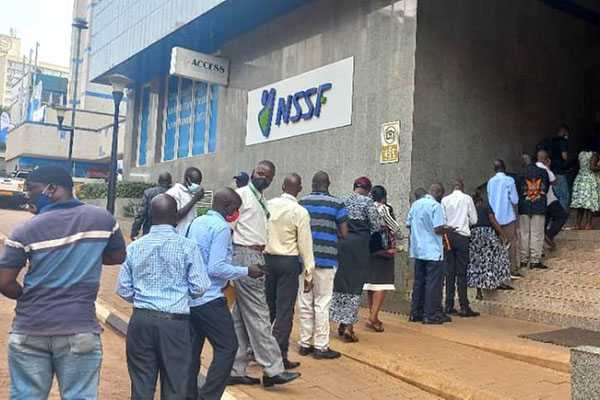 During the year, according to results presented in Kampala yesterday, NSSF’s income declined from Shs1.84 trillion in the 2020/21 financial years to Shs1.77 trillion.

While presenting the performance results during the 10th annual members’ general meeting, Mr Richard Byarugaba, the NSSF managing director, said despite a decline, earnings and  investment income continued to be the biggest driver of assets growth as opposed to contributions.

“Average investment in short-term investments over the past seven years is Shs262b. However, this spiked by over 85 percent to Shs1.78 trillion in the last year in anticipation of mid-term payouts. Investment in short term instruments meant that our interest income was affected. To fulfil our members’ desires, we had to forego a 5 percent growth in income in the short term,” he said.

Mr Byarugaba also indicated that NSSF’s balance sheet size grew by 11 percent (from Shs15.56 trillion), which was consistent with the combined growth in investments driven by contributions and income generated from net of benefits paid out.

During the period, he said, the fund grew to Shs16.96 trillion, while total assets grew to Shs17.25 trillion.

“Growth in the balance sheet comes through a combination of the net surplus (income less expenditures) and net dealings with members (contributions less benefits).The past year, our balance sheet only grew by Shs1.7 trillion (compared to Shs2.2 trillion in 2020/21). The Shs540b drop in growth is mainly due to mid-term access and slump in equity valuations,” he said.  Mr Byarugaba also noted that growth in fund’s contributions was mainly driven by arrears payments of Shs70b while the fund also registered 128,000 new members through mandatory contributions and 5,000 whom were voluntary, which led to realisation of Shs5b.

During the period, the Fund also saw a number of employers reactivating their accounts, out of which, Shs21b was contributed.  Currently,  NSSF has a total membership of 1.33 million members.