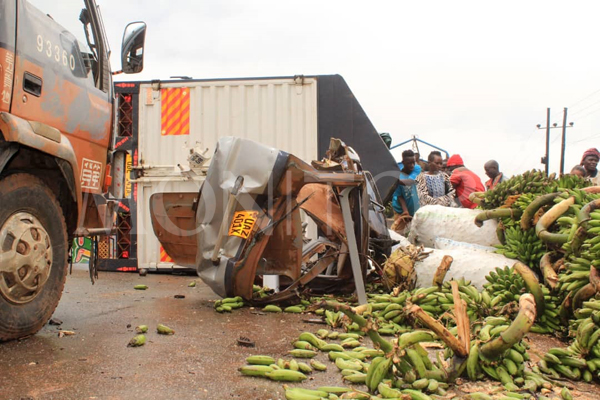 A 16-year-old girl died on the spot on Thursday morning and six others rushed to hospital following a road crash along Kampala-Masaka highway.The morning road crash which happened at Kavule swamp involved a Fuso truck that was loaded with matooke from Masaka side heading to Kampala and a Toyota Noah.

The wreckage of the vehicles which collided at Kavule swamp along Kampala-Masaka road on September 22, 2022. PHOTO/ POLICE

“The motor vehicle overturned and fell on the lane of Kampala to Masaka, found a Toyota Noah reg no. UAZ 401K which was brushed on the sides of the driver side in the process of sliding. So far one female adult has been confirmed dead and around six victims rushed to Double Cure hospital for first aid treatment,” the traffic and road safety spokesperson, ASP Faridah Nampiima said.

The deceased was only identified as Yvone who was traveling in the Toyota Noah with her relatives from Kawempe Division in Kampala and heading to Rukungiri District.

All the survivors were occupants of the Toyota Noah.

The previous annual police crime reports indicates that pedestrians, motorcyclists and their passengers are the largest victims of road crashes. The 2021 Uganda Police Annual Crime Report says there was a 42 percent increase in the number of crashes from 12,249 in 2020 to 17,443 in 2021. More than 3,000 crashes were fatal, and 4,616 survived with minor injuries.The report says on average, Uganda loses approximately 10 people per day due to road crashes.