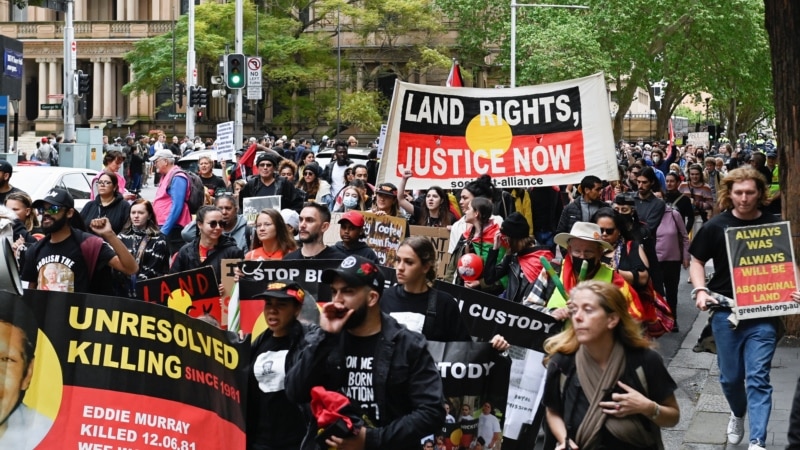 Sydney —
Australia held a national day of mourning for Britain’s Queen Elizabeth II Thursday as Indigenous protesters rallied against the monarch and the impact of British colonization. Australia is a constitutional monarchy and at an official ceremony in Canberra Prime Minister Anthony Albanese praised Elizabeth’s dedication and service. However, crowds have gathered across the country for ‘abolish the monarchy’ protests.
To many Australians, the Queen was a symbol of constancy and dedication, but to indigenous Australians she represented a brutal colonization that stole their land when British settlers arrived in 1788.
Hundreds of anti-monarchists have expressed their opinions on the streets of Brisbane, Sydney, Melbourne and Canberra.
“The Crown has blood on their hands,” a demonstrator said. “Our people are still dying in this country every single day!”
Protesters burned Australian and British flags as they rallied “against racist colonial imperialism.”
“We don’t get time off for our mourning whereas they have set a public holiday for the Queen. I think that the government could consider more about what goes on in Aboriginal communities,” said a protester.
Governor-general David Hurley, the British monarch’s official representative in Australia, has acknowledged the pain and anguish felt by Indigenous people.
“In considering the unifying role that Her Majesty played, I acknowledge that her passing has prompted different reactions from some of our community. I’m conscious and respect that the response of many First Nations Australians is shaped by our colonial history and broader reconciliation journey. That is a journey we as a nation must complete,” he said.
But many Australians have celebrated Elizabeth’s long service as their head of state at events, large and small, across the country.
Speaking at a national day of mourning ceremony in Canberra, Prime minister Anthony Albanese, praised Elizabeth’s dedication.
“This national day of mourning salutes a sovereign who served our whole nation and sought to know it, too. It is fitting that today’s commemorations in our national capital will be mirrored in communities across our country as Australians express their own affection and respect and celebrate the Queen’s part in their own stories,” he said.
Albanese has ruled out holding another referendum on Australia becoming a republic until at least 2025, preferring instead to focus on enshrining indigenous rights in the constitution.
Australia’s rejected severing their constitutional ties to the British monarchy in a referendum in 1999.