Satire: Pilgrims walking 300km are the reason we are still poor – Gen Ota

Satire: Pilgrims walking 300km are the reason we are still poor – Gen Ota 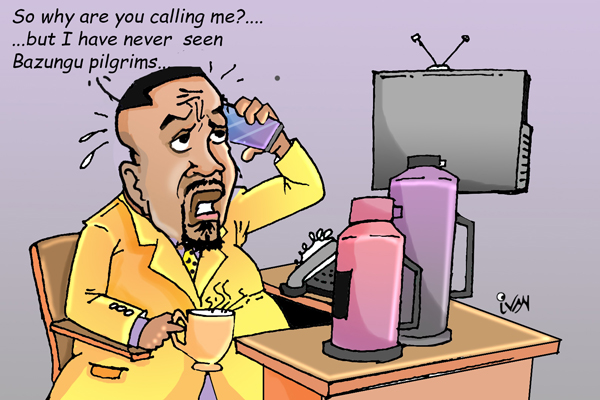 Gen Ota is not known for mincing words. As long as he decides to speak his mind on a subject, he will serve it as is without any sugarcoating. Ahead of the Martyrs Day midweek, I sought his opinion on the event of the month and, as you would expect, he pulled down the kitchen sink on the matter of martyrs.Doot-doot, doot-doot, doot-doot…Ota: Yes, who is this and did you have to wait when I’m having my breakfast to call?Seaman: I’m Seaman, General.Ota: See-what? Don’t let my tea go cold while you’re making an effort to talk. The economy is already bad as it is.Seaman: I’m Sea…Ota: Yes, Mr See, call back after I’m done with this breakfast, I don’t know when that will be, I hardly get time to even breathe without someone interrupting over this and that.When the phone trilled to signal the call had been ended, the message was as clear. There would be no more Ota speaking even if he enjoyed two breakfasts in an hour. But I decided to give it another go just 40 minutes later.Ota: Yes, who is this now?Seaman: I’m Seaman, you said to call back after your breakfast.Ota: Have I told you I’m done with the breakfast? (laughs). Okay, I’m listening.Seaman: I’m calling about Sunday Satire on the issue of pilgrims walking to Namugongo. The government has accorded them police escorts…Ota: Ehhhh! So why are you calling me? Do I look like Enanga to you? Did you hear that I’m the one who assigned police to waste their time and public resources protecting idlers on the road?Seaman: So you don’t agree with the idea of providing security to the pilgrims?Ota: What would my agreement or not change? Africans are stupid, you get that? By the way, are you a journalist? Yes, I figured… put that on record. Say Ota said Africans are stupid, especially those wallowing in poverty.Seaman: But…Ota: Listen. The White man built his shrines around and told Africans stories and Africans are willing to walk 300km to worship, then they start looking for cattle trucks to take them back to Kanungu, Kamuli and Kapelebyong… I don’t even know if the last one exists here. I tell you, this pilgrimage thing, that’s exactly why we are stuck in Parish Development Models.Even in China, people are thinking about planting noodles in Mars and we are here spending 11 months                                                                                                          planning how to walk 300km to a shrine on the 12th month in June. That is a typical poverty mindset. A poor person only thinks about how to have more children and make a fool of himself. The other day I saw pictures of a man, a so-called pastor, lying in dirt and looking up into the clouds, that he was speaking to God. Then a typical impoverished African will commit their entire salary as tithe to such nonsense.Seaman: It’s faith.Ota: Yes, if you mean a woman called Faith walking, I believe you. But if you are talking about the other faith, how come we don’t see White believers doing that pilgrimage? Is it because they don’t have legs?Seaman: Maybe they walk but the media doesn’t report. Besides, the martyrs are ours, Uganda Martyrs. So if you met pilgrims on the way and had a chance to speak to them, what would you tell them?Ota: I would just lock them up (laughs). Anyway, I don’t have the powers. Africans should stop being idle. God exists in the head, not shrines built with towers.I only wish the interview had been real!