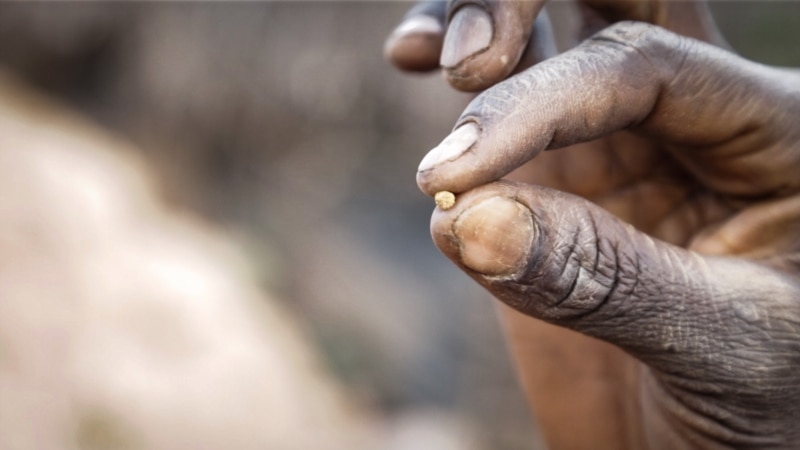 KEDOUGOU, SENEGAL —
Every few minutes, 14-month-old Awa coughs, the phlegm rising from deep within her chest.
Her mother, Meta Ba, says Awa’s been coughing that way for as long as she can remember.
Ba, who suffers from chronic migraines, works as an artisanal gold miner in Senegal’s far eastern region of Kedougou, near the borders of Mali and Guinea.
Gold mining in Senegal plays a key role in the country’s economy, but the use of mercury during the treatment process is harming the environment and the health of the miners.
In Kedougou, home to 98% of Senegal’s gold mines, more than five tons of mercury are used annually.
Health experts say the heavy metal attacks the nervous, digestive and immune systems.
It can harm the lungs and kidneys and impair hearing, balance, vision, thinking and breathing. It can also cause birth defects.

Women make up about half the gold miners in Senegal. Here, women work at a gold mine in the country’s Kedougou region Nov. 16, 2022.

Women make up half of the miners and are charged with treating the gold after it is mined, which involves mixing mercury with ore, then vaporizing the mercury to isolate the gold. They do so without gloves or masks.
Some of the female miners have visible health conditions, such large growths stemming from their throats and drooping red eyes.
They often carry their children with them to work, causing both to suffer the health consequences.

Women make up about half the gold miners in Senegal and often carry their children with them. Here, women work at a gold mine in the country’s Kedougou region Nov. 16, 2022.

“She is still breastfeeding, so I can’t leave her at home,” Ba said. “If I don’t come here to work, how will I survive? How will I make a living?”
But Kedougou’s gold mines are no place for children.
Scores of open pits plunge 15 meters deep, without barriers or markers. There is no safety equipment, and miners say the dust they are being exposed to is toxic.
Still, Awa and other children play and nap just steps from the pits.

The metal also infiltrates the environment, damaging the ecosystem.
“When the mercury is separated from the gold, it creates a vapor that rises into the atmosphere and clings to the leaves,” said Mamadou Drame, president of the Gold Panning Federation of Kedougou. “Then with the rain or wind it leaches into the ground and gets washed into the rivers where the fish are exposed.”
Locals risk ingesting the toxic metal, not only when they consume the fish, but when they eat the crops grown from the contaminated soil or the livestock that graze there.
A 2018 study by Duke University found dangerously high levels of the neurotoxic form of mercury in soil and water ecosystems near artisanal gold mines in Senegal that far exceed World Health Organization guidelines.
Mercury can also seep into drinking water.
“The well is contaminated,” Ba said. “When you drink this water, you know you’ll get sick.”
The toxin does not break down over time. Once an ecosystem is contaminated, future generations will pay the price.
Gold mining in Kedougou is also causing soil degradation and deforestation.

Artisanal and small-scale miners work independently in the Kedougou region. The industry is critical to the miners’ ability to make a living.
Kedougou’s mines employed more than 30,000 people in 2018 and generated $136 million. The region draws miners from Mali, Guinea, Burkina Faso and other neighboring countries.
In 2016 Senegal ratified the Minamata Convention on Mercury, a multilateral agreement that seeks to reduce mercury pollution.
Senegal’s Ministry of Mines and Geology only created an artisanal and small-scale mining department last year and the sector is still largely unregulated.
Abou Sow, who heads the department, acknowledged the urgency of the health and environment crisis.
In 2020 he helped the ministry launch a project to install 400 mercury-free gold processing units in Kedougou.
“Everyone who comes to the center to process their gold will know that there will be no use of chemicals,” Sow said. “We will also establish regulations that will allow us to sanction those who are treating their gold outside the center using chemicals.”
Construction has yet to start, though, and is expected to take at least two years.
Until then, miners like Ba say they and their children will continue to be exposed to toxic elements.
“These women are breathing nothing but toxins all around them,” said Khady Camara, founder of environmental organization Vacances Vertes. “It’s high time the government start regulating this industry.”