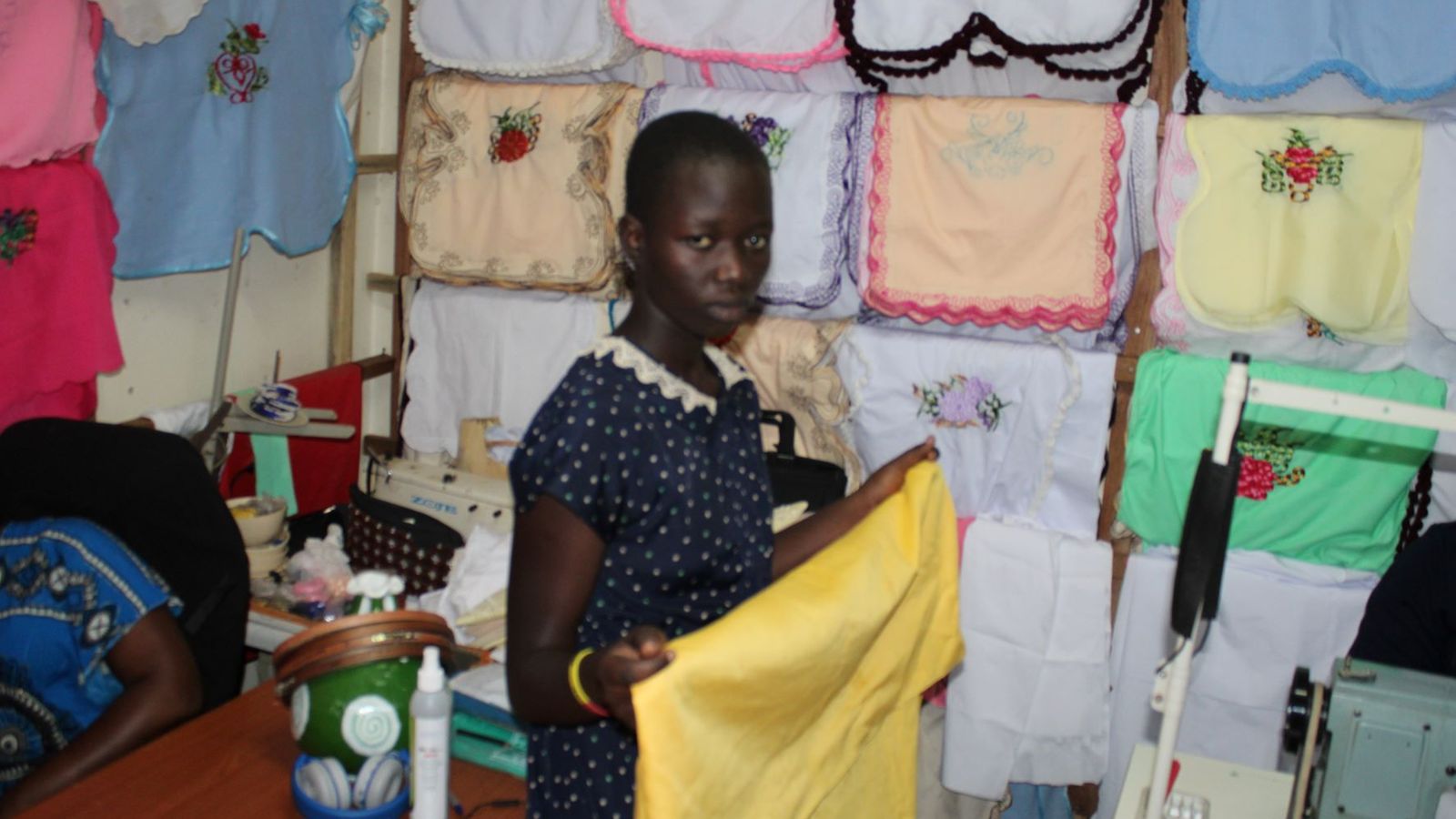 Lydia Laker arrives at Gulu Main Market at 8am to fetch water enough for the daily operations of a restaurant next to a workshop she enrolled into learn tailoring.This source of income must be done before 10 am when the classes start.While seated at her sewing machine learning to stitch pieces of cloth, the former student of Pace Secondary School is uncertain of returning to join her peers in Senior One. The Covid-19 pandemic-induced lockdown and her father’s death interrupted her education dreams. “The lockdown got me off school, and that was very disturbing, but when my dad James Okema later passed on, that was disastrous,” Laker says.Her struggles started in April last year when her dad’s business collapsed due to the pandemic.

Her father used to run a kiosk in Opit Town, Omoro District, where he sold general merchandise. During the lockdown, the businesses started disintegrating, and as a result, her father asked Laker to attend to it while he relocated to the family farm, about six kilometres away.“But something was not right. Some of the little proceeds I made were going to feed the family,  but my dad would use  part of them and take alcohol, he was depressed,” she says.Laker says when the business eventually collapsed, her father became an alcoholic, and developed health complications, leading to his death.

PerseveranceHowever, she was determined to return to school despite lacking the means to support her since her mother had already passed away. When school resumed in January, she attempted to return but lost the initiative when the authorities sent her back home due to lack of fees and requirements.

“At the beginning of term one, I attempted to go to school twice. The first time I was sent home due to school requirements and a month later, I was dismissed because I did not have fees and I just sat back,” the 16-year-old says.Laker then decided to relocate to Gulu City in November last year to seek vocational skills training.“The reason why I am out of school is because of the death of my dad. If he were alive, I would have also returned to class just like the rest of my friends. I was staying with him before his death, but I decided to come to Gulu,” she says.

Laker lives with her 18-year-old brother, who also dropped out of school earlier but now runs a boda boda business and works at a vehicle garage for a livelihood.Born in a family of five, Laker is the second born, and had hoped that she would study to become a medical doctor.“I have taken up vocational skills training [tailoring] as a quick alternative that will get me doing something fast to support my other siblings and run other family responsibilities, although not all hope is lost,” she says.The opportunity to learn tailoring came up in December when Laker, an athlete and footballer, joined Gulu Sprinter Rugby and Football Club in Gulu City.

Her peers had tipped her of the possibility to hook a sponsorship to do vocational skills training.“I was lucky, my friends encouraged me to join their group where we did training in a lot of games, and I later got the opportunity to join the tailoring school with the help of some local NGO,” she says. When she is not training, Laker washes clothes in the neighbourhood for a fee. She earns between Shs5,000 and Shs7,000 a day, which she spends on buying food for the home.Given an opportunity, Laker says she would continue with her secondary education.

Laker needs Shs169,000 for school fees, Shs70,000 for uniform, and Shs131,000 for other requirements.“I will need Shs370,000 to start again which is quite a huge amount that I cannot afford now. However, that amount reduces to only Shs200,000 for the rest of the terms,” she adds.Her plan is to finish the vocational course, and when she begins to make money, she will save some to continue her studies.

The rugby club’s training and games have helped her cope with some of the difficult experiences.“I was going through a lot but during the training sessions, we are counselled and advised on how to live a safe and healthy life as well as life skills tips,” Laker says. Ms Sandra Laker, the secretary of Gulu Sprinters Rugby football club, says they identified the needy girls who dropped out of school and connected them to a tailoring training scheme so that they can earn a living.Ms Laker says there are 13 girls who are members of the rugby club that they have supported the same way.

In January, a report by the National Planning Authority (NPA) showed that at least 30 percent of the 15 million learners (4.5 million)who were sent home after President imposed a nationwide lockdown in March 2020, may not return to school. The report indicates that the problem may worsen illiteracy levels in the country, and hence recommends an immediate implementation of multi-sectoral approach to address the challenge.  The NPA report indicates the deteriorating school dropout situation as a result of the effects of the Covid-19 induced lockdown where many girls were impregnated and became mothers while other learners took on menial jobs to earn an income. These categories, together with those with a poor economic background, are the most vulnerable to drop out.

Educationist Fagil Mandy told this publication in January that there is need for specific interventions to the different categories of learners that are at the risk of dropping out of school. “There are many reasons, some negative, others positive because some students could have acquired skills to survive on. We need to be clear about the actions we take about different cases.  We need to look at the categories that are not coming to school. Some have lost relatives that were supporting them, some have learnt new skills, and some have got fed up of school because they found nothing very useful at school. To the pregnant girls, if you do not study each case, you will not be able to handle it. Each category should be studied and the solution based on their realities,” he said.

According to Mandy, government needs to put in place community programmes to absorb those that will not resume school and further the skills during lockdown. “We need to create other programmes and some should have already started. There is not one programme in the rural areas to deal with teenage mothers. We need community programmes for those who will not come back, for example skilling projects. Skills and knowledge can be acquired outside of formal school,” he added.