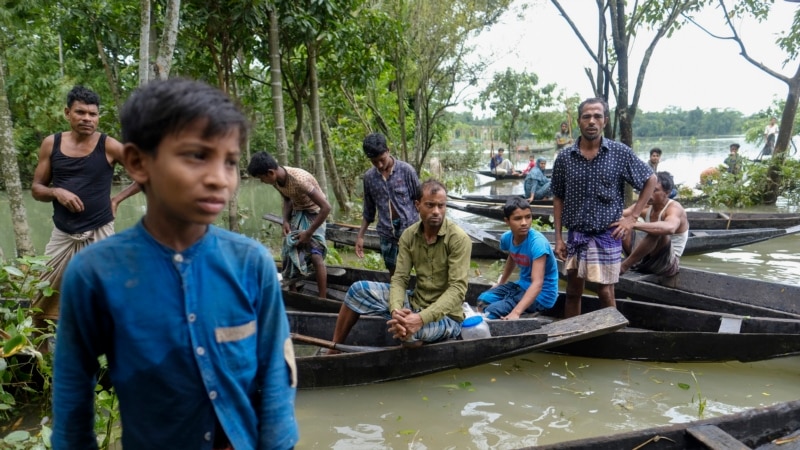 NEW DELHI —
Devastating floods that have washed away homes, drowned rice fields and stranded millions of people in northeast India and Bangladesh in recent weeks are not unusual — flooding during South Asia’s monsoon season has become a virtually annual occurrence.
What is unusual is that vast swathes of land in the two countries disappeared underwater much earlier this year.
“The peak flooding takes place in July and August when the monsoons are in full swing. But this year heavy rainfall began in May and created a disaster situation,” said Tritha Prasad Saikia, joint director of the Assam-based voluntary group, North East Area Affected Development Society.
“The rainfall calendar has changed, the intensity and magnitude of flooding has increased,” said Saikia who has grown up in the state.
Both India’s northeast and Bangladesh have already experienced two bouts of severe flooding – one in May and another this month.
The flooding has led to warnings by climate experts that South Asia’s most vulnerable communities may have to cope with more unpredictable and longer spells of devastation as monsoon patterns change and extreme weather events become the norm rather than the exception.
“The widespread flooding triggered by the heavy pre-monsoon rains this year is unprecedented. This variability in monsoon patterns is due to climate change. What studies tell us is that wetter areas are going to be much wetter, and drier areas much drier,” said Anjal Prakash, a research director at India’s Bharti Institute of Public Policy, who has contributed to the report by the U.N. Intergovernmental Panel on Climate Change. “And this is definitely what we have seen manifested in the flooding this time.”
Instead of steady distribution of rain during the June-September monsoon season, shorter spells of torrential rainfall have become more common, experts say. Assam for example received about double the rain in the first three weeks of June compared to the average rainfall during this period, according to the Indian Meteorological Department.

People wade through flooded waters in Sylhet, Bangladesh, June 18, 2022. At least 18 people have died as floods cut a swatch across northeastern India and Bangladesh, leaving millions of homes underwater.

Flooding is not the only climate-change event affecting one of the world’s most densely populated regions. Experts also point to a brutal heat wave that began scorching South Asia’s vast northern plains as early as March this year as well as cyclones and urban flooding that regularly batter coastal areas.
In India’s northeastern Assam state, where entire villages have been engulfed by the swirling flood waters, authorities say that more than 5 million people have been affected and more than 80,000 are sheltered in relief camps. Over 100 have died.
In Bangladesh, millions have also been affected by the flooding, while the death toll in monsoon-related events is around 60. In the country’s worst-affected districts, Sylhet and Sunamganj, such ferocious floods have not been seen in decades.
In both countries, disaster personnel and the army have mounted rescue operations even as authorities and aid agencies distribute food and drinking water to the displaced people. But damaged roads and bridges are making the task a challenge.

A house in marooned by flood waters in Sylhet, Bangladesh, June 20, 2022. Floods in Bangladesh continued to wreak havoc Monday with authorities struggling to ferry drinking water and dry food to flood shelters across the country’s vast northern and northeastern regions.

“We have relief materials with us, but we are not in a position to reach the hardest hit communities because of lack of accessibility to the worst-hit areas,” Saikia said.
Among those trying to obtain aid is Pabitra Bora, who works for an Assam hydroelectric power and whose three-room house was recently flooded.
“The water gushed in at night. We had no warning and no time to salvage anything. Some neighbors brought a boat and we escaped,” Bora told VOA.
He has taken shelter in a library with his family but says the floods have taken away everything from him. “I have no idea what my future holds — even managing to get two meals a day is difficult just now.”
There may, however, be no early relief in sight. The Brahmaputra River, which runs through northeast India into Bangladesh is flowing above the danger level at several places, even as monsoons are likely to pick up pace in the coming weeks.
“It could turn out to be a long-drawn crisis,” Saikia said, “Embankments and roads are already damaged. How will they be repaired in time for more intense rains that could come in the next two months?”
The impact of events triggered by climate change is particularly severe in areas where millions of people depend on farming small plots of land for sustenance.
In Assam, the first bout of flooding came in May as people were harvesting rice. Much of that harvest has been washed away. In India, this year’s early heat wave shriveled the wheat crop in March, reducing harvests and prompting the government to ban wheat exports.
An International Food Policy Research Institute report last month warned that India’s food production could drop by 16% and the number of those at risk for hunger could increase by 2030 due to climate change.
“Rapid changes due to climate change have been taking place for about five years but we have not taken appropriate action to plan for these,” Prakash said.
“As a result people in climate vulnerable zones are getting trapped year after year in climate catastrophes and are unable to come out of the cycle of poverty.”