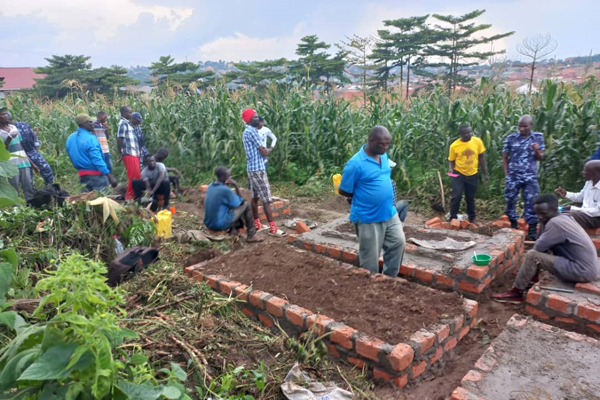 Police are investigating circumstances under which grave-like empty structures were allegedly constructed on a disputed piece of land in Kiteetika-Komamboga village, Wakiso District in central Uganda.Some of the occupants of the land told this reporter that the six structures were built on the more than 10-acre piece of land last Tuesday night by unknown people. The land in question reportedly belonged to Paul Bitarabeho who died in 1990. One of his sons, Mr Mark Paul Bitarabeho said they received an eviction notice from unknown people in June, asking them to vacate.

“We have lived on this land all our lives and we have been carrying out mechanised agriculture but we have never seen any burial grounds on it. However, in June we received people who claimed to be the owners of the land saying that they wanted to renovate the burial site of their relatives,” Mr Bitarabeho said“We resisted and also reported the matter to police. They (perpetrators) always come wearing NRM yellow T-shirts and Muhoozi project shirts. We have no reason to doubt they are the ones behind the construction of these fake graves on the,” he added.

Bitarabeho told this publication that when they demolished the graves, they found them empty.“Police arrested some of our family members for demolishing the grave-like structures that were built by the encroachers at night. If they claim to be the rightful land owners, why do they have to renovate their said graves at night? Mr Bitarabeho asked.The claimed land is currently occupied with a dairy farm, fish farm and crop farm.The grave-like structures were constructed in a maize garden after the crops were mowed.Kitetika LCI chairperson, Mr Moses Asaba said the new claimants of the land are not known to his office or in the village before he advised Bitarabeho’s family to take the matter to the courts of law.

“At my level as an LC1 chairperson I have known this land to belong to Bitarabeho’s family and the current claimants are not known to my office. This case should be taken to court where both parties will be required to produce sufficient evidence to prove ownership,” Mr Asaba said.Kampala Metropolitan police deputy spokesperson, Mr Luke Owoyesigire said the land dispute is known to the police and condemned the act of constructing graves at night before resolving the disputes. Mr Owoyesigire asked the victims to file a court case as they wait for the police’s final report on the matter.