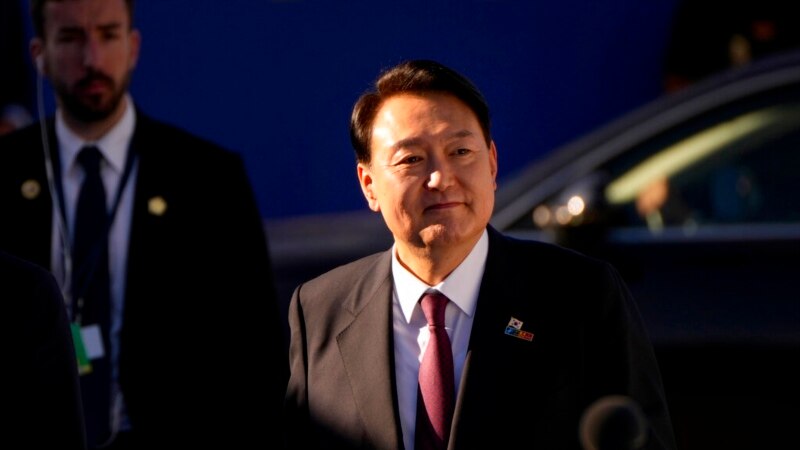 WASHINGTON —
South Korea’s new government has signaled a willingness to consider expanding its use of the U.S.-deployed THAAD missile shield in the face of growing evidence that North Korea is preparing to conduct a nuclear test.
Defense experts say the move, which would reverse existing policy and be strongly opposed by China, makes sense in light of Beijing’s reluctance to curb Pyongyang’s recent series of missile launches.
The previous South Korean administration of Moon Jae-in opted out of deploying any additional U.S. Terminal High Altitude Area Defense (THAAD) anti-missile systems as a way to placate China in 2017, when South Korea received the shield. THAAD, designed to intercept short- and medium-range ballistic missiles, has been deployed throughout the world.
The policy, known as the “Three Nos,” called for no additional THAAD deployment, no participation in a U.S. missile defense system, no formation of a trilateral military alliance with Washington and Tokyo.
The Moon administration floated the “Three Nos” in October 2017 after Beijing launched a costly campaign of economic retaliation against South Korea. Seoul had decided the year before to allow placement of the THAAD system to defend itself against Pyongyang.
At the time, Beijing argued the THAAD system could be used to detect its missile activities. The economic retaliation is believed to continue in some South Korean regions, said President Yoon Suk Yeo’s National Security Adviser Kim Sung-han in February during the election campaign, according to Reuters.
At a parliamentary hearing on July 25, South Korean Foreign Minister Park Jin said, “The Three Nos was not a promise or agreement we made to China but an explanation of our position.”
He continued, “It is difficult to accept the call from China that we should keep the Three Nos policy even though the matter is of direct concern to our national security and sovereignty.”
In a tit-for-tat response, Chinese Foreign Ministry spokesperson Zhao Lijian on July 27 said, “A commitment made should be a commitment kept despite change of government.”
He added, “China’s opposition to the U.S.’s deployment of THAAD in the ROK does not target the ROK side, but the U.S.’s malicious intention to deliberately undermine China’s strategic security.” South Korea’s official name is the Republic of Korea (ROK).
Outdated policy
Experts said the government of President Yoon Suk Yeol is not obligated to follow Moon’s Three Nos in the face of growing North Korean threats and Beijing’s unwillingness to dissuade Pyongyang from launching missiles.
“Things have changed since the Three Nos were discussed,” said Bruce Bennett, a senior defense analyst at the Rand Corporation.
“North Korea’s threat has become immensely greater,” he continued, and “China is failing as a great power” to “rein in the North Korean threat.”
On the same day Zhao spoke against augmenting the THAAD system, North Korea’s leader Kim Jong Un said the country could use its nuclear arsenal in a conflict with the U.S. and South Korea.
North Korea has conducted 18 weapons tests this year including multiple ballistic missiles in violation of U.N. Security Council resolutions.
China, along with Russia, vetoed a U.N. resolution, introduced by the U.S. in May, calling for new sanctions in response to Pyongyang’s accelerated ballistic missile launches.
Patrick Cronin, the Asia-Pacific security chair at the Hudson Institute, said, “At present, probably toward the end of this year, a seventh nuclear test by North Korea will require commensurate moves to ensure deterrence and strategic stability.”
He continued, “Thus, it behooves the Yoon administration to keep open its options regarding what are [its] very [best] defense systems, including THAAD.”
Cronin added, “President Yoon is not obligated to follow the policy of his predecessor. The Three Nos was a political policy out of the Moon administration, not a formal treaty commitment between two states.”
THAAD not for negotiations
Patricia Kim, a fellow at the Brookings Institution’s Center for East Asia Policy Studies, said, “South Korea should clearly convey that it has and will continue to make decisions based upon its national security interests.”
A spokesperson for the South Korean Foreign Ministry told VOA’s Korean Service on Wednesday that the Yoon government’s policies are grounded on a firm position of “protecting the life and safety of its people” as a core objective of its national security “amid heightened nuclear and missile threats from North Korea.”
Asked about Seoul’s position on possible additional THAAD deployments, the spokesperson said, “Anything that limits our national security and sovereign right is not subject to negotiations.”
VOA’s Korean Service contacted the Chinese embassy in Washington requesting comments on Beijing’s position on an additional THAAD placement in South Korea and was referred to Zhao’s July 27 comments.
David Maxwell, a senior fellow at the Foundation for the Defense of Democracies (FDD), said, “President Yoon and the people of South Korea are not bound by any agreements that put their country and the lives of its people at risk and the Three Nos does just that.”
Maxwell added, “We should expect China to undertake economic warfare against the ROK as it did in 2017.” He continued, “This time, it is imperative that the U.S. and like-minded democracies come to the economic defense of the ROK and continue to call out China for its flagrant disregard for the rules-based international order.”