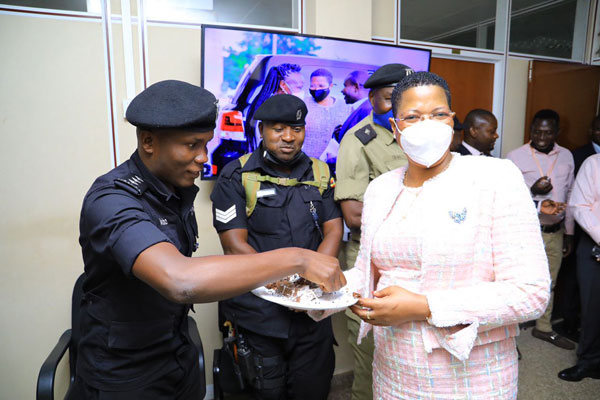 Police and Parliament have intensified investigations into the circumstances under which Parliament Speaker Anita Among’s chief bodyguard mysteriously disappeared about a fortnight ago. Mr Aggrey Aruho, an assistant superintendent of police by rank, absconded and is reportedly in the United States (US) where he travelled ostensibly to attend the 34th Uganda North America Association (UNAA) convention.

The yearly gathering took place in San Francisco in the state of California from September 2 to September 5.

READ: Public uproar over Shs2.4b luxury cars for Speaker, her deputyPreliminary inquiries show that the Speaker’s security chief , before vanishing, had communicated that he was indisposed, only for Parliament to discover that he was already overseas.Investigators are examining information that some staff of the House may have facilitated ASP Aruho to obtain a US visa to fly out without reference to, or knowledge, of Speaker Among herself.

His disappearance was followed nearly a week later, on Thursday, with a proclamation by Ms Among during plenary that her official motorcade was being trailed and she had received a reportshowing a plot to assassinate her.“I have got a report and I have only shared this with the Leader of Opposition and now I can officially tell you [MPs] I have got [a] report [of a plot] to assassinate me,” she said, adding, “…my car is still followed up to now.”

The Speaker did not disclose the mastermind and, without explaining why she never formally notified police whose personnel protect her, revealed that she had only confided in the Leader of Opposition in Parliament, Mr Mathias Mpuuga.It remained unclear why Ms Among, a former Opposition subscriber-turned-member of the ruling National Resistance Movement (NRM), chose to share a sensitive information about her security with Mr Mpuuga and not higher-ups in her own party or the State.As detectives began inquiries, Parliament leadership immediately suspended Mr Louis Bakyenga, the principal private secretary to the Deputy Speaker, and Mr James Bamuwamye, a protocol officer, both reported to have processed travel for a Parliament team to UNAA convention, for their alleged involvement in processing Aruho’s travel documents to the US.

The House entourage to the convention was, at the delegation of Speaker Among, led by Deputy Speaker Thomas Tayebwa.Highly-placed sources told this publication that ASP Aruho appeared to have exploited the opportunity to process a US visa, although he paid for his flight. Those formally on the trip included select lawmakers and Parliament staff.“This [travel and disappearance of Aruho in the US] has nothing to do with [Deputy Speaker] Tayebwa,” Mr Chris Obore, Parliament’s director of communications and public affairs, said.

He added: “Aruho end[ed] up finding himself in the delegation facilitated by James and Bakyenga (both Parliament staff.) In fact, he [Aruho] bought his own air ticket. He was dodging to be detected by the system.”Mr Adolf Mwesige, the Clerk to Parliament, subsequently summoned and tasked the duo to explain the circumstances under which they handled the formalities for Mr Aruho travel to the US where he disappeared.

We were unable to speak to both Mr Bakyenga and Mr Bamuwamye for this story, or establish what they told the Clerk to Parliament. Mr Fred Enanga, the Police spokesperson, said he required to first verify with Police’s Human Resources Directorate before commenting on ASP Aruho’s whereabouts and profile. However, Mr Obore said: “The issue of Aruho is a matter of the Inspector General of Police (IGP) who is the deploying officer. For the staff of Parliament who facilitated his travel, the Clerk to Parliament will handle them according to the established rules and regulations.”

The inclusion of the police officer for US visa as part of the team led to UNAA convention by the Deputy Speaker, has triggered concerns about the safety of Speaker Among.There is, as of yet, no official explanation for the escape of the chief bodyguard and scoping of its full security implication is still underway since parliamentary sources said this is the first case of its kind in history for the institution to deal with.The Speaker of Parliament is the third most important citizen in the country, according to the National Order of Precedence.

A scare about the safety of the office holder – in this case spotlighted by escape of the security chief of the incumbent followed by assassination plot claim – has nudged police and the House to unearth the unknown with speed.There is nothing to suggest that the chief bodyguard was aware of any risk to his principal who publicly proclaimed the threat only a week after the police officer crossed the Atlantic.  Parliament’s Division Police Commander (DPC), Mr Steven Agaba, yesterday said the Force had declared ASP Aruho a “deserter”.“He has not yet communicated to my office about his departure. All his known contacts including WhatsApp [lines] are off. Since he was not on official duty, he will be charged for being absent from duty without leave should he come back,” the DPC said.

Clause 59(2)a of the Police Act provides that a police officer is presumed to have deserted if absent, without authority, from duty unit or formation where they are required to be.The offence attracts one year imprisonment, if convicted by a criminal court.A highly-placed source told this newspaper last evening that ASP Aruho informed some Parliament staff that he decided to join his family that lives in America, and that he left all police property-  gun, uniform, boots and official Identification Cards – in Uganda and they should be accessible to the Force.READ: New Speaker Among rejects Oulanyah office