Speaker Among calls for speedy trial of MPs Ssewanyana, Ssegirinya

Speaker Among calls for speedy trial of MPs Ssewanyana, Ssegirinya 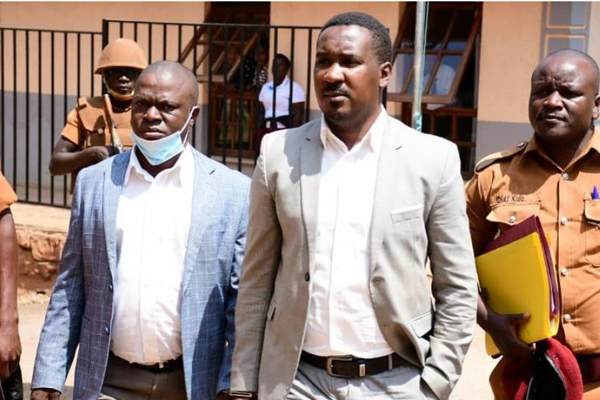 The Speaker of Parliament Anita Among on Wednesday asked government to expedite the trial of Makindye West MP Allan Ssewanyana and his Kawempe North counterpart Muhammad Ssegirinya who have spent  a year on remand on charges related to last year’s spate of killings in greater Masaka which left about 26 people dead.

“Hon members, as the head of the institution, all MPs here belong to the Speaker. My two members of Parliament (Ssewanyana and Ssegirinya) make one year in prison today. I request and plead with government for a speedy trial for these members so that they can represent their constituents because today’s it’s them, tomorrow is someone else,” she said moments after the Leader of Opposition in Parliament, Mathias Mpuuga questioned the delayed prosecution of the two members of the opposition National Unity Platform (NUP).

The two MPs, who are jointly charged with five others, have been in detention for one year on a string of charges which include murder, attempted murder, and aiding and abetting terrorism. The charges stem from a series of attacks that claimed about 26 people within the greater Masaka region between March and June 2021.Previous attempts to secure bail have been futile and recently, the two legislators lost an application for compensation amounting to Shs300 million and a declaration that their re-arrest on September 21, 2021, shortly after being granted bail was a violation of their human rights. Yesterday, Opposition MPs led by Mr Mpuuga attended the afternoon plenary sitting clad in black suits as a sign of commemoration and raising a red flag over what he called an injustice.Mr Mpuuga described the detention as a deliberate effort to persecute the MPs and an attack on the constitution adding that he has previously tried to reach out to Chief Justice Alfonse Owiny-Dollo and Principal Judge Flavian Zeija over the same without success.

“We are very concerned and disheartened over circumstances of their continued detention. Clearly the state is persecuting them because there’s no other meaning of detention without trial other than persecution. It’s clear that they were arrested before investigations were made and it’s very disheartening. They are Members of Parliament. So, for a full year two constancies are without representation in this August House. I tried to reach out to the Chief Justice and Principal Judge over this matter because I equally think the judiciary is culpable in their continued detention and they need to raise to the occasion. The two officers did not respond to my plea. Imagine the Chief Justice and Principal Judge not responding to an official request by the Leader of Opposition. The judiciary too is indictable in this. It’s not my business to interfere with their work but it’s my business to raise a red flag when they become flimsy in their business, just like Parliament is called upon to do its work judiciously,” Mr Mpuuga told Parliament.

Mpuuga added that the two MPs will require special intervention from Parliament, saying that there seems to be a syndicate to have them in detention against the Constitution which is clear about the rights of those in detention.“These two members will require a special intervention of Parliament. It’s a syndicate, in our view, to have them in detention against the provisions of the constitution. Probably our Constitutional order has broken down and people are taking matters into their hands. Probably this House of Parliament will be the last firewall for citizens who have been trampled upon by the State…I don’t want to say that the Judiciary has joined in connivance but we are asking of the Judiciary to do its work to uphold the rights of citizens without undue interference by the State,” he said.

He equally questioned the government side on its failure to account for 15 Ugandans whose names he tabled before Parliament after they went missing. Mpuuga said that citizens are still being picked from different parts of the country by security operatives and not produced before the courts for prosecution.“These are very compelling times, it’s not just about MPs…it’s about every citizen. It is very disturbing and I hope the Prime Minister will come to this Parliament and probably declare a state of emergency in this country…Constitutional emergency,” Mpuuga said.

We’ve been calling for international criminal justice against Gen. Museveni and his criminal gang. The world must not continue to ignore the abductions, torture, murder and rape of political opponents. Unacceptable! More than 10 days, Nalubowa Teddy is still held incommunicado. pic.twitter.com/FCGmrPm2wh— BOBI WINE (@HEBobiwine) September 7, 2022

The Shadow Cabinet is scheduled to visit the two MPs at Kigo Prison on Thursday.