State-of-the-Nation Address through the lenses of citizens

State-of-the-Nation Address through the lenses of citizens 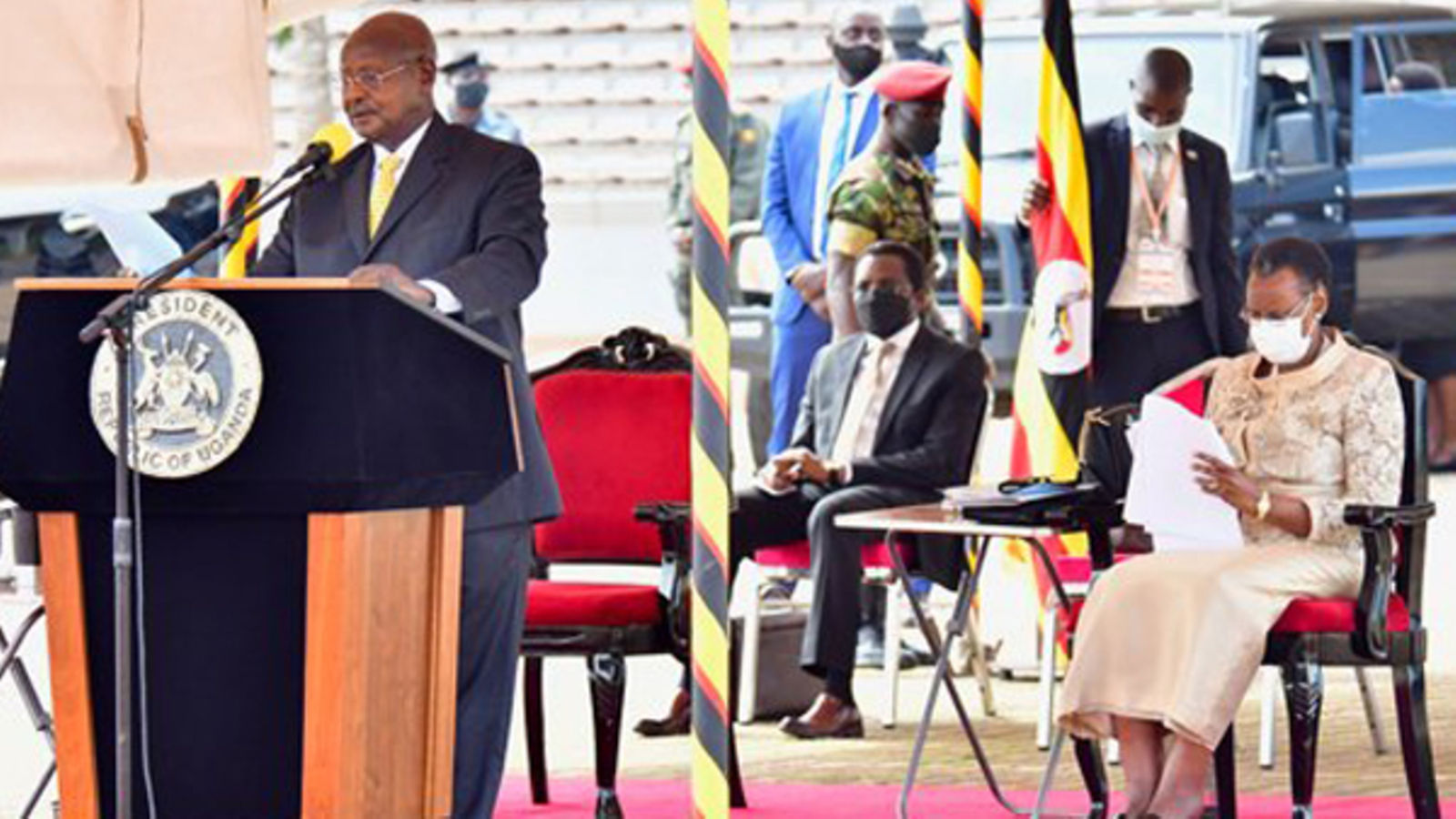 The wait is over. Today, Ugandans will listen to President Museveni attentively as he sits on the revered chair to lecture them once again on the State-of-the-Nation.

The country is currently battling the spiraling commodity prices, which the President attributed to both external and internal factors.

In his recent address to the nation, Mr Museveni dismissed the idea of tax waivers and subsidies to businesses, arguing that it is not sustainable, leads to loss of revenue and that even if such incentives are offered, it will only benefit the already rich, who may not reduce prices. To James Mr Ochama, a resident at Kisasi slum on the northern bypass, said the current situation presents a stark reality.

Mr Ochama, a casual labourer at Tirupati Industrial Park at Kyebando, says the current economic situation has forced many people to the brink of starvation.

“I don’t know whether my family will be alive by the end of this year. What we used to buy for Shs1,000 now goes for more than Shs5,000 and I am afraid we may not survive. The President should really offer a solution,” he says.

Mr Brian Agaba, a boda boda rider in Makerere, Kikoni, told Daily Monitor that he expects the President to address the issue of high fuel prices.

“The President should find a solution to the high fuel prices because as boda boda riders, it is our source of income. We use the money we get from it to pay school fees for our children and feed our family members,” Mr Agaba said.

Mr Frank Muwulya, a shop attendant in Bwaise, a Kampala suburb, says they are struggling with high taxes on goods. He expects the President to tackle the issue.

“The taxes are too high, for example cooking oil, they now tax every packet and not a single box of cooking oil,” Mr Muwulya said.

Across the country, the wails are getting louder, while Mr Museveni insists he will not intervene to stabilise the prices, but leave it to the forces of demand and supply. Daily Monitor spoke to a number of ordinary citizens across the country and brings you their voices.

What Ugandans want to hear

Henry Adriko, guard in Muyenga. “High commodity prices should be the first thing the President should talk about. Some of us now have one meal a day. You either choose or super.’’John Ssekayombya “The President must announce measures to deal with corrupt officials and make sure that criminals, including drug abusers face the law. Today, it is hard for a poor man to win a case because criminals bribe them.’’

Mariam Namuddu, KCCA worker. “I have not been paid for months yet I have to take of a family of eight people. If the President can think of giving some relief items to the poor, we shall be grateful.’’

Mbabazi Musimenta, 46, farmer in Rukungiri. “This situation has forced us to eat once a day because the prices of food have increased and this has greatly affected the health of our young children.’’

Robert Ssebalamu, resident of Kalangala Town Council. “The President is fond of giving the history of this country accompanied by the status of security rather than talking about the rising cost of living. Let him offer practical solutions.’’

Rodgers Tugume, a boda boda rider in Kabarole. “The President should tell us what the government is doing to address the problem of increasing fuel prices, the price is not going down.’’

Thomas Nyesigire, boda boda rider in Mbarara. “Let government reduce taxes and give subsidies to local manufacturing companies so that the prices of commodities can reduce. If other countries have done it, why say it’s not possible here.’’

Immaculate Nakku. “It is self-defeating for Museveni to say that there is no solution to the current problems. Let the President give Ugandans hope on the current situation of rising commodity prices, not his usual political rhetoric.’’

Pr Patrick Ddembe, Mukwano Road. “There are people who are helpless. They don’t have jobs yet they have families to take care. If someone gives you Shs10,000 and the price of a bar of soap is also at Shs10,000, how is such a person supposed to survive?’’

Phionah Nabulwa, a resident of Masindi Town. “I expect the President to address the issue of high food prices and he should tell us how we are going to be protected amid all the escalating prices of different commodities.”

Rajab Kinalwa, resident of Mpigi Town Council. “President Museveni is fighting to stay in power. The citizens are desperate and if it wasn’t his coercive regime, they could have forcefully shown him the exit.’’

Ritah Ayuma, businesswoman in Malaba. “The President should say something about high fuel prices because it’s the cause of skyrocketing prices of commodities. Our sales have declined because transport cost keeps increasing.’’

Robert Edwomu, journalist.  “The current price of cCommodity is very challenging bearing in mind that as journalists, we don’t get good pay from our work places. We are feeling the pinch.’’

Sharifah Nakku, trader in Nakasero. “We used to buy a small box of mangoes at Shs10,000. It now costs Shs30,000. The prevailing situation has forced us to increase the prices, but the truth is, customers do not have money.’’

Apollo Kwebiha, special hire driver. “The problem with Uganda is leaders who are corrupt, selfish and greedy. President Museveni should focus on eradicating corruption, selfishness and greed among leaders.’’

Rebecca Nakamata, resident of Masindi Town. “I want to hear what the President will say about the issue of high prices of commodities. You can imagine a kilogramme of maize flour is at Shs3,500.’’

Alosius Katureebe, teacher from Kamwenge. “The cost of living is high and as teachers, we are also suffering because the parents are not paying fees in time. President Museveni need to address the nation on what the government is planning for the economy.’’

Eve Adulai, Soroti City resident. “Despite the high cost of living, the employer has not considered increasing salaries and the government is not also bothered. We are orphans in this country.’’

Madinah Kutesa, businesswoman. “I expect Mr Museveni to reduce the taxes of some commodities because as business people, we will no longer get much from our business.’’

Doreen Faith Akajo, student at Mubs.“The current cost of living is extremely high and worrying, especially for us students. Most of the students are opting for part time jobs in order to make ends.’’

Salume Among, journalist in Soroti. “We have had to forego certain things such as evening tea because of the high cost of sugar. Government should reduce the cost of governance.’’

John Lukyamuzi, 66, guard. “The government should come up with an emergency fund to cater for its people during social and economic hardships. The vulnerable groups like the elderly and those with chronic illnesses need help.’’

Ali Kakaire, news vendor in Mbale. “Life has become hard on the street. The money I get is not even enough to feed my family. President Museveni should help us and make this country habitable.’’

Dinah Amwanga, businesswoman in Tororo.  “We expects the President to say something on skyrocketing prices of commodities and increment of school fees. We cannot  afford paying fees for our children.”

Kenneth Kwesiga, trader in Mpigi. “Our State of the Nation address is simply a ritual, I don’t think Museveni can change anything now. He should think of handing over power to someone more dynamic.’’

Deus Kalwanyi, resident  of Buligo Village, Bujumba Sub-county. “The current situation has exposed the government’s nakedness. Corruption has thrived over the years without tackling it. Now, we need to help ourselves individually.’’

Rukia Adong, a resident of Masindi. “The President should tell us how they are planning to manage escalating fuel prices because if fuel prices remain high and the prices of commodities will be high.’’

Gerald Bizimana, Kabalagala.“I expect the President to speak about the current high commodity prices, the causes and also give us the possible solutions since it’s the situation at hand.’’

Vincent Kitariko, a boda boda rider in Kabale. “President Museveni should consider lowering the prices of fuel at all costs because the transport system is about to collapse. When clients are not willing to add a single coin in case they are asked to do so.’’

Papsquin Akello, resident of  Lira City  “Ugandans should expect nothing new. Whether the President addresses the nation or not, nothing changes. His advisers should tell him to increase the salary of government workers.’’