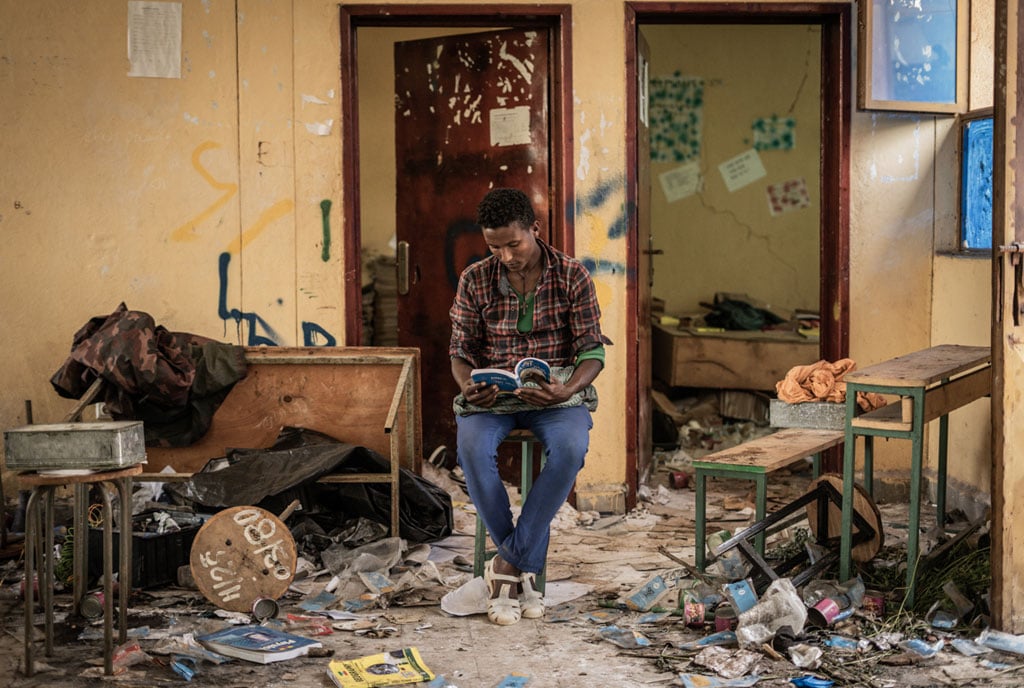 Ethiopian photojournalist Amanuel Sileshi has won the top prize in the 2022 East African Photography Award (EAPA) competition for his story that captures the effects of the war in the Tigray region in northern Ethiopia.

Sileshi’s story titled “Searching For Peace Amidst Chaos” documents the civil war between Tigrayan separatists and the central government of Ethiopia and its Eritrean allies.

His visual account of the war reminds us of a conflict often forgotten by the international media.

Both sides stand accused of atrocities, and have suffered horrifying losses. On November 2, the warring sides formally agreed to a permanent cessation of hostilities in the two-year war. Previously, the war remained largely invisible, despite displacing millions. The restriction on reporting didn’t stop Sileshi’s camera from clicking away.

The body of work he managed to put together is compelling. In one image, we see empty bullet castings and soldiers covering their noses as they navigate the scene of a massacre of civilians.

“I wanted to show that in wars, there are innocent people involved and I was focusing on showing these lives affected by the conflict,” he said, adding, “It’s a great opportunity to win the East African Photography Award. I think it shows that any photographer can do these kinds of stories and tell them to the world. I believe it is important to use photography to show the human aspect of life.”

The winners of the 11th edition of the annual Uganda Press Photo Award (UPPA), as well as the fifth edition of EAPA and the seventh edition of the Young Photographer Award (YPA) were announced at an awards ceremony held at MoTIV Uganda in Kampala on October 18.

Sileshi, who was not able to receive the prize in person, won himself a Canon EOS R6 with a kit lens, Canon TS 3140 printer, and other prizes.

“It feels nice to be recognised by your work as an African photographer. It is a privilege to tell stories in our communities,” Sileshi told Saturday Monitor in an email interview, adding, “I was given access to go and document, but it is at your own risk, you know. But I needed the story to be visible to the world.”

As to how the war has affected the local people in the conflict zone, Sileshi says:  “Well, you know war always affects the people who live in rural and remote places. Many homes have been destroyed, and many livestock lost. And the sad thing about it is that there are many who haven’t returned to their homes and are still living in IDP (internally displaced persons) camps. That is what motivated me to do this work to see and get reactions from the people.”

An Addis Ababa-based photojournalist, Sileshi has made it his life’s mission to document the changes and effects caused by humanity regarding conflicts, wars and political reforms.

In 2016, he started experimenting with the medium of photography by taking pictures of his community. Thereafter, he decided to become a full-time photographer. He began freelancing for NGOs and music concerts.

In 2020, Sileshi started working for Agence France-Presse as a stringer.

“Searching for peace amidst chaos” was awarded an Honourable Mention at the World Press Photo contest earlier this year. At the EAPA competition, it went all the way.

The second EAPA prize went to Gordwin Odhiambo (Kenya) for his project titled “A changing community and the fears ahead.” The body of work explores the rapidly changing neighbourhoods and lives of those experiencing the loss of their homes in the name of public infrastructure projects in Nairobi, Kenya. Even when the resulting evictions do not lead to human rights abuses, they still shatter communities.

Odhiambo’s images address the decisive and divisive development policies in the housing system and their consequences for access to social well-being in these uncertain times, during and after the Covid-19 pandemic.

“For those of us born and raised in Nairobi, the sense of place we used to have while growing up has drastically changed,” he said, adding, “New structures, political changes and waning housing affordability leave us facing an uncertain future in and around the city that we call home.”

Robert making kerosene lamps (known as tadooba in Luganda) in his workshop in Kampala. The image is part of Andrew Kartende’s story titled “Next life.” PHOTO/COURTESY

Ericky Boniphace from Tanzania took the third EAPA prize for his project titled “Even the dead can’t escape climate change.” His body of work captured the relocation of graves from the Vingunguti Cemetery located near Dar es Salaam’s Msimbazi River to a new site. In recent years, the changing climate has meant the level of the river has risen. It has now begun to erode the river bank on which the cemetery sits.

After several graves were swept away by high water, authorities made the difficult decision to relocate 200 graves from where they were originally sited to a new cemetery at Kitunda Mwanagati.

“Workers were employed to disinter the remains of those buried in the graves, while some family members, who came to witness the process, found themselves grieving anew,” Boniphace said, adding,

“The loss of this cemetery is a sign of the scale of the changes we face in this climate emergency.”

Ammar Abdallah Osman’s “Man with nobody” was chosen as the winning single image in the EAPA and was also selected as the winner of the Human category.

Ammar is based in Wad Madani in Sudan. He started photographing three years ago. He loves to tell stories through his images. He dreams about being one of the best photographers of his time and making photographs that go down in history.

“I took this photograph to reflect that feeling of loneliness from the sadness within you, even if you’re surrounded by people,” he told Saturday Monitor, adding, “It is the first competition I joined and I submitted a picture I took on my phone. I don’t have a camera, so starting with what you have and succeeding feels great! No matter what, circumstances don’t make a person; it’s the other way around.

Ammar received a Canon EOS RP and TS 3140 printer along with other prizes. Badru Katumba (Uganda) and Margaret Njeri Ngigi (Kenya) were recognised as the winners of the Planet and Imagine categories respectively.

In the second place in the Human Category was Andrew Kartende (Uganda) for his image “Re-Use” that shows Robert—an ironmonger in Kiteezi, Kampala—who makes small kerosene lamps out of tin cans for a living. Steel can be recycled over and over again, indefinitely, with no loss of its essential properties.

The kinds of up-cycling done by makers like Robert forms the basis of a micro-economy for people living around Kampala’s major landfill sites. It allows them to earn a living while helping to reduce waste and protect the environment.

Uganda Press Photo Award (UPPA)This year’s UPPA competition saw a new format introduced to engage with photographers and their audiences in a new and exciting way. Ugandan photojournalists and photographers were invited to submit a body of work responding to the theme of “New realities”.

It is often said change is the only constant, but in recent years, change seem to be happening faster and affecting more people. Digital culture is displacing traditional cultures, the pandemic upended lives and livelihoods, and climate change and the rising cost of living seem to change our very realities every day.

Kartende’s response to this theme, a story titled “Next life,” was chosen as the best effort to picture new realities in Uganda. The photo essay explores how up-cycling done by makers such as his protagonist, Robert, forms the basis of a micro-economy for people living around Kampala and how it allows them to earn a living while helping to reduce waste and protect the environment.

Kartende is a freelance documentary photographer based in Kampala. His experience comes from working with people from different industries and backgrounds, and understanding meta-narratives. He finds it a privilege to be able to pass through areas few people ever get to see, soaking up the sceneries from hidden perspectives and bringing that to the public through his lens constantly pushed by the urge to tell the story.

“My story, ‘Next life’, is very special to me because it’s native to my country, Uganda. I wanted to approach the up-cycle movement that is taking over the world right now,” he said. “I choose to do documentary photography because I believe the stories we tell live on and can, and will still matter 10 or 20 years from now. Photography helps me to see the world in different perspectives.”

Kartende went home with a Canon EOS RP and TS 3140 printer along with other prizes.Miriam Watsemba placed second, thanks to her story “How to survive a pandemic.” Before Covid-19 swept the world in 2020, Timothy Tulibatono, 29, was teaching in a school in eastern Uganda. The Uganda government pursued a policy of mandatory lockdowns, including the longest period of mandatory school closure in the world. This left teachers in a rough place.

“Every time the President addressed the nation, the opening of schools was postponed. After four months of waiting, I had to find an alternative,” Tulibatono says.

Unable to make a living from teaching, Tulibatono turned to construction and joined a site in Mbale Town where—in an ironic twist—he now earns more to build classrooms than he was paid to teach in them.

But in his heart, Tulibatono is still a teacher. On Sunday afternoons, he talks to girls in his village after the church service.

“My hope is that talking to them regularly will encourage them to be patient and look forward to finishing school first before marriage,” he says.

YPA is an educational award geared towards passionate emerging photographers looking to cultivate a career in documentary photography or photojournalism.

The winner of the competition, together with the runners-up, get the opportunity to participate in an intensive mentorship programme.

The programme is designed to give young photographers a chance to learn more about photography through a boot camp-style course and to develop a documentary photography project under the guidance of an industry professional.

This year, Isaac Henry Muwanguzi, a graduate of the Margaret Trowell School of Industrial and Fine Arts at Makerere University, was recognised as the winner of the YPA.

Muwanguzi is a photojournalist currently working with Next Media, where he leads a team of three other photographers.

He received a Canon M50 MK II body with kit lens, and Canon TS 3140 printer, as well as an invitation to participate in the Emerging Photographer Mentorship Programme, during which he will have the opportunity to develop his project further and exhibit his work during UPPA 2023.

“I can’t wait for the opportunities that are going to come up with [the award], including the mentorship as it will allow me to create a much bigger impact,” Muwanguzi said, adding, “The story I want to tell that is close to my heart and that I’m passionate about is about people living with disabilities.”

All the winners in the competition organised by FOTEA Foundation received professional-level camera equipment sponsored by Canon.

The prizes awarded are tools of the trade that enable the winners to continue their work and hone their skills.

An exhibition showcasing all the winning images from this year’s three competitions that opened to visitors on October 20, at MoTIV in Kampala, will close on November 20.

The show also includes work from last year’s winner of YPA Timothy Akolamazima and runner-up Martina Nalunkuma. Both will present their outcomes of this year’s Emerging Photographer Mentorship Programme.

A small exhibition honouring the work of the late photojournalist Sumy Sadurni also forms a part of this year’s showcase.

An online exhibition in collaboration with .showroom is taking place in the metaverse.