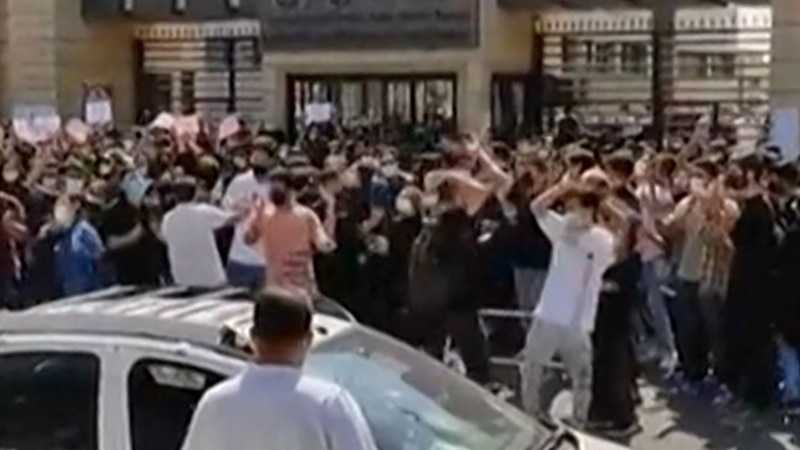 Cairo —
Protests were reported Saturday at more than half a dozen Iranian universities as government security forces scrambled to crack down, firing at protesters in the capital, Tehran. The protests followed violent clashes between protesters and security forces in the Baluchistan capital of Zahedan, in which at least 20 people were reportedly killed, including three security force members.
Iranian security forces opened fire on dozens of protesters in the Iranian capital Saturday amid growing tensions in numerous Iranian towns and cities on the 14th day of popular protests against the government. Protests began after 22-year-old Kurdish woman Mahsa Amini died in the custody of the government’s notorious morality police, having been detained for flouting rules about wearing headscarves.
At least 20 people, mostly protesters, reportedly were killed Friday after security forces fired on them in Zahedan. Amateur video showed protesters on the ground, bleeding, after being shot while protesting. Iranian government media claimed security personnel opened fire on protesters after they tried to storm a police station.
Several government buildings and police vehicles were reported to have been damaged during Friday’s violence. The Iranian government accused what it called “foreign agents” from a handful of countries for provoking the violence in Baluchistan.
Hundreds of students could be seen in amateur video posted online protesting Saturday at least half a dozen Iranian universities, including Shiraz University, Mashhad University, Yazd University, Fares University, Zangan University, Bahonar University, and North Tehran University.
Mehrdad Khonsari, a former Iranian diplomat based in London, told VOA that government security forces continue to have the upper hand in the protests, but “smaller protests are being organized in many towns and cities” to avoid government security force dragnets.
“The machinery of repression,” he notes, “is too powerful for ordinary protesters who are demonstrating empty-handed, so to speak.”
Khonsari argued that unlike previous protests in recent years, where economic motivations prompted popular protests, this time around “protesters are clearly demanding regime change,” against what he calls Iran’s “deep state,” including Supreme Leader Ali Khamenei and the Revolutionary Guard forces.
“The target of the protesters — all their venom is aimed at the ‘deep state,’ and they have one demand, one solitary demand and that is a new constitution based on popular sovereignty, in other words, the will of the people, whatever that may be, and an end to this theocratic dictatorship,” Khonsari said.
Saudi-owned al-Arabiya TV reported that former Iranian Prime Minister Mir Hossein Mousavi, who led Iran’s failed 2009 Green Revolution, has “called on the country’s armed forces to stand with the people against the regime.” VOA could not independently confirm the claim.