The last moments of Uganda Martyrs

The last moments of Uganda Martyrs 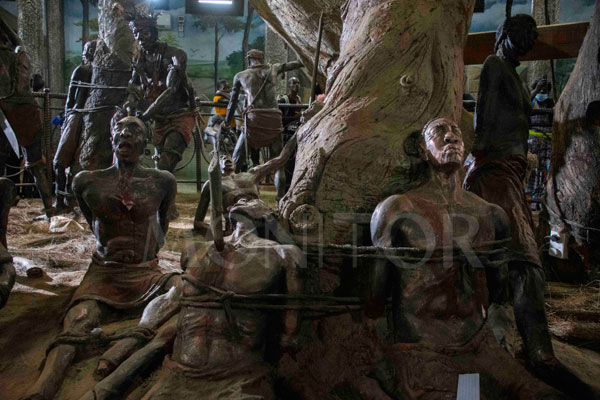 “As the flames rose, their voices could be heard praying and encouraging one another.” The last words of the young Kizito were “Good-bye, friends. We are on our way.”

This is how missionary Aylward Shorter, who has written extensively on the role and impact of the Catholic Church on modern East Africa, describes the last moments of Uganda Martyrs.June 3, 1886, marked the climax of the execution of the Uganda Martyrs on the orders of Ssekabaka Mwanga II, the king of Buganda.  On this date, three Christian converts were burnt to ashes at the Anglican Shrine while 12 were killed at the catholic shrine.

At least 45 martyrs were murdered 137 years ago for faith. Among these were 23 Anglicans and 22 Catholic converts and a number of Muslims who are believed to have been executed earlier.  On May 26, 1886, the king summoned 26 royal pages, who had embraced Christianity, and asked them to denounce the new faith, which they rejected.  They all declared that they were prepared to remain Christians until death. This angered Mwanga and he decreed that all of them be marched to Namugongo, where they would be burnt alive.Rev James Martin, S.J., a Jesuit priest, author and editor, writes in one of his articles on Uganda Martyrs, that even after reaching Namugongo, bound with ropes, shackles, iron rings, and slave yokes, they waited for one week.

During that time, Rev James writes “the chained martyrs prayed and sang hymns; the Catholics among them recited morning and evening prayers, grace before and after meals, as well as the Angelus and the rosary, in preparation for their death.” In the story of Uganda Martyrs (June 3, 2011), Rev James writes: “On June 3, before the execution of the rest of the young men, Charles Lwanga was put to death by the king’s men. He was wrapped tightly in a reed mat, a yoke was hung on his neck, and he was thrown onto a pyre. Taunting his executioners, Charles is said to have shouted, “You are burning me, but it is as if you are pouring water over my body!” Before he died, he cried out, “Katonda,” or “My God,” in gruesome fashion. The young converts, mainly men, had been made to walk in chains for more than 28 kilometres from Munyonyo, south of Kampala City, through Ntinda to Namugongo where they were finally killed under the command of the chief executioner, Mukajanga.

Chained Tiptoeing, others crawling with chains fastened around their necks, the young converts were whipped through the bushes. The torture marks on their bodies did not yield empathy in the hearts of their tormentors. The harrowing statutes of how the executioners impelled swords through the stomach of some of the martyrs, pouring out the intestines. Some of the effigies portray amputated limbs and heads crushed with hummers before they were set ablaze.

When Ssekabaka Mwanga felt threatened by the invasion of the Christian religion, he had ordered for the killing of all converts, including his own right hand men. The spate had started by the killing of Joseph Mukasa Balikudembe on November 15, 1885, after killing Noah Sserwanga, Mark Kakumba and Joseph Rugalama, among other white missionaries.At age 16, Denis Ssebugwawo, who is believed to be the first Uganda martyr, was beheaded on the orders of Mwanga at Munyonyo where the chief executioner, Mukajjanga, had set his office.

At the shrine in Namugongo, the martyrs had been tied with reeds around their bodies after being tortured. A fire was set on them, burning to ashes.According to the tour guide at the Anglican shrine museum, Ms Esther Makumbi, the experience amazed the executioners as the martyrs instead broke into song.“The martyrs’ skin felt the pain and the body burnt but not their souls. They remained strong and happy as they sang their way to death. But this made those who burnt them believe even more,” she says, explaining to the tourists some of whom wept to the vivid pictures.

Among the Catholic Martyrs was St Jean Marie Muzeeyi, for instance, who was beheaded and later his body thrown and dumped in a swamp at Mengo.  St Noa Mawaggali was speared and savaged by dogs, St Mbaaga Tuzinde was clubbed to death before being burnt at Namugongo while St Matthias Kalemba Mulumba was dismembered and left to die. Then, there was St Charles Lwanga who displayed incredible faith and great leadership skills. For this, he was punished, first, by getting separated from his Christian colleagues and later being burnt in a slow fire from foot to head at Namugongo.Of the 22 Catholic Martyrs, 13 were burnt to death at Namugongo.Fr Nicholas Mulumba, the assistant director of social communications department at Kampala Archdiocese, said pain is pain and it does not matter how the different pilgrims were killed.

The effigies depicting the executioners of the martyrs at Namugongo.

Christian historians at the martyr’s shrines reminisce that the executioners came to believe that the faith of the young men was really strong. Mr Enock Rukundo, the administrator of the Anglican shrine museum, says these harrowing tales of the last hours of the martyrs have since become monumental sites for tourists who come to pay homage at a fee. “We make sure that this heritage is kept and the pain that these martyrs went through should be kept alive. Believers come here to worship through these saints,” Mr Rukundo says. More about Muslim martyrsAlthough their exact number is not known, historians say many Muslims were persecuted for what they believed in, as early as 1857 when Kabaka Mutesa I ascended the throne after the death of his father, Kabaka Suna. By the time of Suna’s death, Islam which they say had started taking root in Buganda.Like his father Suna, Mutesa was fascinated by Islam and took great pride in studying the Quran and its teachings. Although the king did not impose the new religion on his subjects, it is said that he once in a while fancy the king.

Written history indicates that at that time, many people started learning the new religion and that he even ordered a mosque to be built at his palace in Kasubi, then known as Nabulagala.Dr Muhammad Kiggundu, the director of communications, research and international relations at the office of the Supreme Mufti, said Muslim martyrs were executed first before their Catholic and Anglican counterparts by Kabaka Mutesa I.

“The Muslim community does not prominently celebrate them as Islam discourages pilgrimage to places of martyrdom except the annual pilgrimage made by them to the holy city of Mecca,” Dr Kiggundu said.The Muslim martyrs, Dr Kigggundu said, were executed for different reasons, including turning down Kabaka Mutesa I offers after they believed he was not circumcised, a requirement for Muslims.  Also, they rejected other food stuffs, including meat from him, with claims that it had been slaughtered by non-Muslims. MARTYRS and their denominations     Anglican martyrs1. Rugarama Yusuf2. Kakumba Makko3. Sserwanga Nuwa4. Mukasa Musa5. Mbwa Eriya6. Muddu-aguma7. Muwanga, Daudi8. Kayizzi Kibuuka9. Mayanja, Kitoogo10.  Muwanga, Njigija11.  Muwanga12.  Kadoko, Alexanda13.  Kifamunnyanja14.  Kiwanuka, Giyaza15.  Kizza Frederick16.  Kwabafu17.  Lwakisiga, Mukasa18.  Lwanga19.  Mubi-Azaalwa20.  Munyagabyangu Robert21.  Nakabandwa Danieri22.  Wasswa23.  Walukagga Nuwa