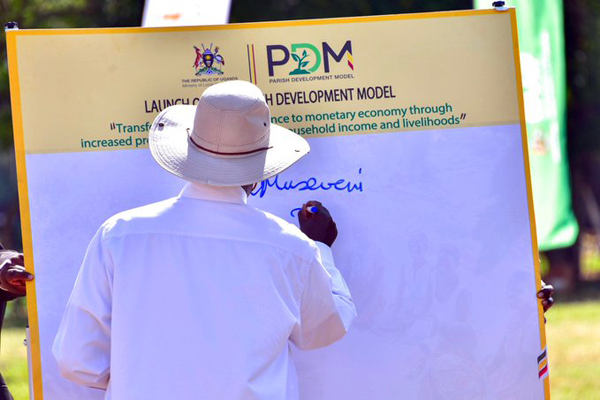 Ugandans who have been keenly waiting for the Parish Development Model (PDM) cash will have to wait a little longer after the statistics authority asked the government to halt the planned release of funds until data for beneficiaries is collected.

Addressing journalists yesterday at their head offices in Kampala, the Uganda Bureau of Statistics (Ubos) boss, Dr Chris Mukiza, warned that the data that has been collected by the local leaders is invalid and reiterated that the country is not prepared for PDM roll-out.

“We shall not advise the government to release the money now because we have not completed the collection of data across the country….. Until we get the right data, the government cannot release this money,” Dr Mukiza said.

President Museveni launched the PDM in February as a vehicle to lift millions of Ugandans out of poverty. The model targets 17 million people from 10,694 parishes across the country.

There are 3.5 million households that are currently trapped in subsistence farming. Under the government plan, each parish is expected to receive Shs100m this financial year.

The Ubos boss explained that since all the households cannot benefit from PDM, the statistics body has to come in to ensure the most vulnerable Ugandans benefit from the model.

“Ugandans should be patient with us…. wait for credible data so that the right people receive the money,” Dr Mukiza said, adding that “Politicians are saying the government should release the money but as data experts, we should wait until the right beneficiaries have been identified…”

The Ubos board chairperson, Dr Albert Byamugisha, told journalists that the government released unspecified cash to the Districts for data collection but the money was diverted to a different venture.

Monitor understands that some municipalities and cities did not receive money for data collection under the PDM arrangement.

“We have asked those municipalities that did not receive money for data collection to write to the government to have this money released on time,” Dr Byamugisha said.

Dr Mukiza said Kampala and Wakiso have so far collected only one percent data due to funding deficiencies.

“If the government releases the required money for data collection, this exercise can be completed by August and people will receive the money,” he said.

Under the plan, the Shs100m is sent directly to the Sacco accounts in each parish, from which households can borrow and invest in income-generating activities. Each household is entitled to Shs1m.

“This is a big puzzle but there is nothing we can do as government…. We have to make sure we release the money to the right people if we are to achieve the objective of PDM,” he said, adding: “The money is supposed to get people from substance farming to the monetary economy. If we do not get it right, then we shall make losses.”

When asked about the money for data collection, Mr Lugolobi said since some districts spent the money on other ventures, the government has to get more money and make those districts account for the previous funds.