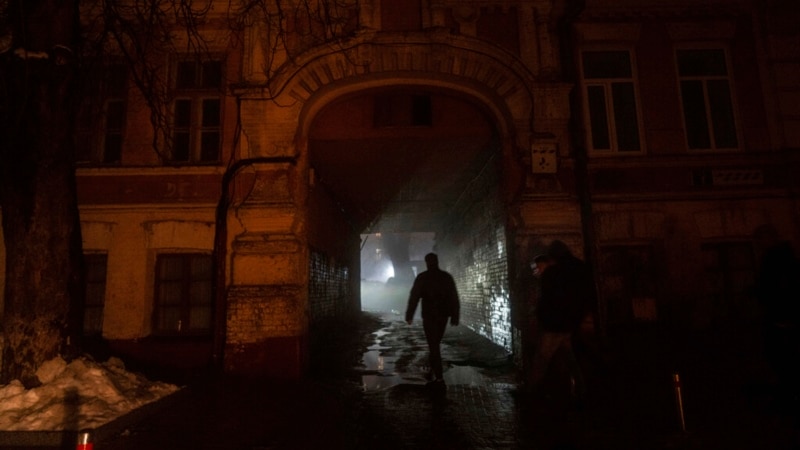 Ukraine worked throughout Thursday to try to restore power and water services to millions of its residents, with Russia’s attacks on the country’s infrastructure taking a toll.
A barrage of missiles struck major cities, including Kyiv and Lviv, on Wednesday; authorities said one of the airstrikes in Kyiv killed at least 10 people. By Thursday night, Kyiv Mayor Vitali Klitschko said 60% of homes in the city were suffering power outages. He said on Telegram that power engineers were “doing their best” to restore electricity.
City officials told Agence France-Presse that water services had been fully restored.
However, Ukraine President Volodymyr Zelenskyy said Thursday in his nightly video address, “As of this evening, there are still problems with water in 15 regions.

A resident injured after a Russian attack stands next to an ambulance before being taken to a hospital in Kherson, southern Ukraine, Nov. 24, 2022.

“The most difficult situation is in the Kyiv, Kirovohrad, Dnipropetrovsk, Lviv, Poltava and Kharkiv regions. But together with the supply of electricity to critical infrastructure, we also provide water and heat supply.”
“The situation with electricity remains difficult in almost all regions. But still, we are moving away from the blackout little by little,” he added.
The weather across much of Ukraine on Thursday hovered in the single digits Celsius, with rain and snow in the forecast for the coming days.
Nine months ago Thursday, Russian President Vladimir Putin ordered a “special military operation” aimed at the “demilitarization and denazification” of Ukraine, a former Soviet republic but an independent nation since 1991. The United States and Western allies have condemned the invasion and provided substantial military and other aid to Kyiv.
Last month, Moscow began targeting Ukraine’s electric grid in an apparent effort to hamper Ukraine’s ability to fight and force Kyiv to the negotiating table. Kyiv said the attacks are clearly intended to harm civilians, making them a war crime.

A boy holds a handmade Christmas tree as he waits outside a building that was shelled during a Russian attack in Kherson, southern Ukraine, Nov. 24, 2022.

“The way they fight and target civil infrastructure, it can cause nothing but fury,” Oleksiy Yakovlenko, chief administrator at a hospital in the eastern Ukraine city of Kramatorsk, told AFP.
Kremlin spokesman Dmitry Peskov told Reuters it was Kyiv’s fault Ukrainians were suffering because it refused to yield to Moscow’s demands, which he did not spell out. Ukraine said it would stop fighting only when all Russian forces had left.
The Russian airstrikes have pushed Ukraine’s energy system to the brink of collapse.

A grayscale satellite image indicating the night radiance of Europe from space, Nov. 23, 2022, is seen in this handout obtained by Reuters on Nov. 24, 2022. Ukraine, at the right side of the photo, has less light activity, caused by Russia’s attacks on Ukraine.

Viewed from space, Ukraine has become a dark patch on the globe at night, satellite images released by NASA show, Reuters reported.
Officials, mindful of the hardships Ukrainians are enduring, are opening thousands of “points of invincibility” — heated and powered spaces offering hot meals, electricity and internet connections. More than 3,700 were open across the country as of Thursday morning, Kyrylo Tymoshenko, a senior official in the presidential office, told The Associated Press.
Late Wednesday, Zelenskyy appeared by video before the U.N. Security Council and said Russian missiles had hit hospitals, schools, transportation targets and residential areas that day. Zelenskyy said Ukraine was awaiting a “very firm reaction” from the world.

Russian U.N. Ambassador Vasily Nebenzya rejected what he called “reckless threats and ultimatums” by Ukraine and its Western supporters.
Meanwhile, Fatih Birol, executive director of the International Energy Agency, said Europe should be able to cope with a natural gas supply crunch in the coming months thanks to considerable reserves.
However, there could be bigger issues for the continent next winter, he warned during a speech at an energy symposium in Berlin, hosted by the German government.
Barring unforeseen events, “Europe will go through this winter with some economic and social headaches, bruises here and there,” as a result of efforts to wean itself off Russian gas, Birol said, according to the AP.
“Next winter will be more difficult than this winter,” he added.
Birol said that Russian gas supplies to Europe might end completely next year, while China’s demand for liquefied natural gas looks set to rebound as its economy recovers from the pandemic.
Also, he said the IEA projected new gas capacity coming online in 2023 to be the lowest in two decades, according to the AP report.
“[This] is the reason Europe needs to prepare today for next year,” Birol said, adding that solidarity among European nations, which have offered broad support to Ukraine, is key.

FILE – A woman cries and crosses herself after identifying the body of a missing neighbor, killed on the grounds of an industrial facility used by Russian forces in Bucha, Ukraine, April 4, 2022.

Also Thursday, Matthew Holliday, program director for Europe for the Hague-based International Commission on Missing Persons (ICMP), said more than 15,000 people had gone missing during the war in Ukraine.
The ICMP opened an office in Kyiv in July to help Ukraine document and track down missing people. Holliday said it was unclear how many people had been forcibly transferred, were being held in detention in Russia, were alive and separated from their family members, or had died and been buried in makeshift graves.
Some information for this report came from The Associated Press, Agence France-Presse and Reuters.