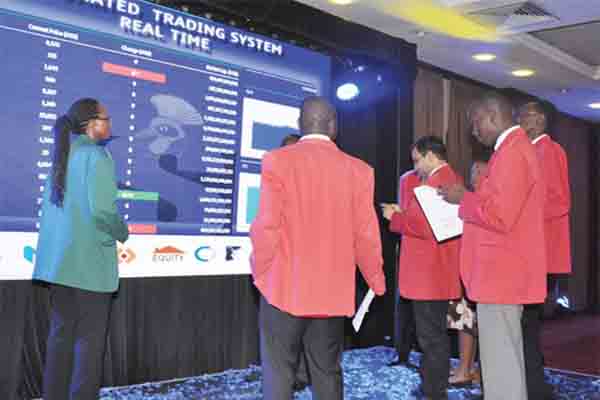 Umeme and MTN dominated trading in the 2022 third quarter, accounting for more than 60 percent of activity at the Uganda Securities Exchange (USE).

During the period, according to data from USE, equity market activity increased with total turnover growing by Shs2b.

The growth, which saw turnover increase to Shs9.2b compared to Shs7.2b in the same period last year, indicates a steady pick up in the market activities despite difficult economic conditions.

Other active counters included Bank of Baroda, Stanbic Bank, Uganda Clays, and Centum, among others.

However, on a quarter-to-quarter basis data indicates that turnover for the third quarter was lower than the Shs13.4b posted in the 2022 second quarter.

Mr Andrew Mwima, the USE manager trading and research, said in terms of quarterly turnover performance per counter, USE turnover was realised on 10 counters, among which included Umeme, Bank of Baroda, Stanbic Bank, Uganda Clays, and Centum, among others.

Umeme posted the largest turnover valued at Shss2.8b, which accounted for 30.67 percent of the Shs9.2b.

Umeme was followed by MTN with a percentage turnover of 30.04 percent while Bank of Baroda and Stanbic Bank contributed 29.78 percent and 7.83 percent, respectively.

Uganda Clays and Centum accounted for 1.03 percent, and 0.34 percent respectively while the rest of the counters, among which included NIC, Cipla, Dfcu and New Vision had a combined turnover of Shs27.2m.

Mr Mwima said this trend was due to changes in different market prices of cross listed companies, many of which were held back by anxiety due to the Kenyan election, which also affected the exchange rate.

The current total value of government bonds listed on the bourse stands at Shs25.6 trillion while the corporate bond market recorded no activity.