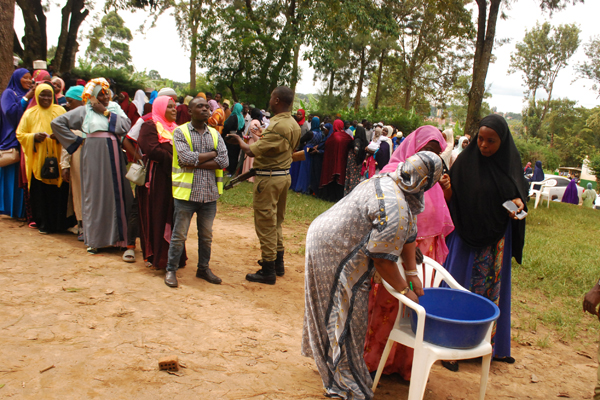 The Uganda Muslim Supreme Council (UMSC) nationwide polls, which kicked off last Friday, have eventually come to an end with the election of representatives to the general assembly.

The General Assembly is the top decision-making organ of the UMSC.

According to Mr Omar Muhammad Wesswa, the chairperson UMSC Electoral Commission, the special groups Electoral College for women and youths will elect their representatives to the assembly on Saturday, November 26, 2022.

“We really thank the Muslims who turned up in big numbers to participate in the elections since they commenced at the Mosque level on November 18, 2022.  So, the turn up is 90 per cent,” Mr Wesswa said while addressing journalists at UMSC headquarters at Old Kampala on Wednesday.

He, however, noted that the elections didn’t take place in some areas due to interference by some area Muslim leaders.

He cited Biina Muslim County in Nakawa Division, Kampala City where the County Sheikh stopped Muslims from voting on unfounded grounds, and Soroti City where there are disputes on the boundary of the city.

Mr Wesswa also cited some of the challenges they have encountered such as insufficient civic education resulting from tight deadlines, late arrivals of electoral materials at designated polling centres, and the delayed upload of the Result Declaration Forms (DR) on the portal due to limited skills by some of their staff.

He thanked the government and the UMSC Management Committee for the support rendered towards the election process.

However, a section of Muslims opposed the Mufti Sheikh Shaban Mubajje administration boycotted the elections, describing the whole process as a sham.

Mr Wesswa also announced changes in the date for swearing in new members of the General Assembly from December 9, 2022, to December 2 – 4, 2022.

UMSC last organised grassroots elections in 2012 and for the Mufti in 2000. These elections had earlier been scheduled to take place between March and May this year, but UMSC failed to raise some Shs6.9b for the exercise.

In May, Parliament approved Shs2.5b to facilitate UMSC electoral activities. After completing the ongoing elections, Muslims will now shift focus to the election of a new mufti when the tenure of incumbent Sheikh Shaban Mubajje expires in 2025.

Sheikh Mubajje, who assumed office in December 2000, has on several occasions said he wanted to serve as Mufti for a short time after ushering in a new constitution, but the continuous court and internal Muslim leadership wrangles have forced him to stay longer in office.

Currently, the country’s Muslims have two top parallel administrations – one headed by Mufti Mubajje at the UMSC headquarters at Old Kampala, and another based at Kibuli hill headed by Sheikh Muhammad Galabuzi.