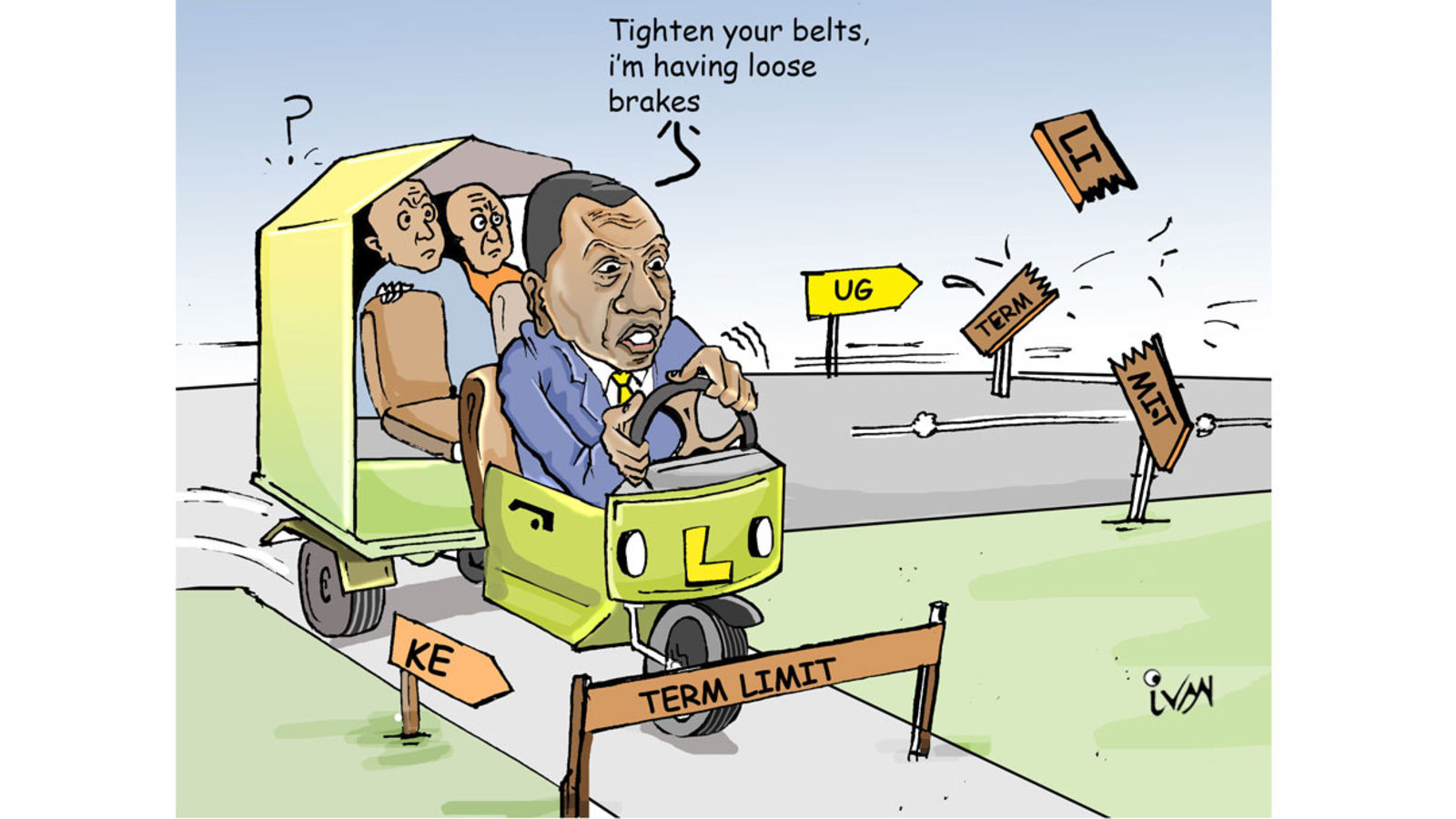 The biggest news in East Africa these past few days has been that suited gymnasts in Kenya are moving to scrap presidential term limits to allow a 55-year-old man, in office for just two weeks, to rule until he is senile.

Whenever someone talks about East African Community (EAC) spirit, just know it’s not mere language but the ghostly thing. It’s the pride of EAC that Kenya is finally under the spell. However, even the spirits are very afraid given the speed with which these guys are racing ahead of themselves.

I know Wakenya speak more Lingala than Luganda but Afrigo’s Speed Controlle is a nice song to give a proper ear to. In just weeks, these guys have smelt the coffee wafting with bloody aroma from the jungles of the Congo. Now they have gone in there to fight the M23.

By Christmas, Charlene will probably be sworn in as a top public official. The First Daughter has been doing a lot that mama mboga na boba boda could not even have imagined. Big shots in the country are bowing to her charms as she runs around on official duties unofficially.

This is a first. If you asked even the seasoned revolutionaries, they will tell you that their daughters are only there to pose for photos and spend time in church preparing the scriptures that their papa can throw about during speeches. But now Charlene is flipping everything on its head. Nyinyi Wakenya, go slow. Do you need a reminder that yours is not even a revolution to begin with? Even in the vote proper, your hustler just won with 50 percent plus one.

Imagine such a joke. To belong to the club, you either hit 99 per cent of the vote or get some solid 60 percent, the latter to appease the donors that the election was free and fair. You get just 50 and now you are trying to perch on a Boeing to show that you are possessed by the EAC spirit. No, that can only be changa’a messing up your head.

Let’s get this clear. We’ve been known for Idi Amin for decades. You go to Haiti or the Philippines or anywhere and mention Uganda and someone will say, “Oh, the land of Amin.” But what can they say of Kenya? Forget Obama. It’s time you guys got known for your own version of Amin otherwise you cannot treat us to a climax before you have developed the plot.

If you start sprinting fwaa, what happens if we told you that in Uganda women are gifting men Range Rovers on their birthday? For starters, you have Wetangula or someone like that up there in your National Assembly, can he understand things like a woman gifting her hubby with a Range Rover when he has only known socks and key holders as birthday gift from women?

I mean, that is your level, Kenyans. It’s only proper that you leave things of Generals to Generals. Just a reminder that a son of one of the revolutionaries in the region last week completed his cadet course and will be a General in coming months, while in some other state, the wife of the president is a Major General.

Where an Indian grooms his children to run their businesses, revolutionaries groom theirs to run the state because that is their empire.

Yet all you have over there is Charlene who can’t even send tweets that can cause regional tremors. Yes, she has grown up in satiated opulence but I still believe she would confuse a buffalo in Masai Mara for our famous long-horned cow.

In case you need a reminder, Kenyans, the cow is the symbol of things in the region. Until we see Ruto posing around with his herd of cows with Itumbi directing the photographer to capture the longhorns in HD, we shall assume that your suited gymnasts are high on changa’a.