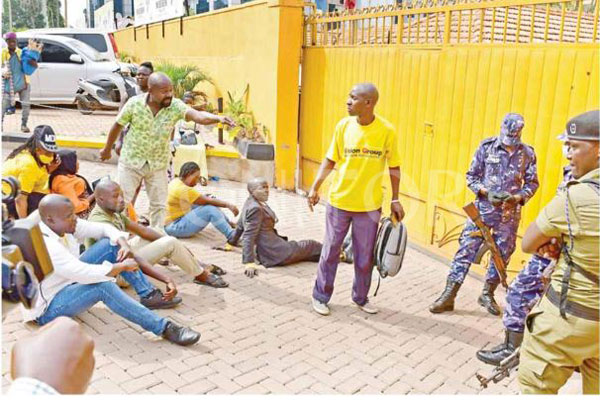 Chaos rocked the ruling party headquarters in Kampala yesterday as more than 200 flagbearers, who lost in the 2021 General Election in Kampala Divisions, stormed the offices, demanding refunds and accusing their leaders of neglect. Sources at Plot 10, Kyadondo Road said the ugly scenes forced party leaders at the National Resistance Movement (NRM) Secretariat to flee their offices. The flagbearers, who had gone to meet the party general secretary, Mr Richard Todwong, and other officials, became rowdy when they were told that the officials they were there to meet were not around.

They began banging the yellow gate and shouting at the top of their voices, calling their leaders names and accusing them of being indifferent.   The group vowed not to leave the party headquarters until they met the officials they had gone to see and some sat in front of the gate, forcing party officials to call the police. When the police arrived, a few members of the group were allowed inside the premises while the rest stayed outside and hurled insults at their leaders for forgetting their plight.

He added: “The party chairperson promised to support all leaders of the party from the five divisions of Kampala. He first instructed his PPS (principal permanent secretary) to handle but she did not work on our issues. Then he later handed us to the secretary general, but he has also disappeared.” In 2021, President Museveni had a closed-door meeting with the flagbearers at Kololo in Kampala and promised to address their grievances.  “We are discriminated against for supporting President Museveni and NRM party but our leaders don’t care. They don’t want to know what we are going through. We lost all our property during 2021 elections due to the chaos involved but those who see us think we have money but in actual sense we are very poor and suffering.”

Mr Lukwago and his colleagues threatened to quit the party and either join the National Unity Platform (NUP) or the Forum for Democratic Change (FDC) should the party officials continue to “play games” with his team.  Mr Muhsin Ssemakula from Namungoona said: “I sold off my house during 2021 elections to stand as NRM flagbearer in my constituency…. I sacrificed everything for this party but now I have gained nothing. My people think I have money but I don’t have. We are just here neglected yet they promised us heaven and earth.”  Mr Robert Otebe, the NRM flagbearer Lukuli Makindye, vowed to stay at the party head office until he gets an official communication from the chairperson of the party or Mr Todwong.

“We have committed no offence to be here, we are at our home. I am not going to leave the place until Mr Museveni addresses all the issues as he promised us. These people are telling us to meet him (secretary general) on Wednesday but I can’t leave without an official communication,” Mr Otebe  said. Ms Prossy Nassolo, a flagbearers from Busega, said: “We have been patient enough. We are tired of taking us for granted as if we are stupid people. If they feel like they are tired of us, they should come out and declare it so that we can figure out the way forward.”