What next for Kadaga? – Daily Monitor

What next for Kadaga? – Daily Monitor 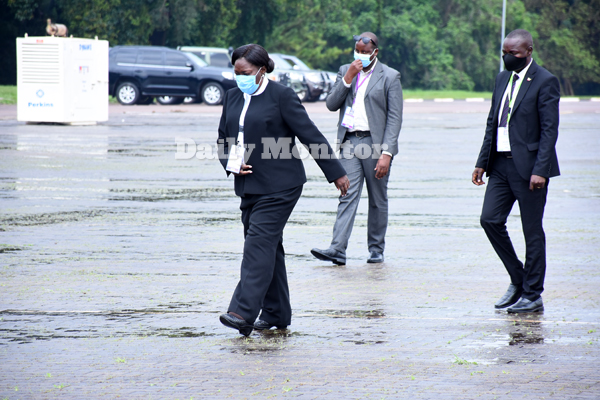 The outgoing Speaker of Parliament, Ms Rebecca Kadaga, yesterday lost her spirited battle to retain the position of Speaker in the 11th Parliament to her political rival, Omoro County MP Jacob Oulanyah.Mr Oulanyah, 56, had been Deputy Speaker for a decade when Kadaga, who made 65 yesterday, was in-charge.However, the last of the past five years witnessed a public fall-out between the duo, with Mr Oulanyah, whom Ms Kadaga accused of insubordination and unauthorised disappearances through foreign travels, excluded from chairing the 10th Parliament.
The fight also split staff and Members of Parliament amid intrigue and factionalised fighting for influence.The feud returned to shape a rancorous campaign between the two as they sought to get the flag of the ruling National Resistance Movement (NRM) party to run for speakership.After brutal and sometimes ugly spats, the ruling party’s Central Executive Committee (CEC) on May 23 chose Mr Oulanyah as its flag bearer, prompting Ms Kadaga, who had derided CEC as “undemocratic”, to run for Speaker as an Independent.
She garnered 197 votes compared to winner Oulanyah, who polled 310 votes, both dwarfing Forum for Democratic Change’s Ibrahim Ssemujju who got 16 votes.The results of yesterday’s election proved one thing – Kadaga will no longer head the 11 Parliament – but opened a new question: what next for her.One possibility is that she will serve as a Backbencher MP, which would be her first in two decades, in line with the mandate that voters of Kamuli gave her as the District Woman MP.With that climbdown, Ms Kadaga loses trappings of the third most important office in the country, its power and wide influence that she commanded to earn respect and rally alliances.
In the run-up to the Speaker campaigns, she publicly spurned what she said was proposal by unnamed individuals to be offered, and accept, an appointment as Uganda’s next Vice President.If that were to happen, Ms Kadaga would be replacing Mr Edward Ssekandi, the same way she succeeded him as Speaker. This would sketch a familiar political career which ends in being an understudy, a position that the Kamuli Woman MP said is powerless unlike the Legislature where she was in-charge.
With the Speaker elections over, President Museveni is expected to name a new Cabinet, which he has been carefully putting together for months, anytime this or early next month to kick life into a government running on auto-pilot.

Insiders say the President’s criteria for evaluating potential appointees include religious suitability, historical contribution to the armed struggle of the National Resistance Army (NRA), regional balance, experience and reward for votes he got in the 2021 vote.For the first time since he started subjecting himself to elections in 1996, Mr Museveni this year lost Buganda and Busoga, the backyard of Ms Kadaga, to the Opposition National Unity Platform party led by Robert Kyagulanyi, alias Bobi Wine.
The electoral loss takes some shine off Ms Kadaga’s political appeal unless President Museveni judges his loss there to have been his own making or selects to appease Busoga and appoint one of the region’s most illustrious daughters to influential Executive position in the next government. Ms Kadaga said she was disfavoured by NRM because of her outspokenness and one problematic proclamation she made while slighting CEC was that aspirants for Speakership were not their “cattle” to be exclusively selected by members of the party’s top organ.President Museveni chairs CEC and is a proud cattle keeper, an occupation he has repeatedly said he will retire to, if he ever will, and it was unclear whether the outgoing Speaker targeted him in her off-the-cuff chide.And running rough against Mr Museveni can be political risky, as the attempt by Amama Mbabazi, his long-time confidant and premier, to take the presidential seat proved.
Tamed and more compliant, Mr Mbabazi is making a return to the fold, with criticism of the President or his government a thing of the past.Many other leaders who have fallen out with Mr Museveni have been kept in the cold for years until well-wishers broker an understanding during which they apologise and return more vulnerable than before they left government.Can Ms Kadaga suffer a similar fate? The answer depends on how she plays her political cards, having lost a bitterly fought speakership race in which President Museveni appeared in person to witness the ballot.
Mr Oulanyah’s victory is Mr Museveni victory too, especially that he was identified, vetted as fit-for-purpose by CEC which the party’s national chairman chairs.

Former Speaker Rebecca Kadaga congratulates her political rival, Omoro County MP Jacob Oulanyah upon being elected Speaker of the 11th Parliament at Kololo Ceremonial Grounds in Kampala on May 24, 2021.

Whereas the women ticket could play in favour of Ms Kadaga, the appointing authority looking favourably over her immediately after a divisive poll may be unlikely, especially that Ms Kadaga’s political rivals in the women fold would then look up to State House for rewards.
That complicates Mr Museveni’s calculations as they do to Ms Kadaga’s. A continued open confrontation with the Executive would be counter-productive for Ms Kadaga, considering the litany of complaints President Museveni raised against her during the CEC meetings last weekend.Captain Mike Mukula, the NRM vice chairperson for eastern Uganda, yesterday said the party would not sit back and see disagreements tear it apart.
“We will reach out to our sister Rt Hon Kadaga to de-escalate and resolve our matters amicably. We will bend backwards and forward to embrace all our people with a view of building a collective effort to build our country together. The party is our supreme body and will remain so,” he said.If that succeeds, and Ms Kadaga humbles herself, her fortunes within NRM could surprisingly rebound and blossom.If she remains recalcitrant, the full force of the state could be ranged against her in a manner of vengeance as other influential leaders who have disagreed with Mr Museveni have experienced.
Thus, NRM’s is now an uneasy house. How they treat Ms Kadaga post-Speakership may ignite an issue particularly with the women constituency, both locally and internationally. Yet, President Museveni would be unwilling to allow a fall-out with the Kamuli Woman MP overshadow his government’s long commitment to women emancipation.To retired Ambassador Harold Acemah, a political scientist and consultant, Kadaga’s more honourable way out after disagreeing with her own party is to resign from Parliament and concentrate on her law firm because she cannot be a backbencher after enjoying power for 20 years.
“Kadaga played her cards very badly. She has been a beneficiary of NRM for 20 years. NRM supported her for Deputy Speaker twice and as a Speaker also twice. Twenty years is more than enough for God’s sake. She should not have contested,” he said.Herself an accomplished lawyer and women rights campaigner, Ms Kadaga could snap up an international job, considering her illustrious profile, and escape the political heat and risks at home.
Or, if unwilling to bend, she could serve her current term and cross to join an existing or found new political party to challenge President Museveni in 2026, should the latter be available to contest for a seventh elective term.FDC’s Patrick Amuriat, who came a distant third in the January polls, yesterday seized on the possibility of the Kamuli Woman MP changing political home, to invite her to join the party which has lost its parliamentary majority in the 11th Parliament to NUP, a novice party.A crack within the ruling party is welcome news to the Opposition, whether or  not the fissures materially aid Opposition or disorganise NRM.
Mr Henry Muguzi, an expert on Democratic Governance and Accountability in Africa, said Kadaga break-away to run solo of her party undermines multiparty democracy under which members are expected to abide by the rules and decision of party.“In democracy, if you lose, you have to rally behind the one (flag bearer that) the party has selected. If she was a democrat, she should have accepted defeat and then rally behind Oulanyah,” he said, suggesting that NRM punish Kadaga to prevent future obstinacy.
Mr Mukula, referencing majoritarian rule in multiparty democracy, said every party member should subordinate interests to that of the political party, which is supreme.“The party is bigger than an individual … when you go against a party decision, you undermine the party and principles of multi-partism. Yet, you cannot eat your cake and have it,” he said, rather cryptically.
In a way, Ms Kadaga’s career is now an open book, and its authorship will predicate on what she does or does not do in coming weeks, months and years. Thus, her future is in her hands, and hopefully not in her past.And there is no shortage of examples of how the state and NRM government has treated political foes including Dr Kizza Besigye, and lately Bobi Wine, the most tortured political opponents under Mr Museveni’s administration.
Their tribulation could radiate to Ms Kadaga the fate that awaits her when she crosses  to their world. It’s a world evidence has shown to be ruthless, but significant to refine the skills, talents and experiences to challenge the President’s grip on power more boldly. Like the wax-winged Greek fairy Icarus, son of Daedalus, it appears Ms Kadaga orbited too close to the sun and was burnt. The sexagenarian will have to choose between loyalty and rewards or obduracy and punishment as her ticket to the future.