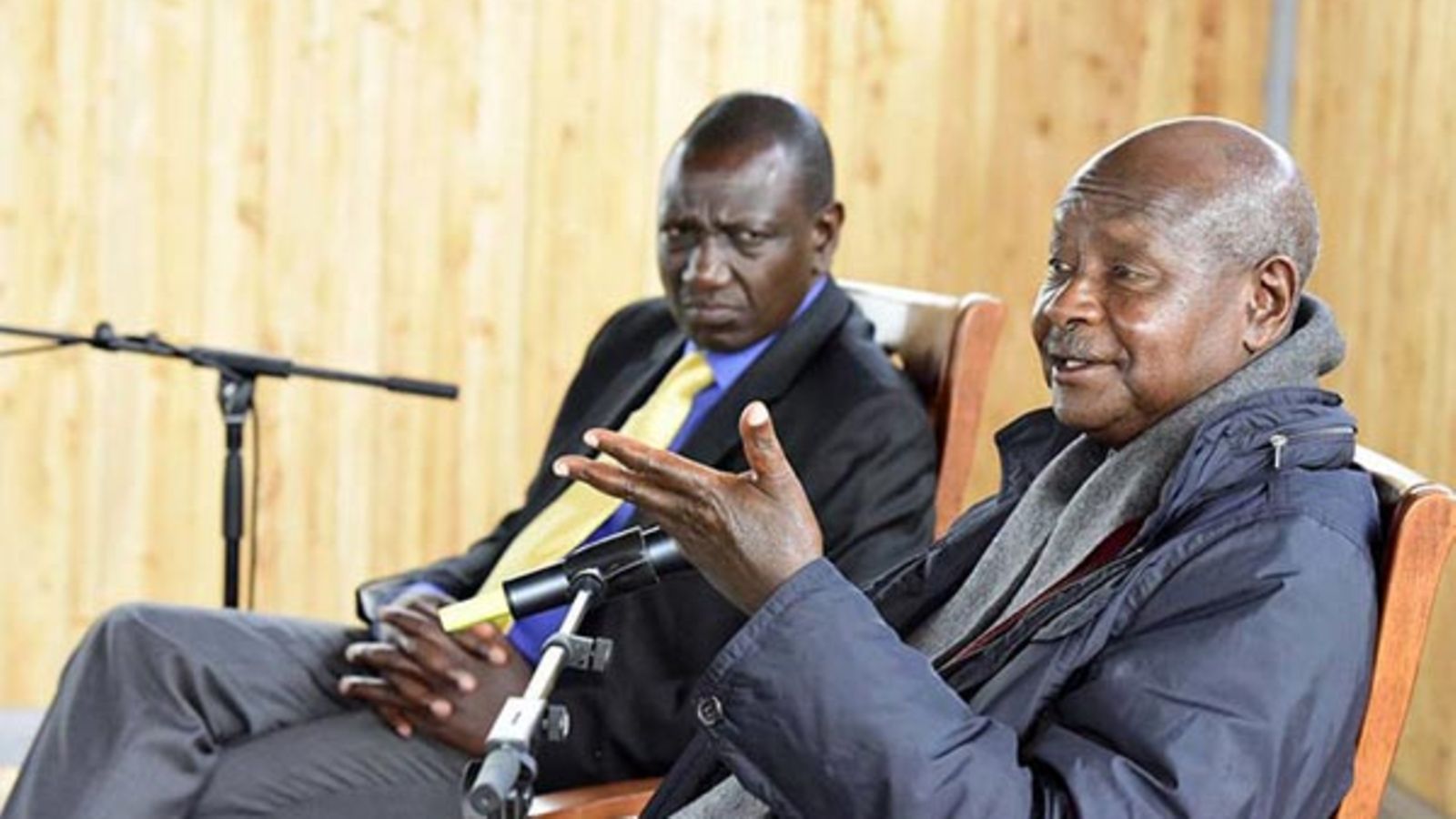 When Raila Amolo Odinga – who for the fifth time failed to clinch the Kenyan presidency – was on the presidential trail in August, he made a statement that left the ruling National Resistance Movement (NRM) in Kampala and its supporters livid.

From the video that trended on social media, Odinga seems to have been incensed by the idea that Kenya – whose Gross Domestic Product (GDP) is worth $110.35b, making it the biggest economy in East African – was being compared with countries in the region that have been ravaged by war.

Riddled with civil warWithout mentioning names, the former prime minister said some people within Kenya’s body politic had time and again asked Kenya to look up to countries that were ravaged by civil wars.

“Look at Somalia, look at Ethiopia, look at South Sudan, look at Uganda,” he said. “Kenyans don’t want to be compared with the worst of the worst in the world. We should be compared with success stories.”Odinga was echoing how the global north has always gauged Kenya in a region that is riddled with conflict after conflict.

“But there are less romantic reasons for Kenya’s disproportionately high profile. The most advanced economy in the region, thanks in part to the network of roads, cities, railroads, and ports left by the British, Kenya has held linchpin status ever since independence by mere dint of what it is not,” British author and journalist Michela Wrong writes in her book It’s Our Turn to Eat.

“It has never been Uganda, where Idi Amin and Milton Obote demonstrated how brutal post-colonial rule could turn; or Rwanda, mourning a genocide that left nearly a million dead; or Sudan, venue for one of the continent’s longest civil wars,” she continues. “In place of Ethiopia’s feeding stations and Somalia’s feuding warlords, it offered safari parks and five-star coastal hotels. Kenya’s dysfunctional neighbours have always made it look good in comparison.”

Though Odinga’s message, according to NRM officials interviewed for this story, wasn’t taken well in Kampala, it only reinforced its support for William Ruto who was declared winner of the elections by the Kenyan Supreme court on Monday.“Ruto has been courted by [President] Museveni for some time. That’s why you saw people attached or linked to NRM support him,” a lawyer who is privy to NRM’s strategies said. “And also, Raila is seen as an ally of [former FDC president Kizza] Besigye.”

Ever since Ruto was elected Kenya’s Deputy President in 2013, he forged a relationship with Museveni to the extent that in 2015 he joined the Ugandan President, who was on the campaign trail in the north east district of Kapchorwa, triggering wrath and remonstrations from Ugandan Opposition.

In the past six years, Ruto has visited Uganda five times, including on July 6, 2021, when he joined Museveni in the unveiling of a vaccine manufacturing facility built by Dei Group, a Ugandan company associated with tycoon Matthias Magoola, found in Matugga, Wakiso District.

The following day in the company of Frank Tumwebaze, the minister of Agriculture, Animal Industry and Fisheries, Ruto visited Nshaara Government Ranch found in Museveni’s home district of Kiruhura.

Ruto was slated to return to Kampala in August of 2021 but in the sign of a strained relationship with his boss President Uhuru Kenyatta, he was theatrically stopped from boarding a private jet destined for Entebbe International Airport on grounds that he had not sought clearance as all civil servants should, triggering protests.

“We are surprised the deputy president was denied clearance to go on a planned private visit to Uganda. It is our officers who always handle his travel and this time, they were told that he must get clearance from immigration to fly out. In all his travels, all these years, this has not happened,” Ruto’s office responded.

When on August 16 Kenya’s Independent Electoral and Boundaries Commission (IEBC) announced Ruto winner, having garnered 50.5 percent, narrowly edging out his former ally Odinga who got 48.9 percent, President Museveni, though the result was still in dispute, was among the first African leaders to congratulate Ruto saying.

“On behalf of all Ugandans, I congratulate Your Excellency William Ruto upon your election as the fifth president of the Republic of Kenya,” he said.

Hot airWhen Kenya’s Supreme Court dismissed Odinga’s petition on grounds that evidence that was supporting it was nothing but “hot air” and “forgeries”, Museveni was quick to applaud his ally.

“I rang HE Williams Ruto to congratulate him on the Supreme Court’s unanimous decision to uphold his election as the fifth president of Kenya,” Museveni tweeted, adding that he is looking forward to working with him to strengthen their strategic partnership in advancing the East African Community (EAC) agenda.

Though Uhuru has been the most extroverted president in the EAC, his relationship with Kampala hasn’t been rosy, with Kenya in the last two years curbing the exports of poultry and dairy products from Uganda, damaging the relationship between two of the three founder members of the community that’s struggling to integrate economically, let alone politically.

Nairobi wasn’t done. In 2020, it upped the tempo when it blocked Ugandan sugar and sugarcanes, costing traders who were exporting raw cane to Kenyan sugar mills billions of shillings as the raw material was left to rot on trucks at the border.

In 2021, in retribution, Kampala had instructed the ministry of Agriculture to come up with a list of Kenyan products that will be banned “in a short time”.

“We have been too patient. In the past, we have not reciprocated, but now we are going to. This has gone on for too long and within a short time they too will understand what we are going through,” said Rebecca Kadaga, the minister of East African Affairs. But Kampala didn’t follow through with its threats after Kenya, where 85 percent of Uganda’s products pass through its port of Mombasa, paused the ban.

But a trade war isn’t always far away and in June it seemed the two countries were destined for a fight after Uhuru’s government reinstated a levy on eggs imported from its western neighbour. “The implementation of levies on Ugandan eggs by Kenya is a bad policy and in violation of the East African Community policy of free movement of goods and services originating from the member states,” Godfrey Oundo Ogwabe, the chairperson of the Uganda National Cross-Border Trade, told Monitor in June.

MisconceptionThe calculation in Kampala is that with Ruto outwitting Odinga, who was Uhuru’s heir apparent, the trade wars could be history, but some believe this is a big misconception. “What confuses me is that on the ideological landscape. I thought Raila was more progressive than Ruto and NRM claims to be progressive. So how come they are closer to non-progressive instead of the progressive,” says Mr Mwambustya Ndebesa, a senior lecturer of history at Makerere University.

Ruto has been catapulted to the presidency under the auspices of an alliance of parties – Ruto’s United Democratic Alliance (UDA), Musalia Mudavadi’s Amani National Congress (ANC), and Moses Wetangula’s Forum for Restoration of Democracy Kenya (Ford Kenya) – called Kenya Kwanza (Kenya first) and this has been likened to former American president Donald Trump’s catchphrase of America first in which he referred to a policy stance in the US that generally emphasises nationalism and non-interventionism.If Ruto implements Kenya Kwanza’s manifesto to the letter, it would have massive ramifications for Uganda’s agricultural sector.

Kenya is Uganda’s biggest trade partner, with Kenyan exports to Uganda in 2020 amounting to $673.66m while Uganda’s exports to Kenya such as sugar and confectionaries, coffee, honey, dairy products, eggs and cereals stood at $465.55m during the same period.

In the manifesto, Ruto laments that Kenya’s food imports, which automatically includes those from Uganda, have increased from 10 to 17 percent of goods imported over the last decade which, in actual terms, he insists translates to a 2.5-fold increase from $1.2b to $3b.

In turn, Ruto says, this has increased the country’s vulnerability to global food supply shocks such as the one the country is experiencing.

“The saying goes that when in a hole, one should stop digging. Kenya Kwanza is very alive to this counsel. The economic turbulence that we are in demands more than a manifesto that makes a catalogue of pledges that, if implemented, could push the country beyond the tipping point. It requires a credible economic turnaround plan, a plan that gives Kenyans realistic hope,” the manifesto reads.

As per the records of the United Nations Comtrade database on international trade, Uganda’s exports of maize to Kenya in 2020 was worth $49.07m but in 2021 the Kenyan government announced a ban on maize imports from Uganda citing high levels of aflatoxin.

In 2022, following the surge of maize flour prices, Kenya made a U-turn, with then agriculture cabinet secretary Peter Munya eating a humble pie in asking Uganda, Tanzania and Zambia to pledge Kenya a share of maize exports to wad off deficits. “We are now talking to these countries to have them set aside some stocks of maize to be purchased by our traders to boost supply locally,” Munya said, adding that crop failure due to poor weather and a shift in the movement of Uganda’s maize to South Sudan had seen flour prices in Kenya increase to Shs6,707 (Ksh210) for a 2kg packet, up from Shs3,832.8 (Ksh120) at the start of the year.

In his manifesto, Ruto recognises that maize flour which in Kiswahili is known as unga has hit an unprecedented Ksh230.

Ruto’s alliance says the role of agriculture to the cost of living need not be belaboured since food accounts for 54 percent of household expenditures, but the poor spend 60 percent or more. Ruto’s solution is not to look for imports from the East African Community, but rather from within Kenya.

It provides a number of solutions, including providing adequate affordable working capital to farmers through well-managed farmer organisations; deploy modern agricultural risk management instruments that ensure farming is profitable and income is predictable such as was provided for in the Guaranteed Minimum Returns (GMR) scheme in the 1970s.

“Transform two million poor farmers from a food deficit to surplus producers through input finance and intensive agricultural extension support, with a target to generate a minimum productivity target of Ksh50,000 revenue an acre,” the manifesto says.   “Raise the productivity of key-value food chains and other value chains (maize 8-15 bags an acre, dairy 2.5kg- 7.5kg a cow a day, beef carcass weight from 110kg-150kg).”

Though Ruto doesn’t explicitly says his government will tax imports from East African countries, experts insist his agenda is onward looking rather than outward, something that could trigger more trade wars within the region.