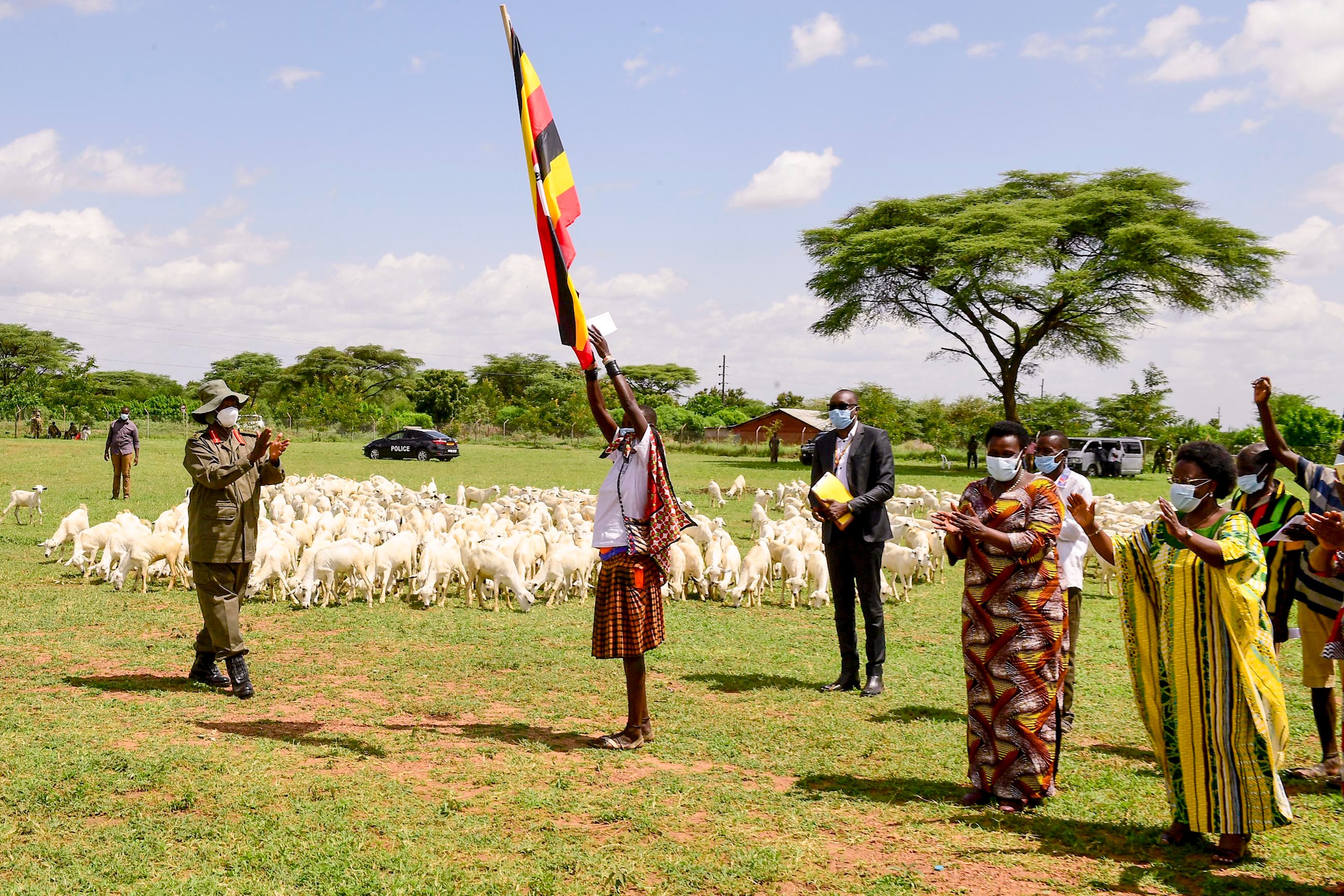 President Museveni believes the current efforts to end commercialised cattle rustling in Karamoja and the surrounding areas will not only restore peace and sanity but also credibility of the state which a section of leaders in the restive Sub-region seem not to be seeing.

While meeting security personnel from the mineral-rich north eastern region at Morulinga state lodge in Napak District, Gen Museveni who is also the commander in Chief of the UPDF was shocked to learn from the 3rd Division Commander, Big General Joseph Balikuddembe, that some political and clan leaders in Karamoja are engaged in the business of selling of guns to facilitate cattle rustling and blocking justice to prevail hence hindering efforts by government to pacify the region.

people. A gun trafficker in our custody who has been supplying guns to the warriors’ network in Kotido revealed criminal links with some of these political leaders,” Brig Gen Balikudembe told the President. According to him, the campaign is spreading across the entire Sub-region as has so far resulted into the killing of two Gombolola (Sub County) Internal Security Officers (GISOs) in Napak and Kotido respectively. Mr Museveni, however, said this should not intimidate security forces from doing their work of restoring credibility of the state.

“What you’re talking about is what happens when the state is no longer respected. That’s when alternative groups like elders, witch doctors become an authority because they are not sure whether this government can defend you. This is not surprising at all. We should do our work so that the authority of the state is respected,” Mr Museveni said before blaming MPs for allegedly acting negatively and being opportunistic with no clear vision of what they want to be and their people.

“For example, as government advocates for children’s education, the elders on the other hand influence the staying home of children to look after cattle,” Brig Gen Balikuddembe said.

According to Gen Balikuddembe, they are also concerned about the suspicious movement of some leaders of Kotido District to Nakitongo in Turkana Kenya, since the launch of simultaneous Usalama Kwa Wote operations across the sub region on May 6, 2022.

“They have travelled three times to Kenya. Intelligence information shows that these leaders are in advanced stages of convincing Turkana to renew the broken alliance and have peace with them in order to pave the way for fugitive warriors to get where to hide from the on-going disarmament operations,” Gen Balikuddembe said.

In Karamoja, a gun is exchanged at a rate of three to five cows or one to two bags of sorghum or purchased with a minimum of Shs3 million.

“This is the main reason why there’s a continuous recycling of gun violence in Karamoja,” Balikuddembe told the president but was quick to add that from the 500 profiled suspected criminals, a total of 317 guns with 2,807 rounds of ammunition have been recovered. A total of 22,541 livestock was recovered out of 40,000 reportedly stolen since the launch of operation Usalama Kwa wote.

President Museveni commended security forces for their concept of simultaneous operations, targeting the armed rustlers with guns, those with bow and arrows, the informers, those with sticks chasing animals and any other suspects. He promised to continue supporting them.

“From what I have heard. I will do my part on facilitation. Even in the past they were against disarmament but we have got live examples of other regions bordering South Sudan, DR Congo where there’s no gun violence and are peaceful,” Mr Museveni said.

The meeting was also attended and addressed by the Vice President Maj Gen (Rtd) Jessica Alupo Epel and the Deputy Chief of Defense Forces Lt Gen Peter Elwelu. Others in attendance were senior UPDF officers, Resident District Commissioners from the districts of Karamoja and Police Commanders.

Today, the president will address Political leaders who include Members of Parliament and district leaders, religious leaders, clan leaders and opinion leaders from the Karamoja region to devise means of bringing to an end the re-insurgence of cattle rustling in the region and the surrounding areas.

DisarmamentGovernment carried out the disarmament in Karamoja between 2001 and 2010. More than 40,000 illegal arms were recovered from locals, bringing to an end the armed cattle raids until last year.