A Pass considers standing for Lord Mayor in 2026 – UGNEWS24

Gov’t Should Cater for All Children’s Medical Bills – LOP

There are millions of business ideas that can make you money. Just pick one 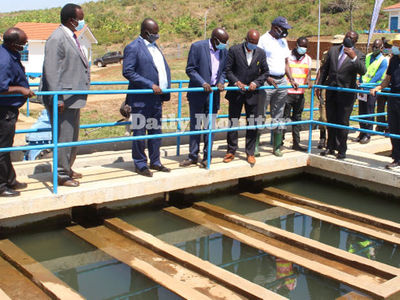 Residents living in the districts of Kapchorwa, Bulambuli and Bukedea have been connected to clean water.This follows the commissioning of Shs72 billion gravity water flow scheme, which was constructed by the government through the Ministry of Water and Environment, with support from African Development Bank (ADB).During the commissioning ceremony at Sirinda Village, Kapsinda Sub-county in Kapchorwa District over the weekend, Mr Sam Cheptoris, the Minister of Water and Environment, said  the beneficiaries,  who mostly live in the lowlands, have been having challenges to access safe and clean water.“For long, the government has been having challenges in supplying clean water to the lowlands but with the establishment of this facility, the situation has been handled and communities will now live better lives,”  Mr Cheptoris said.The scheme supplies water to various sub-counties including Kapsida and Kawowo in Kapchorwa District and Bukiyi in Sironko District.Others include Kachumbala, Kidogole, Malera and Kamutur in Bukedea District and Bunambutye and Bukhalu in Bulambuli District. Advertisement

The minister said most of the available water sources in the beneficiary communities had broken down.“Most of the boreholes and other water sources were broken down some years ago leaving communities to suffer,” he said, adding that the government will continue establishing gravity schemes in order to ensure that every village has access to safe and clean water.“As a ministry, we are encouraging the construction of such schemes because they carry bulky volumes of water that can serve a big population for a long period  of time,” Mr Cheptoris said.Mr Joseph Eyatu, the director of water for development in the Water ministry, said the project will serve 400,000 people in 11 sub-counties across the four beneficiary districts.  Currently, the project has 1,248 connections both in people’s homes and the public.  “Our population projection is 400,000 people in the four districts, however, the facility has the capacity to serve beyond as it produces 12 million litres of water per day,” Mr Eyatu said.  He said the gravity flow system is less expensive and serves a broader population compared to the boreholes that the beneficiary community have always been relying on.Mr Stephen Manga, the chairperson of Sirinda Village in Kapsinda Sub-county, applauded the government for the project but said as the host community, they are not yet connected.“The government promised that as the host community, we will be among the first beneficiaries but we have not received the piped water,” he said.The chairperson of Bukedea District, Mr Moses Olemukan, said: “My people have received the water project with great joy because they have been sharing their water sources with animals.” Another shs4.9 Billion projectThe government also commissioned another gravity flow scheme in Bulambuli District, which was built at Shs4.9 billion with support from the European Union and the Federal Republic of Germany.The scheme serves 23,000 people in six sub-counties of Kamu, Bulegeni, Sisiyi, Muyembe Town Council, Bulegeni Town Council and Namisuni Sub-county.editorial@ug.nationmedia.com

By Betty Ndagire Court has remanded businessman, Rugiirwa Katatumba, for failing to pay over Shs120m he secured from Prime Finance Company.Mr Katatumba, the son to the deceased former Consular of the Pakistan Islamic Republic in...

By AFP The African Union has secured an additional 400 million doses of coronavirus vaccines for its members, the Africa Centres for Disease Control and Prevention (Africa CDC) said Thursday.This comes on top of an...

By Betty Ndagire Court has sentenced the Vice Chairman of Kasubi Zone IV, a Kampala suburb, to four years in prison over taking part in the murder of a suspected phone thief who was lynched...

By Anthony Wesaka By Juliet Kigongo Mengo Chief Magistrates’ Court has dismissed with costs the request to have a recount of votes in Kampala Central constituency on grounds that the evidence adduced by the petitioner,...

By Wilson Kutamba Ruling National Resistance Movement (NRM) party has won both female and male youth positions in Masaka City, the first major win the party has recorded in the area since general elections started...

A Pass considers standing for Lord Mayor in 2026 – UGNEWS24

Gov’t Should Cater for All Children’s Medical Bills – LOP