Museveni behaves like Jesus a week before he was crucified – UGNEWS24

I play PS4 and monopoly in my free time

WHAT NEXT? Kyagulanyi to address the country tonight after Museveni was declared 2021 polls winner – PML Daily

Sonko Forces His Way Past Guards & Into Raila’s Office 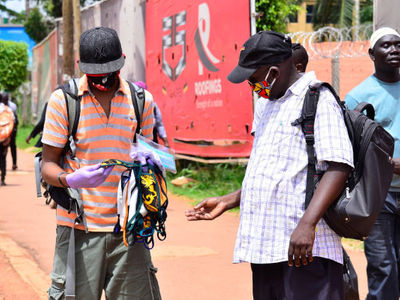 When President Museveni started to ease the nationwide lockdown in May, he believed that the facemasks, which were to be distributed within two weeks, would play a vital role in curbing the spread of the virus.Re-opening of major sectors of the economy, including public transport, depended on this.By then (mid May), less than 300 people had been infected by the virus. A total of 33 million masks were to be distributed to all Ugandans above six years of age, each at a unit cost of Shs2,400, starting June 4.  A total of Shs81 billion was approved to facilitate the process.Data by the Uganda Bureau of Statistics (UBOS) indicates the country’s the total population as of June this year stood at 41.6 million.Seven months later with 34,677 cases and 251 deaths by  yesterday, about six million Ugandans are yet to receive the protective gear.Uganda is currently at stage four of the pandemic, with widespread community retransmissions.Statistics from the Ministry of Health as of December 22, show that 27.3 million masks have been distributed in 98 districts across the country. This is represents 72.6 per cent district coverage and 82.8 per cent quantity coverage.Districts that have not received the facemasks include Mbale, Iganga, Apac, Mitooma, Napak, Nwoya, Agago, Bunyangabu, Bugweri, Kapelebyong,Kwania, Pallisa, Bugiri, Nakasongola, Mayuge, Sironko, Butambala, Kyankwanzi, Gomba, Bulambuli, Alebtong, Otuke, Lamwo, Nabilatuk, Kalaki, Karenga, Kazo, Kitagwenda, Terego, Amudat, Lyantonde, Bududa, Kaliro, Kaabong, Ibanda, Butaleja, Amuria,  and Amolatar.Wakiso, with the second highest number of cases registered, has received 2,336,750, the highest number of masks, followed by Kampala which received 2,040,179 masks.Data from the Uganda Bureau of statistics estimates the population of the two districts at 2,915,200 and 1,680,600 respectively. Dr Jimmy Opigo, the head of the malaria control programme at the Ministry of Health, who is also heading the mask distribution project, told this newspaper that an additional 2.5 million masks have been distributed to students across 131 districts.According to the ministry, the deficit and delay in distribution is due to a delay in releasing funds for the implementation. Advertisement

In  July, a month after the commencement of distribution, Dr Charles Olaro, the director of curative services at the ministry, told this newspaper that the Ministry of  Finance had only committed Shs33 billion. He said if availed the funds, it would take a month to cover all the districts.Going by the numbers, the government owes suppliers about Shs34.5 billion.Health ministry spokesperson Emmanuel Ainebyona said despite the delays, the process is still ongoing until all districts are covered.Mr Ronald Mubiru, the public relations officer at Southern Range Nyanza (Nytil), one of the companies contracted to supply masks, told Daily Monitor that the government stopped making orders for masks two months ago. He, however, says they have been paid for all the masks they have supplied.A report by the Budget Monitoring and Accountability Unit released last month shows that as of August 2020, 16 contractors had signed to supply a total of 21,425,000 masks at a cost of Shs57,534,422,400.  ekamurungi@ug.nationmedia.com