Police Swallows Bitter Pill, Agrees To Respect Court Order To Vacate Kyagulanyi’s Residence But Vows To Keep A watchful Eye On Him

AFCON U20 Draw: Uganda Hippos Placed in Group A

If Mr. Good heart was a person – Zuena to Bebe Cool as they celebrate 19th marriage anniversary

“You will end up like Obote” Musaala hits back at Museveni

I was coached, forced to lie about Kyagulanyi in NUP case- Kibalama

Don Zella is just a friend, I kissed her out of excitement- Tamale Mirundi Junior 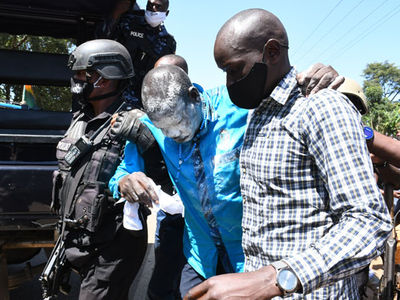 The Forum for Democratic Change (FDC) presidential candidate Patrick Oboi Amuriat was hospitalised yesterday after he was pepper-sprayed by police while on a campaign trail in Bugiri District. He was admitted to Fast Line Medical Centre in Bugiri Town. Mr Amuriat yesterday exited Bugiri Town heading to Busia for the next campaign meeting. But shortly outside Bugiri Town, he found a security roadblock and his convoy was stopped. At the checkpoint, Mr Amuriat was asked to drive back through Bugiri, Iganga to Mbale where police had also deployed. He rejected the directive and instead asked police to escort him through Tororo to Mbale, which suggestion police also rejected.Police started making frantic telephone calls probably for further instructions. There followed more deployment of patrol vehicles to block the road. Crowds started forming and police attempted to chase people away but they kept increasing in number. A brief protest by taxi and long distance truck drivers against the blockade ensued.  Police eventually allowed small cars to pass. Long queues of trucks formed and lasted about two hours.“We are drivers and we are supposed to go to work, but now they have blocked us. What do they expect us to do here? We are from Busia, we are transporting passengers and goods. We don’t know why we are being blocked,” one taxi driver complained at the checkpoint.The Field Force Unit commander for Bukedi Sub-region, Mr Abraham Asimwe, arrived at the checkpoint and headed straight to Mr Amuriat’s car.  His arrest appeared imminent. But the head of Mr Amuriat’s official security team told Mr Asimwe that he would not be allowed to arrest the FDC presidential candidate. Mr Asimwe then pulled out a gadget from his pocket and pepper-sprayed Mr Amuriat whose car window had been lowered. Mr Amuriat remained motionless inside his vehicle as the substance affected him. He could not sustain an interview with NTV Uganda. He collapsed inside his car.  Efforts to evacuate to him hospital were blocked by police. His team offered him first aid to mitigate the impact of the pepper-spray.  Advertisement

Mr Asimwe then ordered police vehicles to surround Mr Amuriat’s car.  He rejected pleas to have Mr Amuriat evacuated.Mr Waswa Biriggwa, the FDC national chairperson and Amuriat’s campaign manager, said Mr Asimwe’s conduct clearly shows the level of state-inspired violence against the Opposition.“We were supposed to go to Tororo, they blocked us. This man called Asimwe has pepper-sprayed Amuriat in the eyes and he needs urgent medical attention. The same Asimwe is refusing us to take him to hospital and here we are. If anything happens to our president, Asimwe will personally be held responsible,”  Mr Biriggwa said.“This government continues to deceive people that it is organising elections yet they continue to block and torture the opponents. This must stop,” Mr Biriggwa added.After about an hour, Mr Amuriat’s condition worsened and Mr Asimwe allowed him to be taken to hospital. Mr Amuriat who could no longer sit on his own was bundled into the police patrol car. He’s personal aide and official security team moved with him inside the police vehicle, abandoning their own car.  He was driven to a health centre in Bugiri Town where he was put on intravenous treatment (drip) and other medication.Mr Amuriat was scheduled to campaign in Tororo and Mbale districts, but the Electoral Commission (EC) on Saturday banned campaigns in the two districts, a day after the same EC released the revised campaign timetable.On Sunday, he had also been arrested by police while on his way to Tororo. He was driven back and dumped at Ssezibwa Bridge in Kayunga. Across eastern region, police have deployed at all the district boundaries, to block Mr Amuriat from moving to different districts.Earlier on Sunday, while attending prayers at Kamuli Catholic Parish, Mr Amuriat said he had now committed his campaign programme to God. He said the situation in Uganda is akin to the King Herod era when he heard of the birth of Jesus Christ and ordered killing of all newly born sons.King Herod was the king of Judea, who ruled the territory with Roman approval, and who the Bible depicts as a ruler who tried to kill baby Jesus but when he couldn’t find him, he killed every infant in Bethlehem.“The regime is in a panic mode and every day I wake up to prepare for the campaign trail, I talk to God and say: “ My God of grace and mercy, take care of your servant as he goes on this trail to redeem your marginalised people and build a new Uganda,” Mr Amuriat told the congregants in church.In his sermon, the Kamuli Catholic Parish Priest, the Rev Fr Richard Okao, called for peaceful elections and said those involved in electoral process should emulate Jesus. The FDC eastern Uganda vice chairperson, Ms Proscovia Salaamuu Musumba, condemned what she called ‘a state unlevelled campaign ground’.“It takes Ugandans back to the dark days of President Idi Amin, which Mr Museveni purports to have come in with a fundamental change to cure but he has drifted back to the same or even worse times and scenes.The cost and radicalisation of democracy makes the National Resistance Movement’s slogan of ‘securing the future’ a mockery and an illusion,” Ms Musumba added.EC ISSUEMr Amuriat mid this month told the EC that he would not show up at their offices to explain alleged violation of campaign guidelines after being summoned.Mr Amuriat also said the Commission would be making a grave mistake if they disqualify him from the presidential race. “If we took one day off the campaigns, that means we will not have time to come back to the areas we have not gone to. So the EC has to choose time to meet us and if they want to meet me in person, then it has to be on December 25,” he said. He is yet to meet the EC.By Franklin Draku, Philip Wafula & Sam Caleb Opio editrial@ug.nationmedia.com

By Fred Wambede The ruling National Resistance Movement  (NRM) in Sironko District is back to the drawing board after losing all the top slots in the just concluded parliamentary and Local Council elections to the...

By Derick Kissa Elections have been halted at two polling stations and two presiding officers arrested in Lugazi Municipality in Buikwe district after they found pre-ticked ballot papers in boxes, in favour of the ruling...

By Job Bwire Police said Monday that they will honor a court ruling ordering security forces to vacate former presidential candidate, Robert Kyagulanyi’s home where they have confined him since January 14, 2021.A High Court...

By Xinhua A year into the COVID-19 pandemic, the United States is still fighting a brutal battle against the virus as its total number of infections topped 25 million on Sunday.U.S COVID-19 cases rose to 25.1...

Two Ugandans arrested in India with drugs worth Shs2billion

By Andrew Bagala Two Ugandan nationals have been arrested and 9.8kg of heroin worth Shs2 billions seized at an Indian airport.The two Ugandans were arrested at Indira Gandhi International (IGI) airport on Sunday, according to www.tribuneindia.com.According to...

By Xinhua The United Nations Food and Agriculture Organization (FAO) on Sunday warned swarms of desert locusts are expected to descend on large parts of Ethiopia and Kenya in the coming weeks.In its latest situation...

Police Swallows Bitter Pill, Agrees To Respect Court Order To Vacate Kyagulanyi’s Residence But Vows To Keep A watchful Eye On Him