My music will influence people to vote for me – Jose Chameleone

4 killed in Masaka for Protesting against Museveni’s victory

Why Museveni lost Busoga to Kyagulanyi 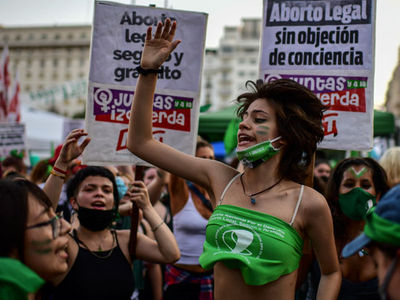 Argentina’s Senate is preparing to vote Wednesday on a landmark bill on whether to legalize abortion in a country where the Catholic Church has long held sway, with the vote expected to be razor-thin.Approval would put Argentina among only a small group of Latin American nations that have taken similar action. The highly-anticipated session was opened Tuesday by Senate president Cristina Kirchner, who is also Argentina’s vice-president.Kirchner, a former two-term president, said there were 67 of the 72 senators present when the session opened at 4:00 pm (1900 GMT) either in person or by video link.Some 58 people are registered to speak, and the vote is not expected until late into the night.”Today is a day of hope, we’re going to start debating a project that will avoid more unjust deaths,” said Norma Durango, a senator with the ruling coalition. Advertisement

The bill was proposed by President Alberto Fernandez and passed the Chamber of Deputies on December 11, despite fierce opposition from the Catholic Church and evangelical Christians.”I’m Catholic but I have to legislate for everyone. Every year around 38,000 women are taken to hospital due to (clandestine) abortions and since the restoration of democracy (in 1983) more than 3,000 have died of this,” said Fernandez.The government says there are between 370,000 and 520,000 illegal abortions a year in Argentina, a country of 44 million.A similar bill two years ago also passed the lower house but then floundered in the Senate by 38 votes to 31.This bill aims to legalize voluntary abortions at up to 14 weeks. Terminations are currently only allowed in two cases: rape and danger to the mother’s life.- ‘Born in the streets’ -Despite measures to prevent the spread of the coronavirus pandemic, thousands of both pro- and anti-abortion supporters demonstrated in front of parliament, following the debate on giant screens.”Today we’re very nervous, we’re really confident it will become law but if that doesn’t happen we’ll remain in the streets because this battle started in the streets and it will continue in the streets,” said Silvia Saravia, a pro-choice demonstrator.Pro-choice activists have campaigned for years to change the abortion laws that date from 1921, adopting a green scarf as their symbol.Anti-abortion activists have recently started wearing light blue scarves.”I know that in the heart of every senator there is love for their children, their grandchildren, and above all a hope that children give us, the joy that children give us and I’m sure they will win with this,” said Karina Muzaquio, an anti-abortion protester.Outside Congress, anti-abortion demonstrators raised crucifixes, prayed and set up displays that simulated tombs, around a giant graphic image of a baby stained with blood.Across the plaza, pro-choice protesters held signs that read, “Motherhood will be desired or it will not be,” and “We will never go underground again.”Pope Francis, who is Argentine, wrote a message on Twitter that, while not explicitly mentioning the vote, was interpreted by many as encouraging the senators to vote against the bill.”The son of God was born discarded to tell us that every person discarded is a child of God. He came into the world as a child does, weak and fragile, so that we can embrace our weaknesses with tenderness,” wrote Francis.The vote is expected to be razor-thin, despite the governing alliance led by Fernandez making up 41 of the 72 Senate seats.Not everyone in that alliance supports the bill, while the right-wing neo-liberal opposition is mostly opposed.”The interruption of a pregnancy is a tragedy. It abruptly ends another developing life,” said Ines Blas, another senator from the ruling coalition.However, Senator Silvina Garcia Larraburu, again from the ruling coalition, said she would vote for the bill this time despite voting against it in 2018.Another key vote from the ruling coalition, Senator Sergio Leavy, said he was backing the legalisation. “This law does not force abortion. It does not promote abortion. It only gives a legal and safe framework…If my vote helps to save a woman from losing her life, I vote in favor of this law.”Should the vote result in a tie, the deciding lot would fall to Kirchner, who two years ago changed her stance from anti-abortion to pro-choice.- ‘Extremely sensitive issue’ -Such changes have always been slow in Argentina: divorce was legalized only in 1987, sex education introduced in 2006, gay marriage approved in 2010 and a gender identity law passed in 2012.The Catholic Church is fighting this issue all the way. On Saturday, Archbishop Oscar Ojea prayed to the Virgin Mary at the Lujan Basilica in Buenos Aires for help in preventing the law from passing.”Blessed Virgin, pause your gaze on our legislators who must decide on an extremely sensitive issue, so that they may reflect with their minds and hearts,” said Ojea at the mass.In Latin America, abortion is only legal in Cuba, Uruguay and Guyana, as well as Mexico City.In El Salvador, Honduras and Nicaragua, it is totally banned, and women can be sentenced to jail even for having a miscarriage.

Why Museveni lost Busoga to Kyagulanyi

By Monitor Team The January 14 presidential elections produced some of the biggest surprises for President Museveni and his ruling National Resistance Movement (NRM) party in the last 25 years. For the first time since his...

By Nobert Atukunda A few hours after President Museveni was declared winner of the 2021 presidential election, the 76-year-old outlined key issues that he intends to tackle in the next five years in office.One of...

I will go to court, says Bobi Wine

By Derrick Wandera The National Unity Platform (NUP) presidential candidate, Mr Robert Kyagulanyi, alias Bobi Wine, has said he will challenge President Museveni’s election in court and that he is compiling evidence to support his...

Go to court if you contest poll results, says Kaziimba

By Ephraim Kasozi Church of Uganda Archbishop Dr Stephen Kaziimba has asked election losers who contest the results to seek remedies in court. “Let us keep peace and any disagreement with the results, go to court...

My life is in danger, says defeated Fungaro

By Felix Warom Okello  The incumbent Member of Parliament for Obongi, Mr Fungaro Kaps Hassan, has said his life is in danger, three days after losing the parliamentary elections.Mr Fungaro was arrested on the eve...