Soldiers who manned Ugandan polls were imported from Angola – #ugnews24

Students Stranded As School Dormitory Is Burnt Down

Ruto: I Will Not Allow Raila’s People to Fight Uhuru

Ksh200 Million Up for Grabs in New Mozzart Bet Jackpot 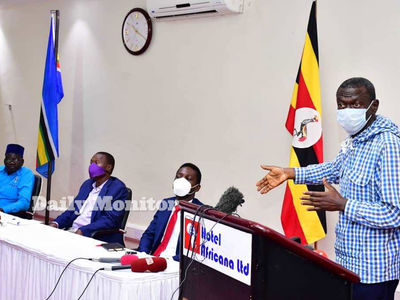 Former Forum for Democratic Change (FDC) president, Dr Kizza Besigye has lauded opposition presidential candidates for bracing brutality meted out on them by armed forces as they canvassed the country for votes ahead of Thursday polls.The four-time presidential contender Tuesday said the terror that has been meted out on the candidates for the last 60 days of vote hunt “is frankly unprecedented.”“I want to congratulate these brave gentlemen that have over the last 60 days tried their level best to reach out to Ugandans ahead of this election. The campaign period was incredibly short, candidates had 60 days to traverse 351 electoral constituencies. There are moments in these campaigns that I had never encountered in my campaigns. If Mr Museveni stays in office may be by the next election, presidential candidates will have to procure armored trucks and protective gear,” Mr Besigye said during an address at Hotel Africana in Kampala.

Mugisha MuntuAccording to him, the level of violence appears to “increase with every round of elections”.“Make no mistake, this was never about COVID-19. This regime doesn’t care about COVID-19, go to downtown and see what’s there, people are gathering uninterrupted,” Advertisement

“The more the support of the regime goes, the more they replace it with repression,” Dr Besigye added during the press briefing attended by three presidential candidates; Robert Kyagulanyi alias Bobi Wine of National Unity Platform (NUP), Gen Mugisha Muntu of Alliance for National Transformation (ANT) and Patrick Amuriat Oboi of FDC.

Robert Kyagulanyi alias Bobi WineMr Kyagukanyi in his remarks asked Ugandans to use this as a protest vote and oust Mr Museveni, 76.“Turn up in large numbers, vote, be assertive and guard your vote till it counts. To Mr Byabakama and the team, you know what a bad election can do to this country. If you mismanage this election, it will be upon you forever. The people of Uganda aren’t going to accept any illegality anymore,” Mr Kyagulanyi said.Mr Kyagulanyi said Mr Museveni wbo has been in power for the last 35 years prides himself in vote-rigging.“And we have to stop that. Be there and watch the process,” he added.Mr Amuriat also asked Ugandans to protect their vote before urging the Electoral Comission to ensure that the January 14 poll is free and fair.“I want to call upon Ugandans to come out on Thursday and turn a mere piece of paper into a change that some people think is impossible. Vote protection is equally important. I want to tell the EC that if they can’t organise a free and fair election, then they are a useless organization. It will be counter-productive for anybody especially Kaguta Museveni to think he will use the army against unarmed civilians who will just be exercising their constitutional right on Thursday. Fellow citizens, don’t just lie low as Mr Museveni and his apparatus take away your and our victory. Think about our country,” Mr Amuriat said.

Patrick AmuriatWhen politics goes wrong, everything else gets negatively affected, according to Gen Muntu.“We as forces of change recognize that the higher the number of voters, the higher the chances of having a peaceful change of power as a country. The regime is using violence to dampen the mood. We ask Ugandans to stand firm, this is our country and we have to shape it. The greedy individuals should know that. To the EC, don’t bow to pressure. Do the right thing and stand firm, the law will be on your side and Ugandans will be on your side too,” Gen Muntu said.Mr Museveni, whose increasingly violent reprisals against opposition candidates have drawn global condemnation, has accused outsiders and “homosexuals” of backing the neophyte opposition leader, Bobi Wine and is expected to win the January 14 vote that observers say will be neither free nor fair.

By Isaac Mufumba This result takes to six the number of wins Mr Museveni has registered in all elections that have been held in the last 41 years.Mr Museveni was always going to be the...

Iconic moments to remember in the 2021 presidential campaigns

By Jacobs Odongo Seaman Elvis Mbonye arrived at the grand stage called the 2021 presidential election with the solemnity of a soul. The invite for the men of God to go and pray for peace,...

By Elizabeth Kamurungi President Museveni has pledged to retire numerous times, among which was the promise to handover to a civilian government four years after the National Resistance Army took over power in 1986, then...

What next for Bobi Wine?

By Timothy Kalyegira The Electoral Commission yesterday declared NRM candidate Yoweri Museveni as the winner of the 2021 presidential election.In runner-up position was the NUP candidate and musician Robert Kyagulanyi, aka Bobi Wine.Once again, the...

By Isaac Mufumba Months before March 5, 2019, when Kyadondo East MP Robert Kyagulanyi, alias Bobi Wine, announced that he would stand for the presidency, two time-presidential candidate Abed Bwanika declared that he was the...