UN releases $100M in bid to prevent famine in 7 countries

NHIF to Only Cover Covid-19 Costs for Govt Workers

You’re on your own, DP hits back at Mbidde over Bobi Wine support 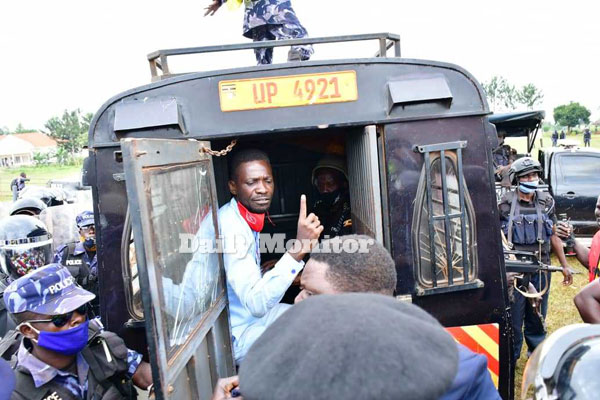 National Unity Platform (NUP) presidential candidate Robert Kyagulanyi popularly known as Bobi Wine has been arrested in Luuka District where he had been scheduled to address his supporters as he looks for votes ahead of 2021 general election.The Kyadondo East MP was arrested on Wednesday morning following a scuffle between his supporters and security operatives at his campaign venue.

Bobi Wine’s arrest comes after the Inspector General of Police, Martin Okoth Ochola warned presidential candidate against defying Electoral guidelines in a bid to prevent further spread of Covid-19.“Despite repeated warnings issued to candidates, their agents and wider public about the negative impact and health risks of holding unauthorized rallies and processions, we continue to witness acts of defiance and total disregard of the EC guidelines. Therefore, those who shall defy these Electoral Commission guidelines with their sinister plans aimed at disrupting the Electoral process will definitely suffer consequences,” Mr Ochola said in a statement issued on Wednesday morning.

NUP presidential candidate Bobi Wine pictured in a police van after his arrest in Luuka District. He’s currently detained at Nalufenya Police post in Jinja District. Police accused Bobi Wine of defying EC guidelines on Covid-19. PHOTO/ ABUBAKER LUBOWAAccording to the IGP, police and their sister security agencies have adopted a tougher approach to preserve the integrity of the electoral process.“We have dispatched our specialist teams and quick reaction teams, to identify ring leaders (and principals) for apprehension in the face of crime. We have disseminated our comprehensive policing plan to all territorial commanders for them to implement without fear or favor,” he added.Mr Kyagulanyi has in the past days been seen addressing crowds in disregard of Covid-19 SOPs as he seeks to unseat President Museveni who has ruled Uganda since 1986.NRM supporters have also been seen holding processions in towns and cities where the veteran president who is also the party presidential candidate has been holding his campaign meetings.

This photo taken on November 17, 2020 shows NRM supporters led by musician Moses Ssali alias Bebe Cool in a procession in Kitgum town where president Museveni held his campaign meeting with NRM flag bearers and leaders from Agago, Amuru,Gulu, Kitgum , Lamwo, Nwoya, Omoro, and PaderHowever, the IGP said the Electoral and Political Offences Department at CID headquarters, has obtained videos of the respective campaign trails, and started gathering evidence to press formal charges, on candidates, campaign agents and influencers who are caught on the wrong side of the law.

By David Awori Two police officers attached to Busia Central Police Station have been arrested and handed over to the Chieftaincy of Military Intelligence (CMI) headquarters in Kampala over the fatal shooting of a Uganda...

You’re on your own, DP hits back at Mbidde over Bobi Wine support

By Fred Wambede The founders of Bamasaba Cultural Institution, Inzu- Ya-Masaba, who constituted themselves into a Council of elders, have cleared Mr Jude Mike Mudoma, to be installed as new Umukukha.Mr Mudoma was cleared during...

Taiwan grounds all F16 jets after one goes missing

By AFP Taiwan has grounded all of its F16 fighter jets for safety checks as rescuers continue to search for one that went missing during a training exercise, authorities said Wednesday.The decision removes around 150...

By Patience Ahimbisibwe Opposition presidential candidates have complained to Electoral Commission (EC) about police brutality and being denied access to the mass media during the campaign trail. Six of the 11 candidates, who attended yesterday’s meeting...