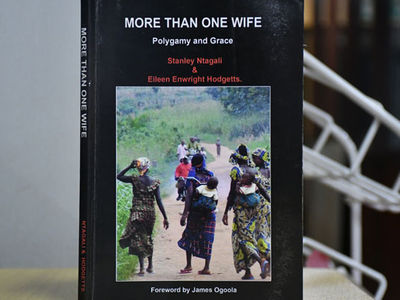 The emergence of news that Church of Uganda has suspended retired Archbishop Stanley Ntagali from pastoral duties over adultery allegations kicked up debate on social and mainstream media early this week.With the avalanche of banter and criticism emerged images of a book co-authored by the prelate and a British writer, Eileen Enwright Hodgetts. More than one wife; Polygamy and Grace, published in Kampala in 2011, weaves around a very sensitive topic in the Christian life yet subtly delivers the deep-rooted place of polygamy in the African setting – and ultimately in the Christian world. The book, which former Principal Judge Justice James Ogoola in his foreword describes as thought provoking, and which the previewer, DrMartin J. Aliker, says gives ample illustrations on the evils of polygamy, while at the same time poses questions on the place of polygamy from the Biblical view, is told in a simple yet logical language.Split in two parts staggered along 12 chapters, the 115-page book, which seeks “to give some information to the people to whom polygamy sounds strange”, starts off by describing polygamy in the African setting and placating it across the world.  It wears all costumes of cultural clash. First, Archbishop Ntagali reminisces the pain he went through as a product of polygamy. It included not being allowed into church and delayed baptism until he was 10 years old.  Some people who were considered polygamists were not confirmed and could not partake of the Holy Communion. The consequence of this was that for convenience, people were forced to marry one wife for the sake of the Church yet they secretly kept the extra women in their lives. Advertisement

Such, then, was the basis of Archbishop Ntagali’s piece of literature. The author(s) ask very cardinal questions. Why would the Church elbow out others yet the institution sought to bring all before the Lord and what was the purpose of matrimonial vows that would never be adhered to? In the West, there is a tendency of contractual marriage or several divorce cases. In the event of remarrying, how would that be different from the polygamist in Africa? “For both Westerners and Africans, polygamy is a subject that is very difficult to discuss. It is a cultural practice that challenges us to find ways for opinions to be heard and not to be dismissed as prejudiced ignorance, or, worse still, the imposition of colonial standards on a society that is, to some extent, functioning perfectly well within its own standards”, the books states on Page 2. With an estimated 30,000 people reported to be practising polygamy in the American West, the book alludes to several examples of famous world leaders, who are either pro-polygamy or were products of the practice, including former US president Barack Obama. In trying to understand the origins of Christianity and its place, the book avers that its arrival and packaging in the continent was in itself problematic. “Unfortunately, missionaries had their own weaknesses because they had the conviction that theirs was the only good message… The missionaries, basing their faith on Western customs, could find no merit in the African marriage customs. They insisted that in order to be Christian, the African must live as they lived, believe as they believed, and marry within the Western understanding of marriage.” Page 16-17 This caused conflict among the people, upon whom all the Western values were heaped on almost ‘immediately’ despite their norms that had kept them well all along. The authors say the missionaries were correct in trying to change the custom of polygamy, but it is their approach that was wrong. “They did not offer relevant teaching to Africans; instead they offered condemnation and ultimatums.” In contextualising the works within the Christian doctrines, the examples of polygamy are abounding. The book quotes US evangelist Billy Graham. “The Old Testament patriarchs had been polygamous. There must be reasons for the modern practice of polygamy and I think that some of them are valid reasons.” The authors list Genesis 4:19 where Lamech married two women; Adah and Zillah. Gen 16:1-3, where Abraham married Hagar on the advise of his barren wife Sarah.  In Gen 11:26-29, Abraham’s brother Nahor was also a polygamist. He married Milcah and Reumah. King Solomon had 700 wives and 300 concubines.  Yet the New Testament also offered something else. Titus 1:6 and 1 Timothy 3:1-5, teach that to be an elder in the church a man must be married to only one wife.And in Luke 16:14, Jesus notes: “No servant can serve two masters; for either he will hate the one and love the other, or he will be devoted to the one and despise the other.” No chapters out rightly condemn polygamy.  Chapter 12 of the book headlined ‘Come to Christ as you are’, borrows greatly from the works of Bishop Yostus Ruhindi of Bunyoro-Kitara Diocese in the 1970s in which he sought to bring all to God.  The chapter advocates that all people should be welcomed into the church. The fundamental issue, then, that the primate seeks to address is that polygamy continues to bedevil the Church yet no solution is sought.To him, polygamists should be given an opportunity to participate in the affairs of the Church and must be guided. Also, those accepted should learn the ways of the church.  The big questions in the book are: “Where is polygamy condemned?” and “Where in the Bible is marriage between the same sex sanctioned?” achekwech@ug.nationmedia.com