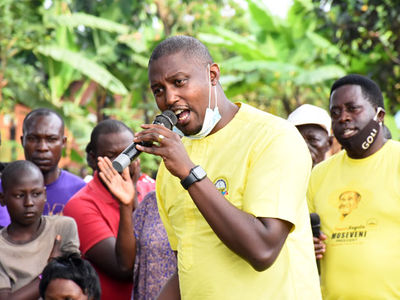 As curtains close on campaigns today, three Opposition candidates and five Independents want to reclaim the Jinja West constituency, a seat which has been occupied by National Resistance Movement (NRM)’s diehard, Mr Moses Grace Balyeku.Mr Balyeku in 2011 defeated Forum for Democratic Change (FDC) strongman Harry Kasigwa after the latter had served for two terms.The other candidates include Mr Hannington Basakana (Alliance for National Transformation), Dr Timothy Lusala Batuwa (FDC), Mr Alex Waiswa Mufumbiro (National Unity Platform)  (NUP) and Independents Ivan Isiko, Lazarus Namaddu, Najib Kezaala, Iga Ibrahim Omaidu and Geoffrey Mutisa.Mr John Okello, a Democratic Party (DP) councillor representing Persons with Disabilities (PWDs) at Mpumudde-Kimaka Division, says other candidates are yet to create an impact. “I am a member of the DP, but the truth is that our candidates in Opposition cannot beat Mr Balyeku because of his achievements,’’ he says.He adds that Mr Balyeku cemented his political ground in Jinja South West by building health centres, markets, churches, mosques, and has been campaigning with a theme of constructing shopping malls and injecting cash into community Saccos.This is besides his Baba Media Group,  which comprises a radio and television station.“I urge my supporters to turn up in big numbers on Thursday, whether it is raining [or not]. Don’t support by word of mouth, but by voting for me and candidate Museveni,”  Mr Balyeku says.However, Mr Basakana, Dr Batuwa and Mr Waiswa, believe they can repossess the constituency.Mr Basakana says he is counting on his unblemished track record during his tenure as district chairman and clear articulation of issues as his tools to defeat Mr Balyeku.

Dr Batuwa says he is a new entrant in the constituency with fresh ideas .However, his critics say since he had previously contested in Kagoma County, he should have remained there.Dr Batuwa says Jinja is an FDC stronghold, adding that he is convinced that they will give him the mandate. “Jinja has been engulfed by mafias who take Parliament as a business centre to transact political businesses; I represent this generation,” he says.While Mr Waiswa would count on the NUP, he is being accused of spending plenty of time traversing the countryside with the NUP presidential candidate, Mr Robert Kyagulanyi Ssentamu, aka Bobi Wine,  at the expense of his own campaign.With NUP being a new political party, it is also unclear on what yardstick voters will use to make an informed assessment.Mr Waiswa’s critics say he miscalculated by crossing to Jinja South West constituency, saying he should have remained in Jinja South East where he had contested before.He promises to  tackle  joblessness and  land grabbing.The Commission of Inquiry into Land matters in 2019 issued criminal summons for Mr Balyeku over allegations of influencing the issuance of freehold title over Plot 24 B Kyabazinga Way in Nalufenya.  He challenges those who allege that he has grabbed properties to produce evidence.Mr Omaidu seeks to develop Jinja South West and offer proper representation and articulation of voters’ interests.

A Million Bucks Up for Grabs This Jan-worry: Download the Kagwirawo App, Stand a Chance to Win Shs 1M

A Million Bucks Up for Grabs This Jan-worry: Download the Kagwirawo App, Stand a Chance to Win Shs 1M