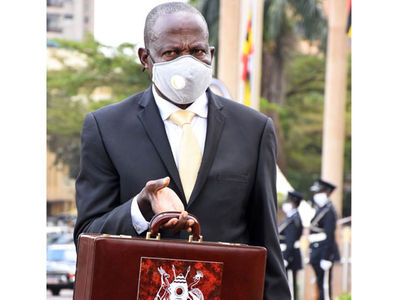 The government expenditure in the first four months of the Financial Year 2020/21 has dropped from Shs5.8 trillion to about Shs3.5 trillion on account of dwindling revenue collections. Government spending has nose-dived mainly because of the Covid-19 pandemic that has affected the various sectors of the economy.The implementation of the Budget in the first four months thus far has been affected by severe shortfalls in domestic revenue collections, coupled with underperformance in expenditure in part, due to slow execution of infrastructural projects. The latest Bank of Uganda (BoU) report (released on December 21) states: “This was mainly due to an under performance of Shs2.8 trillion in development expenditure. The shortfall in development expenditure is attributable to slow absorption by some government projects. Current expenditure and net lending repayment were also lower than programmed by Shs715.8 billion.” Authorities at BoU explained that expenditure pressures, especially related to combating the effects of Covid-19, and the upcoming general election, coupled with projected shortfalls in revenue, have raised the financing gap by almost Shs6 trillion in FY2020/2021. “The fiscal deficit is thus projected at 10.4 per cent of GDP. In that regard, Parliament approved a supplementary budget and related financing amount of Shs3.258 billion from domestic sources, and $600m (about Shs2 trillion) from external sources,” the central bank reports. On the stock of Public Debt, the central bank states in the report that total public debt increased by 21.7 per cent in FY2019/2020. External debt increased from $8.35b to $10.45 billion, while domestic debt increased from Shs16.2 trillion to Shs19.1 trillion. “As a percentage of GDP, nominal public debt increased from 35.3 per cent in June 2019 to 41.0 per cent in June 2020. In Present Value terms, public debt to GDP increased from 27 per cent to 31.8 per cent,” said the central bank. Advertisement

“The provisional total public debt stock as at end October stood at Shs63.352 trillion, corresponding with an increase of 13.8 per cent from June, compared to an increase of 3.9 per cent over the same period the previous year. Public external debt continued to maintain the dominant share of 67.5 per cent of the total public debt.” On the economic outlook, the central bank explained in the report that economic growth is projected to increase to 3.5-4.5 per cent in FY2020/2021, further to 5.0-6.0 per cent in FY 2021/2022 and to between 6.5-7.5 per cent beyond.The central bank further states that this, coupled with the increasing fiscal financing pressures, could pose significant downside risks to the growth outlook.“However, the recent developments surrounding the Covid-19 vaccines present a positive picture to the outlook.The central bank further points out that the outlook for Uganda’s economy is uncertain and depends on a wide range of developments, revealing that GDP is expected to recover gradually over the coming years. According to the bank, the pandemic will have long-lasting effects on the economy.Economic Growth is projected to recover to pre-Covid levels in FY2022/2023. “Many businesses in the service sectors, such as transport, entertainment and leisure, could become insolvent if demand does not recover, triggering large-scale job losses. Rising unemployment is also likely to worsen the risk of poverty and deprivation for millions of informal workers, particularly,” the central bank notes.Governor speaks outIn the monetary policy statement of December 14, BoU governor Emmanuel Tumusiime-Mutebile, explained that Uganda’s economy registered a growth rate of 3.3 per cent in the quarter that ended October, compared to the sharp contraction of six per cent registered in the quarter ended June. The gradual recovery in the economic growth has influenced the central bank to maintain the Central Bank Rate (CBR) at seven per cent for the third time in an effort to encourage low lending rates to the private sector to support the various economic activities they are engaged in the country. Judging from what is happening nationally, regionally and internationally, Mr Tumusiime-Mutebile explained that there is still considerable uncertainty surrounding economic developments and there is need for monetary policy to remain accommodative until the economy sustainably normalises since inflation is projected to be well contained over the medium-term.