Maro Bashed for Promoting Song Instead of Joining ‘Struggle’

I Got my Wife from a Bar – Kabako

Museveni warns Bobi Wine: you’ll regret it if you fight me 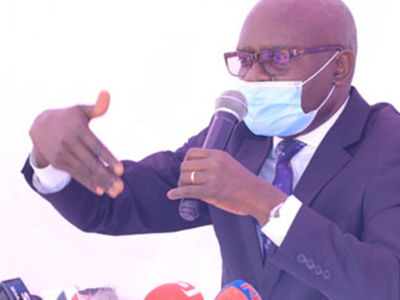 The Electoral Commission (EC) on Wednesday settled fears of who is going to print next year’s presidential ballot papers after it awarded the contract to an Abu Dhabi-based firm, ending months of uncertainty. According to EC, United Printing and Publishing (Abu Dhabi) will print ballots for presidential and directly elected Members of Parliament (MP) while Al Ghurair Printing and Publishing LLC (Dubai) will handle ballots for district Woman representatives to Parliament, district/city Woman councillors and sub-county/town/municipal division Woman councillors.The EC chairperson, Justice Simon Byabakama, also invited the 11 presidential candidates in the race to each nominate an agent who will travel to three countries to witness the printing of the ballot papers at their own cost. “The EC has officially communicated to political parties and candidates participating in the elections, inviting them to nominate official agents for accreditation, to travel to the above countries and observe the printing, packing and delivery of these critical electoral materials, at their own cost,” Justice Byabakama wrote yesterday.Other companies involved in printing the ballot papers include Uniprint (SA), Durban South Africa, which has been given district/city chairpersons, district/city directly-elected councillors, municipality/city division chairpersons and municipality/city division Women councillors.Tall Security Print Ltd (UK) will print ballots for municipality directly-elected councillors, Special Interest Groups at district, municipality and sub-county levels while Adare Sec Ltd (UK) has received the contract for Sub-county/town/municipal division chairpersons and Sub-county/town/municipal division directly-elected councillors. Advertisement

But local printers yesterday said they were unfairly excluded from the deal even after they appealed to the Public Procurement and Disposable of public Assets Authority (PPDA) and had not received communication on the way forward. Mr Frank Tamenya, the manager of Wave Media, yesterday said: “…It is 100 per cent clear that they gave back the work to foreign companies. Because if they didn’t, who is going to print them and at what time? There is no time. We are waiting for them to tell us what they have decided. Nothing we can do now. When you do bidding, you expect to lose or win. If they don’t consider us, we shall concede that we have lost unfairly.” His counterpart at Inline Print Services, who only identified herself as Eva, said they have been told they cannot print the ballots because they do not have the capacity.The country goes to the polls for presidential and parliamentary elections on January 14. According to Justice Byabakama, they should be with the ballot papers early December. Through their umbrella, Uganda Printers and Packaging Association, local ﬁrms like, Multiplex, Picfare Industries, Wave Media, Graphic Systems and Inline Print Services petitioned PPDA that they were unfairly excluded from the ballot paper printing deal.

By Monitor Reporters Independent presidential candidate Lt Gen Henry Tumukunde has been blocked from accessing Bundibugyo District to address his supporters.According to the programme released by the Electoral Commission (EC), Gen Tumukunde was supposed to...

By Michael Woniala Ms Nancy Linda Kalembe has pledged to end land conflicts between Uganda Wildlife Authority (UWA) and communities living around Mt Elgon National Park when voted president.Ms Kalembe, who is the only woman...

By Franklin Draku The Ministry of Gender,  Labour and Social Development yesterday started inspecting external labour companies ahead of their reopening. The ministry said the inspection is focussing on the level of compliance and preparedness to...

By AFP News The number of Ethiopians to have fled to Sudan from the deadly Tigray conflict has reached 36,000, Sudan's refugee commission said Wednesday, as fighting rages across the border."The total number of refugees...

Museveni in talks with Mbabazi

By Misairi Thembo Kahungu By Tobbias Jolly Owiny President Museveni Tuesday confirmed he is in talks with his former Prime Minister, John Patrick Amama Mbabazi, with a view patching up their differences. Addressing NRM leaders and flag...