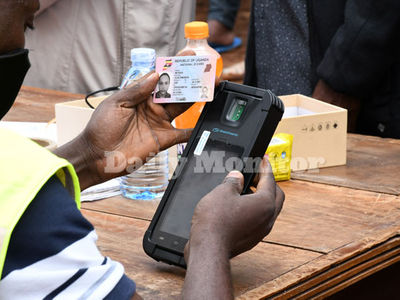 Glitches of defective biometric voter machine and change in voters’ polling stations Thursday delayed the start of polls across West Nile.As a result, voting started in most areas at least 2 hours after the official 7am opening hour.For instance at Awindiri Primary School Polling Station in Arua Central in Arua City, Ms Grace Adiyo, a voter, said she nearly gave up voting due to the inordinate delay.“I arrived here [at the polling station] at 7am and wanted to cast my vote early and go for business, but the biometric machine did not work. I had to wait for two hours before it was rectified. In future when such systems are being introduced, the EC should ensure it provides what is efficient,” she said.At Mvara Junior, Dorina, Awindiri and Arua primary polling stations, similar glitches with biometric voter machines caused delays. Some disillusioned voters tried to walk away, but agents of various candidates talked them back.Mr Juma Adam, the returning officer for Arua City, said: “It is true that in some areas the biometric systems were slow, but we gave guidance that people can use the voter (location) slips and be allowed to vote.” Advertisement

In the new Ayivu West Constituency in Arua City, incumbent Ayivu MP Bernard Atiku said they expected the EC to extend the voting hours because many voters risked being disenfranchised due to the delayed voting.Across polling stations, there was comparably a higher voter turn-out in rural than urban areas. In Moyo district, Mr Clement Koma, a voter, said he was frustrated by inefficient biometric machines that could not read his finger prints. “The EC should have deployed more technicians to work on the machines,” he said.EC introduced biometric voter machines to ensure accuracy and transparency in voter identification and verification and eliminate multiple voting.In Koboko Municipality where the contest is a dead heat between ruling National Resistance Movement flag bearer, Dr Charles Ayume and Independent candidate Charles Yakani, voting started an hour late.Voting was reported peaceful in Yumbe, Nebbi, Zombo, Pakwach, Terego, Maracha, Madi-Okollo, Pakwach and Adjumani districts. However in Obongi district where bitter contest between Forum for Democratic Change candidate Hassan Kaps Fungaro and NRM’s Dr George Bhoka has led to bloody clashes and deaths during campaigns, UPDF deployed heavily amid accusations that some of the soldiers intimidated voters and journalists.Reported by Felix Warom Okello, Rashul Adidi, Scovin Iceta, Robert Elema, Robert Atiku, Patrick Okaba & Ibrahim Adubango.