Diamond Platnumz is too professional to ask for sex – Spice Diana

NBS After 5 to celebrate five years with a charity 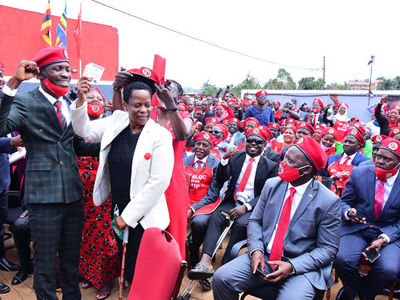 On September 13 presidential aspirant Robert Kyagulanyi, popularly known as Bobi Wine, with his customary blaster assured his supporters of how he was going to overturn President Museveni’s more than 30-year hold on power come February 2021. Bobi Wine made the declaration by video conferencing through Zoom with a sizable crowd of Ugandans in the diaspora. The “diaspora community” have been a key cog in the People Power movement, which a couple of months ago morphed into the National Unity Platform (NUP).   They have mobilised resources, drummed up support online and also claim to have connected Bobi Wine to influential liberal media in the West. Bobi Wine’s supporters, specifically in the United States, went ahead to form and register a non-profit entity they named “People Power”, whose accounts they use to mobilise money.   But there has been some unease within the diaspora community in the past two months, with some of its leaders resigning as accusations against the managers of NUP fly about. The accusations involve financial impropriety, lack of accountability, tribalism, sexual harassment, and physical assault.  In recent months, Morris Komakech, Maurice Ogili and Henry Ssali, who were People Power coordinators in Canada, resigned, joining the camp of presidential aspirant Lt Gen Henry Tumukunde.    If the resignation of the trio did not raise eyebrows, then that of Ms Arao Ameny, did. From 2019 to July, Ms Ameny had been the pioneer leader of the People Power diaspora team.   By the time she resigned, Bobi Wine had not yet announced that he had procured NUP, whose ownership is now subject to court proceedings and media debate.  According to a trove of emails that Sunday Monitor has seen, over time, Ms Ameny had got increasingly nervous over the power Bobi Wine’s elder brother, Mr Fred Nyanzi, wielded within People Power, now NUP.  Mr Nyanzi was leading People Power’s informal sector strand at the time. Once NUP was secured in July, he was appointed the party’s secretary for mobilisation.  Ms Ameny claimed to have sensed a striking resemblance between the role Mr Nyanzi played in People Power and that which President Museveni’s younger brother, General Salim Saleh, plays in the current government. Mr Nyanzi had been a de facto vice president. Ms Ameny also accused one of the People Power’s leaders of assaulting Ms Angela Namirembe, the People Power national deputy youth leader for Buganda at the time.  Mr Joel Ssenyonyi, the spokesperson for NUP, dismissed Ms Ameny’s claims, saying she was bitter and resigned because her powers were trimmed.  “We really respect her but we understand she was disappointed when we reduced her authority,” Mr Senyonyi said.  Ms Ameny said her biggest disagreement with People Power bosses in Kamwokya was the lack of accountability of the funds Ugandans in the diaspora were banking in a People Power account opened in the Bank of America Corporation. The signatories to the said account were Ms Ameny heself and Kharim Ntambi, the head People Power US chapter.    Sources familiar with Ms Ameny’s thinking say she had misgivings about the individuals who constituted what was known as the People Power finance committee.   One of the members, a source said, was campaigning for a parliamentary seat and Ms Ameny wondered whether he wouldn’t be tempted to divert the funds to his personal campaign. Ms Ameny, a source said, crossed the red line when she demanded that Kamwokya gives the diaspora team a breakdown of their expenses. “She wanted to know how much is spent on masks, salaries, secretarial work, litigation and getting People Power youth wingers out of jail. How much was spent on the beans and posh bought for starving Ugandans during the Covid-19 induced lockdown. They were not giving any answers or receipts to Ameny,” the source said.  When the questions came in, the source says, those with power in Kamwokya in Kampala, the party headquarters, swiftly moved to trim Ms Ameny’s powers.  They divided the People Power diaspora structure into 22 separate sections and the new groups were told to directly report to Kamwokya, as opposed to the diaspora leader as the case was before Ms Ameny started raising financial and accountability questions.“Before, People Power had USA, UK and Scandinavia,” a source said, “And those who lead those sections were supposed to report directly to the diaspora leader but that changed.”The source also said Mr Ssenyonyi accused Ms Ameny of trying to create a parallel structure in the diaspora by sidestepping Kamwokya, the seat of NUP. The source added that Mr Lewis Rubongoya, the NUP secretary general, gave orders to the new diaspora team to wire the money directly to Kamwokya on a mobile money number.   When asked about the allegations, Mr Rubongoya referred us to Mr Senyonyi, who once again insisted that there was no big issue that Ms Ameny raised, except that she was just frustrated after Kamwokya reduced her powers.    Advertisement

After Ms Ameny resigned, Bobi Wine replaced her with Herman Ainebyona.  Upon taking over, an email written by Ms Ameny and seen by this newspaper indicate that Mr Ainebyona removed her from two WhatsApp groups that she had created for the “Diaspora to connect, engage, strategise, plan, and collaborate”. In the email, Ms Ameny accuses one Mr Joel Ssemakula, who is one of the People Power coordinators in the US, of making tribalistic comments against her, something the opponents of People Power and now NUP have at times raised.But Mr Senyonyi denied the tribal charge, saying that Mr Ainebyona, who replaced Ms Ameny, is from western Uganda and not from Buganda, where their detractors point out that most of them hail from.

By Alex Ashaba A burial in Fort Portal City’s Rubingo North Division turned chaotic on Sunday after irate mourners set the body of the deceased on fire. Amos Mugume was allegedly pursued, shot and killed...

By Andrew Bagala All was set for the momentous day in Ms Christabella Banturaki’s life. Ms Banturaki and prospective husband, Dr Patrick Mbusa Kabagambe, were to set to tie the knot at All Saints Cathedral...

By Tonny Abet Government has said it is expecting four million doses of single-shot Johnson &Johnson Covid-19 vaccine through the African Union as arrangements to manufacture the serum in South Africa get finalised.Prof David Sserwadda,...

By Patrick Ebong By Bill Oketch More than 2,000 special police constables (SPCs), who were recruited to provide security during the recently-concluded general election, have refused to hand over their uniforms over unpaid salaries. They...

By Franklin Draku Officials from the Labour ministry and International Organisation for Migration (IOM) have agreed to work closely to safeguard the rights of migrant workers that Uganda sends to the Middle East and other...

By Alex Ashaba More than 150 families, part of the 10,000 people who were displaced by the floods two years ago after water levels in Lake Albert rose, are living in a dire condition. The...