Bobi spends night in jail amid calls for end to police, army brutality

I Didn’t Want to Be A  Singer — Kabako 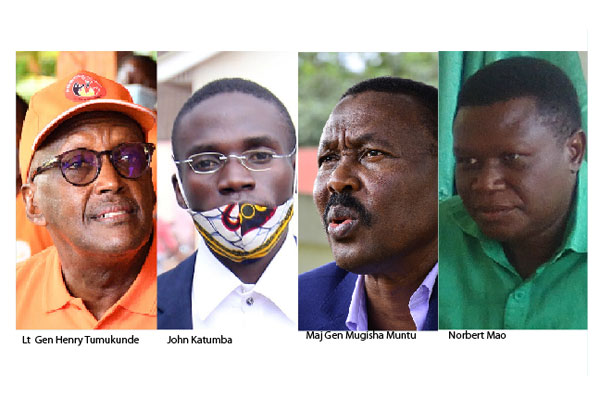 Four presidential candidates have suspended their campaigns following the arrest of their colleagues Mr Robert Kyagulanyi and Mr Patrick Amuriat.Mr Kyagulanyi, alias Bobi Wine, the president of National Unity Platform, is still being held at Nalufenya Police Station in Jinja while Mr Amuriat was on Wednesday night released from Gulu Police Station.The Alliance for National Transformation, presidential candidate, Maj Gen Mugisha Muntu, independent candidate John Katumba, Lt Gen Henry Tumukunde of Renewed Uganda, and Democratic Party (DP) presidential candidate Norbert Mao,  have halted their campaigns to empathise with their colleagues.Kampala Lord Mayor Erias Lukwago also announced he would indefinitely suspend his campaigns seeking re-lection.Gen Muntu described the arrest of Mr Kyagulanyi and Mr Amuriat by security forces as reckless and disrespectful.“The act in itself is reckless and it is also disrespectful. If a presidential candidate can be arrested in that manner, the population should ask themselves what happens to people who are not at that elevation?” he said. Advertisement

Gen Tumukunde told journalists in Fort Portal yesterday that it is wrong to continue with his campaign when his fellow presidential candidates are being brutalised.‘‘We have discussed between us Renewed Uganda platform and we agreed that we call off this campaign in support of our colleagues and in protest of the treatment all of us we are receiving in this very election,” he said.He said he was in Bundibugyo on Wednesday and the DPC was threatening to shoot him.“We are also talking with the members of the Opposition presidential candidates to see what we can do in this kind of circumstances,” Gen Tumukunde said. Tumukunde was yesterday supposed to campaign in Kamwenge, Kitagwenda, Kyenjojo and Kyegegwa districts.Mr Katumba said he would resume his campaigns after Mr Kyagulanyi has been released.“Why should I keep on campaigning when my brothers and fathers are dying?” he asked. Mr Katumba was supposed to be in Bukedea, Kumi and Bulambuli.While addressing the media in Hoima Town this afternoon, Mr Mao said the prevailing election environment is characterised by brutality from security agents.“I wish to announce that we are suspending our public meetings and rallies with immediate effect until further notice. Our caravan will be put to a halt. We are not in the business of participating in an empty rituals while pretending that it’s an election,” Mr Mao said.Mr Mao called upon the EC to intervene and ensure that candidates have a levelled field or they re-write the rules or simply call off the elections.The two candidates were arrested for violating Ministry of Health and the Electoral Commission guidelines that require candidates to address or meet less than 200 people.Police said the two have been violating these guidelines despite warnings.These arrests have sparked off protests in different parts of the country that have left a number of people dead.Elections experts sayIndependent elections analyst Crispin Kaheru said such chaotic scenes cast doubt on the credibilty of the electoral process. “The incidents of violence at hand in different parts of the country points to one thing: that as a country we have failed the test of a ‘hybrid election’ amid Covid-19 pandemic.  It is therefore prudent that the Electoral Commission suspends physical campaigns with immediate effect until such a point when the body regains full control of the electoral environment.  Life is more important than elections,” Mr Kaheru said.Human rights lawyer Nicholas Opiyo reechoed the sentiments, citing the gross human rights violations that were witnessed on Wednesday. “The logical thing to do is halt this charade of a campaign process; recall the candidates and agree on a modus operandi for what is left of the process; and importantly ask the EC to either take control of the process or save us the time and resources and declare the predetermined winner,” Mr Opiyo tweeted.Reported by  Irene Abalo Otto, Alex Ashaba,  Nobert Atukunda and Elizabeth Kamurungi, Otage Stephen and  Francis Mugerwa

Bobi spends night in jail amid calls for end to police, army brutality

By David Vosh Ajuna “Police should know that it is incumbent upon them to serve the citizens with absolute fairness, equity and humility,” hankered National Unity Platform (NUP) spokesperson Mr Joel Ssenyonyi, late Wednesday night...

By Ephraim Kasozi Makindye West MP Allan Ssewanyana has been remanded to prison for allegedly violating the Ministry of Health guidelines to curb the spread of Covid-19 pandemic.The Magistrate’s Court at Makindye remanded the legislator...

By David Vosh Ajuna Uganda People’s Defence Force (UPDF) have warned politicians against flouting Covid-19 restrictions issued by government and its relevant agencies as well as the local laws.“If this defiance does not stop, we have...

By Job Bwire Police have said the death toll in yesterday’s protests that broke out following the arrest of presidential candidate, Robert Kyagulanyi alias Bobi Wine, is now seven with 45 people nursing injuries.“As of yesterday...

By Alfred Tumushabe By Rajab Mukombozi Independent Presidential candidate Mr Willy Mayambala on Wednesday failed to campaign in South Western Uganda due to lack of fuel.He was expected to campaign in the districts of Mbarara,...