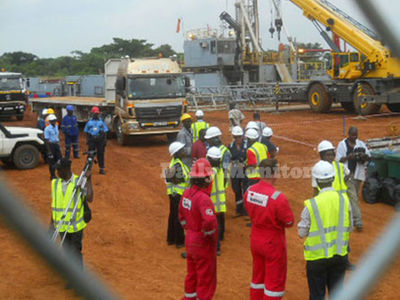 As Ugandans go to the polls on January 14 to elect the president, it appears that the presidential candidates have lacked depth to articulate the oil and gas sector, writes Emmanuel Mutaizibwa & Francis Mugerwa.The Albertine graben in Bunyoro Sub-region holds some of the 6 billion barrels of oil, part of which were discovered on the shores of Lake Albert that straddles the DRC-Uganda border. In the sub-region, communities have been evicted as firms dig the bowels of the earth to establish infrastructure projects. The sub-region contains some of the most bio diverse ecosystems, which could be exposed to the carbon footprint.Human rights defenders in the Albertine have been at the forefront of advocating for the rights of communities and protecting fragile eco-systems against powerful power-brokers and corporations. But a recent report suggests that many human rights defenders in the area are shirking their responsibilities as a result of attacks from government. The recent clampdown on a number of NGOs and the detention of human rights lawyer Nicholas Opiyo suggests that there is narrowing civic space as the country heads towards the polls. Key concernsMr Dickens Amanya, the coordinator of Bunyoro Albertine Petroleum Network on Environmental Conservation, says there are concerns relating to intimidation and arbitrary detention of human rights defenders in the Albertine who have heeded the clarion call to defend locals.Ms Jeniffer Baitwamasa, who works with Navigators for Development Association, an NGO, says: “There is a lot of intimidation towards locals and activists looking at human rights and fair compensation. At times you receive calls from security operatives stopping you from going to attend some meetings. Most of those who make threats are not in uniform and some oil firms go to communities and blackmail people into signing compensation agreements.”The ActionAid International Uganda country director, Mr Xavier Ejoyi, says the issue of accountability remains outstanding as much of the civil society field work is premised on this aspect.  Advertisement

“How is Uganda accounting for the exploration, the drilling and the revenue sharing of the oil? As we know, the production sharing agreements are not made public to Ugandans. As citizens, we deserve to know about the oil proceeds; have we put this question to the citizens whether the debt burden will be in tandem from the revenues that will accrue in future?” Mr Ejoyi argues.Against this climate of fear and apprehension in the oil and gas, the presidential campaigns have not been any better. Earlier on in November, more than 50 people were shot dead during riots sparked by the arrest of presidential candidate Robert Kyagulanyi. Within such a toxic atmosphere, it has been difficult for presidential candidates to preach bread and butter issues including the oil and gas sector. The incumbent, President Museveni, has not said much about the oil and gas sector during his campaign trail. He has previously promised to use the funds accruing from the sector not to purchase luxurious items but to uplift the wellbeing of citizens. “We shall use the finite resources to build durable capacity for our economy,” Mr Museveni said. The oil revenues will also be used to finance the construction of a new railway and a “few” roads. They will also fund science and innovation, irrigation across the country, renewable energy resources, and high tech education,” he said during the Oil and Gas Summit held in Kampala in 2016. But going by the past record, there is ambivalence about the current government’s track record. There are accusations that the government has not been squeaky clean in the area of transparency and accountability.For instance, after depleting the Petroleum Fund, government is now looking for other options to plug gaps in its pre-election year.Between 2017 and 2019, with the blessing of Cabinet and Parliament, Finance minister Matia Kasaija withdrew a Shs770.3b from the Petroleum Fund and channelled the money to the Consolidated Fund. Section 59(3) of the Public Finance Management Act as amended (FMA), 2015, ring-fences oil revenues to financing infrastructure and development projects only. It is not clear yet whether the funds were spent on these specific items.However, in August 2020, Uganda joined the Extractives Industries Transparency Initiative (EITI). The initiative is a global standard to promote the open and accountable management of the extractive industry. RequirementsMs Sophie Kyagulanyi, the governance and accountability manager at Oxfam Uganda, says for the purpose of compliance with the EITI, “Uganda ought to publish the production sharing agreements (PSAs) and secrecy codes in PSAs [should be] removed; the other is to understand the revenue management regulations.Currently we have the Public Finance Management Act but what we are looking at is that there is going to be largely need to separate the revenue management.” “Looking at public revenue management from taxation and petroleum revenue management should be different, it will be paramount in the next five years to ensure that we have regulations; [they] could be laws, [they] could be guidelines, [they] could be standards that allow us to manage petroleum revenues a bit differently from how we had planned. Given that today we don’t have regulations for the Public Finance Management Act, it leaves us in a vulnerable position in terms of revenue management going forward,” she says.Of all manifestos, the NRM’s is the most elaborate on the oil and gas sector. It specifically speaks about the development of the East Africa Crude Oil Pipeline, the refinery and airport in Kabaale, Hoima District. It also provides for a roadmap to execute key agreements by the end of 2020 in time for the Final Investment Decision (FID). Several presidential candidates have also spoken out on the oil and gas sector. While campaigning in Bunyoro recently, the ANT presidential flag bearer, Maj Gen (Rtd) Mugisha Muntu, said the current regime cannot be trusted with oil money, and accused the incumbent President of erroneously claiming that the resource ‘is my oil. ‘“This is not Gen Museveni’s oil; it is a national resource that must be utilised for the benefit of all Ugandans,” Gen Muntu said.He also lashed out at government for the secrecy that shrouds the petroleum industry. Whereas various candidates have specifically addressed the issue in their manifestos, they have fallen short of articulating the oil and gas policy amid challenges such as the shift towards renewable energy.The NUP manifesto is silent on the oil and gas sector but their candidate, Mr Kyagulanyi, has promised to ensure accountability in the sector and ensure that host communities benefit at his rallies.Independent candidate Joseph Kabuleta, who hails from the Bunyoro Sub-region, says he will renegotiate the oil contracts government has made with international oil companies because they are not transparent. FDC manifestosThe FDC manifesto is not specific in addressing the oil and gas sector but takes a wider view of the country’s mineral potential that it says remains underdeveloped. “It is marred by corruption and is grossly under explored for commercial mining. There is rampant and deliberate under collection and under-declaration of royalties amounting to billions of Uganda shillings over several years for exports of gold, tantalum, and tungsten, among others,” partly reads the manifesto.As part of the solution, the FDC plans to auction mineral exploration licences, rather than insider-dealing.  This will in its view, “increase competitiveness and ensure that the government gets maximum revenue from these licences.”

We have been offered money to betray Bobi Wine

We have been offered money to betray Bobi Wine