How boxers have been sucked into the ‘dirty game’

How boxers have been sucked into the ‘dirty game’ 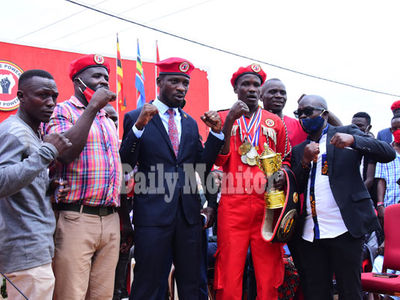 Three Ugandan boxers were supposed to fight in Russia on December 27 last year, but the event was postponed reportedly because their opponents tested positive for Covid-19.It was rescheduled to January 23, but none of the Ugandan fighters is ready: one is in prison, one was still missing by press time, and another was killed by security operatives.Joseph Lubega, alias Joe Vegas, has been missing since the evening of  Tuesday, December 29, last year. Hours later, Isaac Zebra Ssenyange, alias Mando, was gunned down by government commandos near his home in Bwaise, Kampala.The following day, Robinson Ntambi Mudde was arrested near his home in Katanga, Wandegeya in Kampala, and whisked away to a prison in Masaka, where he met other supporters of the National Unity Platform (NUP) presidential candidate  Robert Kyagulanyi’s campaign team.On Thursday, the detainees were sent to the Military General Court Martial in Makindye in Kampala, which on Friday charged them with possession of ammunition and remanded them to Kigo and Kitalya prisons until January 19.The boxers’ families say the accusations against their loved ones is simply political witch-hunt.A few months ago, Lubega and Mudde led a group of boxers to the NUP party headquarters in Kamwokya, to declare their open support for Kyagulanyi, alias Bobi Wine’s presidential bid.Lubega posted on Facebook his photo with Kyagulanyi, both wearing red berets, and smiling.It was a bold move by these ring combatants, considering that Salim Uhuru and Moses Muhangi, who lead the professional and amateur boxing bodies, are NRM cadres.Uhuru and Muhangi are not allies but agree that boxers have a right to support a candidate of their choice.Yet the boxers’ declaration of their affiliation was not out of the blue. Kyagulanyi was their close friend before joining politics.

When Kyagulanyi’s private bodyguard Frank Senteza was allegedly killed by a military vehicle in Busega, last month, Mudde posted on Facebook: “So bad to lose my friend Frank.”Sources told us that Senteza, like many of Kyagulanyi’s guards, trained under Mudde at Rhino Boxing Club, a makeshift gym in Kimwanyi Zone in the Katanga slums of Wandegeya. Mudde’s wife confirmed it.Kyagulanyi was also a regular at the gym, which is about two kilometres from Kamwokya, where he grew up from. Sometimes, Mudde trained at Kyagulanyi’s gym in Kamwokya, his wife said.Lubega also owns Jose Boxing Club in Kagoma, but also trains at Rhino, especially ahead of a fight abroad.Throughout his political life, Ssenyange was a staunch NRM supporter and mobiliser. And often, party members hired his trainees to provide security for political campaigns. But he was also close to Kyagulanyi, and trained him in boxing, before the musician joined politics.No wonder there were suspicion that he was killed for training Kyagulanyi’s guards.Ssenyange was also loyal to Kawempe Division Mayor Emmanuel Sserunjogi, who referred to him as “my son.” Sserunjogi is contesting on NUP party ticket, while Christopher Lubega, a Forum for Democratic Change (FDC) party candidate for LC III councillor in Kawempe, told us that the evening before Ssenyange was killed, he had offered to rally his boys to support him.Ssenyange too was a regular at Rhino, though he owned a club in Bwaise. He belonged to the same boxing promotion as Mudde and Lubega. And some of the boxers he used in national club competitions originally belonged to Rhino and lived in Katanga.But these close ties to Kyagulanyi, arguably the main challenger to incumbent President Museveni, could have put the boxers on a collision course with ‘the law’.

Eddie Bazira About six months ago, Kawempe Peacekeeping Vanguard (KPV), an amalgamation of disgruntled ghetto youth gangs, was formed.Jackline Bakira, Mudde’s wife told us that Ssenyange, the founding chairman, asked Mudde to join.Innocent Kapalata, another coach at Rhino, Veronica Bakira, sister of Mudde’s wife, and Ssenyange’s wife, joined the group.But Bakira told us Mudde refused to because KPV was an NRM initiative allegedly formed to counter and neutralise the Opposition, and especially NUP party influence in the ghetto. (Some KPV members wore full NRM uniforms at Ssenyange’s burial and were insulted by the largely NUP-leaning crowd).“I cannot betray Kyagulanyi, we have come a long way,” Mudde told his wife.Bakira, who has known Mudde for 13 years, added that Mudde and Kyagulanyi grew up together, and were friends, way before many of his popular allies such as Eddie Ssebuufu, alias Eddie Mutwe, joined his team.But Hood Hussein, the Kampala deputy RCC, in charge of Kawempe Division, says KPV’s objective is to ensure peace and reforming the delinquent youth in the ghettos through enhancing them with life skills.  (Last month, Hussein courted controversy when he vowed to never let Kyagulanyi and the FDC’s Patrick Oboi Amuriat campaign in his area because their massive rallies are ostensibly likely to escalate the spread of Covid-19. He also attempted to ban weddings and other social gatherings, “because politicians use them as campaign platforms.”)Mudde has been a professional boxer since 2005, who won the Universal Boxing Organisation World (UBO) Super Fly Title in 2011. He also owns a unisex salon in Katanga.But these are not the first boxers to show their political colours. Godfrey Nyakana, a former professional, is an NRM cadre, who served as the LC III chairperson for Kampala Central.Uhuru is a former boxer contesting for the Kampala Central Mayoral sit on the NRM party ticket.Eddie Bazira, Mudde and Lubega’s promoter, is a former boxer. As an independent candidate, he is battling Erias Lukwago for the Kampala City Lord Mayor seat.Boxing gyms train different people. And for different reasons: fitness, health and sports. Some never even step into a boxing ring. But it is very easy to call them boxers because they associate with boxers.Ms Bakira said five years ago, Rhino dismissed three members over their alleged involvement in armed robbery. There has been no cases of criminality since then.Punished for being close to Bobi Wine?Around November, Mudde told his wife that he met security officials at Acacia Mall in Kamwokya, who reportedly offered to bribe him to denounce Kyagulanyi and join the NRM.Recently, Mr Museveni vowed to finish off NUP by convincing its supporters, majority of whom are disgruntled youth, to abandon it and join NRM.Kyagulanyi retaliated by accusing President Museveni of coercing and bribing his supporters.

Zebra SenyangeOn December 23, other security officers told Mudde that President Museveni was due to meet boxing trainers from the ghetto. The officers told him he was wanted because he was the leader of the ghetto ‘rebels’ in Wandegeya, who are reportedly planning to burn the city after the January 14 elections.Ssenyange was meant to meet Mr Museveni first, and after the boxer’s brutal death, the President said the operatives’ mission was to arrest him and interrogate him on the ‘rebel’ allegations.Robert Mukasa, aka Soldier Man, the boxing trainer arrested in the same raid that left Ssenyange dead, returned with wounds after reportedly being tortured by security operatives over the same allegations.Amid the threats, Mudde became less frequent at Kyagulanyi’s rallies but in the afternoon of December 30, he called his wife, who was attending the public viewing of Ssenyange’s body at Lugogo, informing her that he had been arrested.“The second call came in the night when he told me he was in a prison in Masaka,” Ms Bakira told us.One of the detainees, who was released on Thursday is nursing serious injuries reportedly, due to torture. He told Mudde’s wife that her husband was supposed to be released with him but was instead taken to Makindye Military Barracks alongside Kyagulanyi’s singing partner Ali Bukeni, aka Nubian Li, and others.Mudde had told his wife that he had been beaten in custody.Meanwhile, Lubega, a former World Boxing Council-International Light Heavyweight champion, had received several threats before his arrest.“Since early December, he told me of people who called and asked him about his dealings with Kyagulanyi,” says his elder brother Charles Ssemakalu, who is also a boxing trainer.Lubega, a former national captain, won a silver medal at the 2002 Commonwealth Games in Manchester, UK, but has lived a modest life after his professional career stalled in the UK. He has often cried to Mr Museveni to deliver the house he promised to each medal winner before the games.Lubega sold spare parts at Kisekka Market, a place in the city centre which was nicknamed Benghazi for its connection to dissent and strikes.His brother says his callers accused him of training the “rebels of Kisekka Market.”Ssemakalu was also meant to travel for the December 27 fight event, but he is also in hiding.“I told him to keep away from Kyagulanyi’s campaigns and he did. But the threats did not stop,” Ssemakalu says.Lubega even left his home in Kagoma on Bombo Road in Kampala to hide in a guest house, his friend Jaffar Kamya, who is contesting for the LC 5 Councillor for Mulago and Wandegeya on the NUP party ticket, said at Ssenyange’s burial.But Lubega was arrested in Busunju on Hoima Road, as he returned from a burial.“An anonymous caller told me that he was arrested by armed men.”Nearly two weeks later, Lubega’s family is frustrated after a futile search for his whereabouts.“We have tried several police stations and we shall try Kitalya Prison after elections,” Ssemakalu told us. “But we are very worried.”Lubega was the breadwinner for his extended family of 10 people.According to the Observer newspaper, this week, Ssenyange was killed after disagreeing with security operatives on the strategy to quell NUP supporters in Kampala. The local weekly also claimed that another boxer Justin Juuko was arrested for turning down the same deal.The 1990 Commonwealth Games gold medalist, who is also a mobiliser for the FDC party, was released on December 31, after 19 days in detention when the General Court Martial withdrew the charges of treachery and illegal possession of firearms against him.Ms Bakira said she was recently evicted from the premises where she operated a boutique and a restaurant near Makerere University over political reasons.She said her husband used to bring People Power-branded T-shirts, which were always in high demand.“It seems they want to frustrate us in all ways such that we succumb to their bribes,” Ms Bakira said, adding that she built one of the structures from which she was evicted.But her landlord told her that someone paid for two years and she must vacate the premises by January.Ms Bakira, a Makerere University graduate in Arts in Arts, was an NRM Youth councillor of Makerere University since 2016, but she says she has since quit politics.