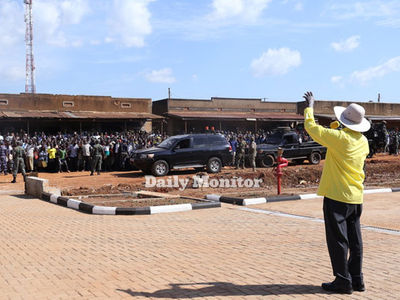 In 1996, when President Museveni was casting his vote in the presidential race, he sported military attire.He asked the voters to enable him make that transformation from a military leader into a civilian president.Mr Museveni won easily by shrugging off competition from Democratic Party’s (DP) Paul Kawanga Semogerere.  In the subsequent elections, which he won despite protestations from his rival Dr Kizza Besigye, Mr Museveni dumped his military attire for plain clothes on voting day.  Twenty five years later, when he cast his vote in his home district of Kiruhura on Thursday, Mr Museveni reverted back to wearing army uniform.Putting on army fatigues, according to analysts, symbolised how Mr Museveni has used security forces before and during the elections period to have a clear edge over his opponents.A day before the elections, in a move that was intended to send a message to the would be protesters, disputing his victory, armored military vehicles rolled into downtown Kampala, as fighter jets were scrambled in the atmosphere- an apparent show of force. Security forces have been used to enforce standard operating procedure (SOPS) that were instituted by the government ostensibly to guide the conduct of elections across the country, which is being hit hard by the Covid-19 virus. Advertisement

The Public Health (Control of Covid–19) (Amendment No.3) Rules, 2020, issued by the Ministry of Health, on November 9, 2020, provided that gatherings for purposes of political meetings should not exceed 200 persons.

Police fire teargas to disperse NUP supporters in Mbale City ahead of Bobi Wine’s visit to the area on November 15 last year. Photo | Abubaker Lubowa.The Electoral Commission (EC) at the beginning of the electioneering period issued guidelines which were to be followed by candidates. Therein, candidates were prohibited from conducting processions along public roads, through towns and trading centres.  With such laws, the army was given an excuse to crash Opposition candidates’ rallies throughout the election time, limiting the amount of time they had to interact with voters.  Mr Robert Kyagulanyi, commonly known as Bobi Wine, who has been the leading Opposition candidate in the race, thrice suspended his campaigns, accusing the security agencies of sabotaging his rallies and in certain instance killing his supporters.  Even before the EC would put a total ban on campaigns in about 12 districts, security agencies, for example, hadn’t allowed the National Unity Platform (NUP) candidate to campaign in Jinja and Kayunga districts and later his rallies were stopped in Kalangala District, though it wasn’t part of the districts in which campaigning was prohibited.Mr Kyagulanyi was once charged in a magistrate’s court in Iganga District after he was arrested in the neighbouring district of Luuka for ignoring guidelines that could check the spread of Covid-19, sparking off protests across the country in which more than 50 people were killed by security forces.  For Patrick Oboi Amuriat, the Forum for Democratic Change (FDC) party presidential candidate, his campaigns were largely frustrated by security forces from the word go.His would be first rally in Soroti City was dispersed by police, again citing Covid-19.  The trend continued as Mr Amuriat solicited votes throughout the country amid being pepper-sprayed.By the time the campaigns were settled, a frustrated Amuriat, who had nearly come to blows with a policeman, had been charged thrice in Mbarara, Kakumiro and Mpigi magistrates’ courts.Having spent a night in police cells and later released by court, Mr Amuriat was arrested upon arrival in Kampala and he spent another day in police cells at Katwe, in Kampala.Mr Amuriat had slated rallies for all these days in Buganda. The former Kumi Municipality MP wasn’t allowed to step a foot in the FDC stronghold of Kasese, yet other candidates, including Mr Museveni, Mr Kyagulanyi and Gen Mugisha Muntu of the Alliance for National Transformation (ANT), had successfully campaigned there. By the time Mr Amuriat’s turn to campaign in the district reached, the district had been put among those in which campaigns weren’t allowed due to Covid-19. Mr Amuriat’s pleas to campaign in the district using one of the radio stations in the area fell on deaf ears.

NRM presidential candidate Yoweri Museveni addresses a gathering in Busia Town on December 1, 2020. PHOTO | KELVIN ATUHAIRE.Mr Museveni, throughout the campaigns, used radio, more so in rural areas to deliver his campaign message but his opponents were largely prohibited from using the same medium.  Despite paying money, Mr Kyagulanyi was not hosted on a radio station in Hoima District after owners cited ‘orders from above’.  When Mr Amuriat was campaigning in the northern district of Amuru, the radio station at which he had been hosted was switched off while the barefoot presidential candidate was on air.  For a number of minutes, Mr Amuriat kept on talking without knowing that nobody out there was listening to him.                Covid-19: Blessing in disguiseWhile Mr Museveni ‘adhered’ to the Covid-19 rules, it was very clear they favoured him as NRM, his party, is arguably fused with the State.  Although Mr Museveni has largely avoided holding big rallies, public servants such as Resident District Commissioners (RDC) and Resident City Commissioners (RCCs) have been campaigning for him, which gave him a clear edge.Throughout the campaigns, Mr Museveni enjoyed incumbency and this was on show when he resorted to commissioning several projects such as markets in various town, which he said improve the economic standing of town dwellers.When the EC added Wakiso District to the list of areas where campaigns had been prohibited, Mr Museveni proceeded to launch the Kiira-Kasangati-Matugga road, which was seen by many as a way to circumvent the ban to campaign in the area.  The decision by the EC to limit the campaign period also favoured Mr Museveni, who was already known to the voters and also has a robust structure of the NRM, which is intertwined with the State.  According to the EC, the election had to be held within the first 30 days of the last 121 days of the presidential term.  Although holding the elections on January 14, wasn’t illegal, the 25 days which were cut off for campaigns would have been helpful to many of the novices in the race.Of the 11 candidates in the race, only Mr Museveni and the Democratic Party’s (DP) Norbert Mao had contested in previous races.  Mr Kyagulanyi, for instance, is popular because of his music but he needed more time to reach out to more Ugandans who had to embrace him as a politician.  He instead ended up doing a single rally in every district he was allowed to campaign in by security forces.  Although Mr Amuriat is the FDC party president and had previously been an MP representing Kumi County, he needed to interact with voters more, who were used to the party being presented in the previous presidential races by Dr Besigye.          The finance factorAmidst the elections, government released more than Shs1 billion under the so- called presidential initiative on job and wealth creation, commonly known as Emyooga.  Emyooga, which was launched by Mr Museveni in March last year, had the main objective of, according to its proponents, financially empowering groups in the informal sector, including restaurant owners, boda boda riders, women entrepreneurs, carpenters, salon operators, journalists, People with Disabilities, fishermen, mechanics, performing artists, taxi operators, among others.  With many Ugandans in the informal sector and with the money tagged to Mr Museveni’s “generosity”, this inevitably gave him a boost with these groups of people he had struggled to win over in 2016.   The money, interestingly, was by design to be given out at the constituency level, which is more of a political unit than an administrative one.  Each constituency was given Shs560 million, which apparently has been dished out to voters in a bid to entice them to vote for Mr Museveni.  In the middle of the campaigns, as candidates were running out of cash, the NRM secretariat gave their candidates at the parliamentary level the much needed cash relief.NRM candidates for District Woman MP slots were each given Shs53 million, those contesting for the special interest slots were given Shs60 million, and those for the main constituencies were given Shs43 million.  The NRM secretariat also bankrolled their village structures and also facilitated them in terms of bicycles and motorcycle, making their transport easy.editorial@ug.nationmedia.com