Bobi Wine is a King – Levixone 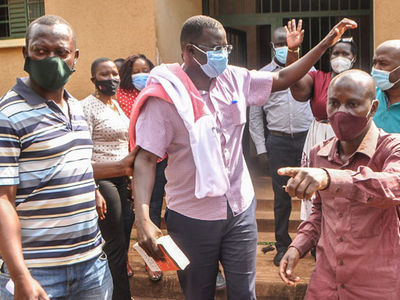 After spending eight days in both police detention and prison,  renowned human rights lawyer Nicholas Opiyo was yesterday granted a cash bail of Shs15m pending trial in regard to accusations of money laundering.Mr Opiyo was granted bail by Justice Jane Okuo Kajuga of the Anti-Corruption Court after presenting four substantial sureties, including former Uganda Law Society president Francis Gimara and Legal Aid Service Providers Network chief executive officer Sylvia Namubiru Mukasa.Likewise, his four sureties were each bonded at Shs100m not cash.Justice Okuo also ordered Mr Opiyo to deposit his passport in court to restrict his movements out of the country.The judge over-ruled the prosecution’s objection not to release Mr Opiyo, reasoning that he has a constitutional right to bail based on presumption of innocence.His lawyers Mr David Mpanga, Mr Robert Mackay and Mr Ellyson Karubanga argued that their client is a lawyer of courts of judicature, a human rights international award winner with substantial sureties. Advertisement

They had further argued that Mr Opiyo, as a lawyer, knows his obligations regarding bail.The prosecution led by Mr Moses Sande Baine, had objected to the release of Mr Opiyo on grounds that the offence he is facing is grave that attracts a maximum punishment of 15 years imprisonment and involves huge sums of cash.Mr Baine further argued that the investigations in the matter are still ongoing and that they have not yet recovered some of the exhibits from Chapter Four Uganda offices, where Mr Opiyo works as the executive director and that once released on bail, there were high chances of him interfering with the investigations.Mr Opiyo appeared before Justice Okuo by way of video conferencing at Buganda Road Chief Magistrate’s Court, hardly a week after a lower court remanded him to prison until January 11, next year.BackgroundMr Opiyo was arrested on Tuesday last week from a city restaurant by plain-clothed security personnel, and he was detained at Special Investigations Unit (SIU) in Kireka, Wakiso District on accusations of money laundering.He was later charged with money laundering, an offence that can only be heard by a High Court judgeMr Opiyo was arrested jointly with four other lawyers, Herbert Dakasi, Esomu Obure, Anthony Odur and Human Rights officer Hamid Tenywa. The four have since been released on police bond.Prosecution alleges that Mr Opiyo, on October 8, at ABSA Bank Garden City Branch, in Kampala District, acquired $340,000 (about Shs1.2 billion) through ABSA Bank account No.6004078045, in the names of Chapter Four Uganda, knowing at the time of receipt that the said funds were proceeds of crime.His arrest and eventual charging came at the time he was representing two NGOs; the Uganda National NGO Forum and the Uganda Women’s Network, whose bank accounts had been frozen by the Financial Intelligence Authority (FIA), over alleged involvement in financing terrorism activities.

By Patience Ahimbisibwe PATIENCE AHIMBISIBWE KAMPALA- The Electoral Commission (EC) on Tuesday  said it is ready to conduct elections for district chairpersons, councillors and mayors today. The polling materials, according to EC spokesperson Paul Bukenya, had already...

Bobi Wine is a King – Levixone