I was forced out of Mawogola North MP race – Sodo Kaguta

I was forced out of Mawogola North MP race – Sodo Kaguta 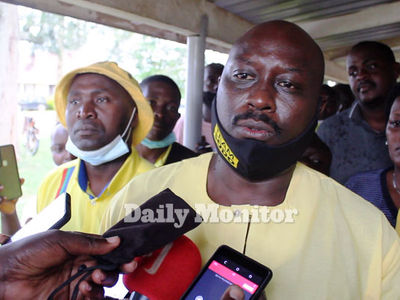 President Museveni’s young Godfrey Aine Kaguta alias Sodo has surprisingly withdrawn his candidature from the Mawogola North parliamentary seat race, just a few hours to the election.According Sodo, the decision to withdraw from the race follows a meeting he had with his family led by President Museveni and some of his (Sodo) campaign agents at State House, Entebbe on Sunday.“It’s true I have withdrawn from the race. On Sunday we had a meeting with my family; that’s President Yoweri Museveni, Salim Saleh, Michael Nuwagira alias Toyota and Sedrack Nowomugisha Nzaire and Muhoozi Kainerugaba. Also in attendance was Minister Sam Kutesa, his daughter Shartsi Musherure Nayebare and other family members and it was decided that I pull out,” he told NTV in an interview on Wednesday.“There were allegations from Kutesa that our supporters were attacking each other. Mzee (President Museveni) decided that I should pull out because if we were fighting then there was nothing we were going to do for people of Mawogola North Constituency,” he added.Sodo was, however, hesitant to tell his supporters to rally behind any candidate.“For President, I support Mr Museveni, then other positions, I leave the people to vote their best choices,” he said. Advertisement

Foreign Affairs Minister, Sam Kutesa introduces his daughter Shartsi Kutesa Musherure to residents in Sembabule town council on September 14,2019. Photo | Issa Aliga.Shartis Musherure Kutesa, a daughter to Sam Kutesa, the Foreign Affairs Minister has been Sodo’s main challenger in the race. Sodo is Musherure’s father-in-law since the first son Lt Gen Muhoozi Kainerugaba married her twin sister Charlotte Kutesa.Sodo had defeated Musherure in the hotly contested September 30, NRM primaries in the constituency. However, the top NRM leadership later tactfully denied Sodo the party flag and advised both candidates to stand as independents to avoid dividing party members in the constituency.Ms Musherure chose a ball as her campaign symbol while Sodo chose a bicycle.  But both contenders continued to use NRM colours and T-Shirts with NRM labels throughout the campaign period.Mr Vincent Kimbugwe, one of Sodo’s campaign agents, said Sodo’s withdrawal from the race is a big blow to his camp as he did not consult them.“We had hope that Sodo would win the race, but is it unfortunate that he has withdrawn from the race,” he said, adding: “At my personal level, I will remain committed to complete the task of uprooting Kutesa’s family out of Sembabule politics.”He said they are going to sit as Sodo’s supporters and decide on which candidate to support.Other contenders in the race include; Nyanzi Mwanje (NUP), Moses Lyaziof (FDC), and Salim Kisekka, Christine Nanyanzi, Hilary Tukunane, and Ismail Wagaba, all independents.editorial@ug.nationmedia.com

Gov’t: We Conduct Elections for Uganda not U.S.

Gov’t: We Conduct Elections for Uganda not U.S.