Rocky Giant is possesed by demons not drugs – Close Pal

I am not releasing any more music this year- Sheebah

Panic as Bobi Wine collapses in Nalufenya, smuggled out of country for treatment – Ekyooto Uganda 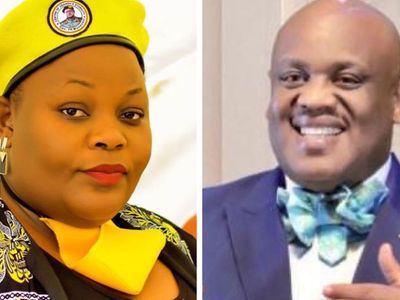 President Museveni’s adviser Catherine Kusasira and Pastor Franklin Mondo Mugisha were yesterday quizzed over their alleged involvement in activities that led to fleecing of thousands of people of millions of shillings with false promises.Ms Kusasira, who is also a musician, and Pastor Mondo reported to the State House Anti-Corruption Unit  where detectives said the duo was summoned on allegations of conspiracy to defraud more than Shs5b from people, falsely promising them bursaries, foreign trips to Israel and South Africa as well as benefits from government programmes under Operation Wealth Creation.The accused, each accompanied by their lawyers, separately arrived at the President’s Office before they were led to the detectives to record statements.The investigators, who declined to be mentioned because they are not allowed to speak to the public, said the two suspects were mentioned jointly with other persons, among them a senior police officer at the level of a commissioner and a private secretary to the president in charge of the youth.“These ones have duly responded to the summons but others are still at large,” the detective said.The group is jointly accused with Pastor Siraji Ssemanda of Revival Church Ministries in Bombo, Luweero District, who was on Monday, remanded to Kitalya Prison on 17 charges of obtaining money by false pretence.Pastor Ssemanda was arraigned before the Buganda Road Magistrate’s Court on two separate case files after he was arrested in a joint operation led by the head State House Anti-Corruption Unit, Lt Col Edith Nakalema, and the police at Mutukula border with Tanzania while fleeing Uganda.Grade One Magistrate Joan Cate Acaa remanded Pastor Ssemanda until December 2 after he denied any wrong doing on 16 accusations while another magistrate, Ms Gladys Kamasanyu, remanded Pastor Ssemanda until November 20 to allow the state ascertain the jurisdiction of the case regarding falsely obtaining more than Shs82 million from Tororo.It is alleged that between 2017 and August 2020, the directors of more than 400 private schools and 30,000 people, among them pentecostal pastors and believers from various parts of the country, were mobilised and duped into paying money to benefit from different government initiatives to improve livelihoods.It is said that the accused pastors and a lawyer, among other suspects, used President Museveni’s name, those of his wife Janet and brother Gen Salim Saleh to dupe the people into paying the money and later threatened them when they demanded accountability. Advertisement

Pastor Edward Masaba from eastern region, said Ssemanda, working with other accused persons, mobilised them to form an organisation, Hands Across the World Initiative Uganda. He said it is through this organisation, that they paid the money and were fleeced.It is alleged that in July 2017, the three suspects presented a programme called Israel Trip and sought 200 people to take to Israel. Fraud claimsFor the South Africa trip, Pastor Edward Masaba said they mobilised more than 1,000 people to travel for a conference and each was asked to pay Shs50,000 but they were instead given certificates despite telling them that flights and other requirements had been catered for. “We had special trips and a total of 150 people each paid Shs500,000 for those people who were going to work with the president (of the organisation) who was me. They said when we go out, we would need work permits and they wanted 50 people who were supposed to be ministers. And we were each supposed to pay Shs125,000, which was paid for work permits because they would be going out,” he claimed.Pastor Masaba said in October 2017, they also mobilised and registered 279,606 needy people countrywide.

Rocky Giant is possesed by demons not drugs – Close Pal

By Ambrose Musasizi Voters in Rakai District have asked Gen Mugisha Muntu to prioritise pledges the current government has failed to fulfil in the past years if he is elected president in next year’s elections.Speaking...

Mityana hospital on the spot over rising maternal deaths

By BARBARA NALWEYISO The management of Mityana hospital is on the spot over the increasing number of cases of maternal deaths registered at the facility as a result of alleged negligence by health workers.Available records...

By Monitor Team The Inspector General of Police Martin Okoth Ochola has warned presidential candidates and other political activists and aspirants against defying the Electoral Commission (EC) guidelines as campaigns gain momentum. “Unlike 2016, this time...

By DERRICK WANDERA By Job Bwire National Unity Platform (NUP) presidential candidate Robert Kyagulanyi popularly known as Bobi Wine has been arrested in Luuka District where he had been scheduled to address his supporters as...

By David Awori Two police officers attached to Busia Central Police Station have been arrested and handed over to the Chieftaincy of Military Intelligence (CMI) headquarters in Kampala over the fatal shooting of a Uganda...