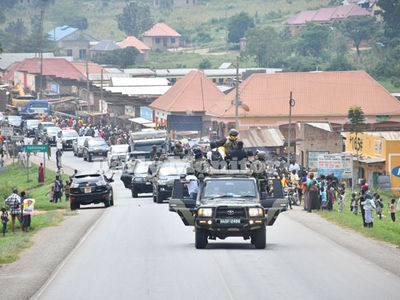 President Yoweri Tibuhaburwa Museveni On January 21 returned from his ancestral home, Rwakitura, to Kampala with a victory drive exactly a emerging president elect with a majority 58.8% votes through a January 14 election.

Motor-cyclists ride in front of the president’s convoy, destined for Kampala from Rwakitura, January 21, 2021.PHOTO/KELVIN ATUHAIRE.The president who made several stop overs along the Masaka-Kampala road was welcomed by crowds along the road.

Hundreds of ruling National Resistance Movement (NRM) party supporters stand by the highway sides as president elect Yoweri Kaguta Museveni’s convoy drives through, January 21, 2021. PHOTO/KELVIN ATUHAIRE.A flock of his supporters poured into the streets at different points in various districts- in a bid to secure the best spot to see president Museveni, who drove for over 5 hours along the Masaka-Kampala road.

The road stretching from Rwakitura, through Lyantonde, Mbarara and Masaka districts to Kampala- became a hive of activities, thronged by masked and unmasked masses whilst Museveni’s convoy snaked through basking in glory amid a Covid-19 outbreak.PHOTO/KELVIN ATUHAIRE. Advertisement

Along the road many cars had parked to pave way for the president. Away from the usual, this time round the presidential convoy was not on a neck speed drive, but it trailed through the crowds, hitting runs to subsequently planned stop-spots.

Women sweep the road as the Presidential convoy drove through, January, 21 2020. PHOTO/KELVIN ATUHAIRE.Breaking the norms, many people leaned, touched on cars in the presidential convoy whilst they also had an extremely close glance at the Mr Museveni who was accompanied by the first lady, Janet Kataha Museveni.From their car, they waved and smiled back to the people craving to see them. Most of the people were not pushed away by the president’s security detail.Another of the unusual things on the day was that private media was allowed to be part of the presidential convoy. Mounted on one of the security jeeps and drone bus, journalists were on note to capture every moment.

Hundreds of ruling National Resistance Movement (NRM) party supporters stand by the highway sides as president elect Yoweri Kaguta Museveni’s convoy drives through, January 21, 2021. PHOTO/KELVIN ATUHAIRE.Meanwhile, in other areas the president popped out of the sunroof of the Toyota land Cruiser and either spoke to or addressed waiting crowds.

President Museveni makes his last address at City square, Kampala, before entering State house Nakasero, January 21, 2021. PHOTO/KELVIN ATUHAIRE.Mr Museveni will take presidential oath in May 2021, in a term that will see him extend his reign as president to 40 years.