Half of Ugandans say physical, emotional and sexual violence have gotten worse in their communities during the Covid-19 pandemic- Twaweza report

Opinion: Why women deserve to be celebrated 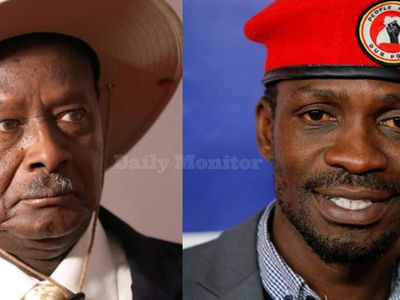 The country’s electoral body, accused of electoral fraud by opposition, became a target of sad commentary to the opposition after “irregularities” were sighted in presidential poll results, tailored with a cruel atmosphere towards government nonconformists leading to polls held amid a roaring Covid-19 pandemic.“My life is in danger having survived several assassination attempts and being attacked by soldiers at my home. Several of my supporters have been killed and thousands arbitrarily arrested,” Bobi Wine, who came second, said Friday.

National Unity Platform (NUP) presidential candidate, Robert Kyagulanyi Ssentamu, alias Bobi Wine, looks on after Uganda People’s Defence Forces (UPDF) soldiers invaded his home in Magere, Wakiso District on Friday. Mr Kyagulanyi said the soldiers forced themselves in his compound and beat up a member of his private security team as they kept his home under siege while results were being tallied. PHOTO/COURTESY.The United States (US), European Union (EU) and other international apparatus had earlier raised alarm over failed transparency in Uganda’s election.“It is not possible for the US to meaningfully observe the conduct of Uganda’s elections at polling sites across the country,” US ambassador Natalie E Brown said Wednesday whilst announcing cancellation of a diplomatic observer mission of Uganda’s election.Bobi Wine equally dismissed the results as early as Friday saying, “EC results are “fake. EC chairperson, Justice Simon Byabakama disdainfully ignored malpractices that occurred during elections, including those at the expense of armed forces but he is spinning elections in Gen Museveni’s favor.”Bobi Wine said he was intending to release vivid evidence for his claims once internet connectivity was restored.“Armed security officers gave people pre-ticked ballot papers in addition to intimidating voters by their presence and influencing the electorate to vote in favor of incumbent president Museveni,” Bobi Wine alleged before EC chairperson Byabakama challenged him “To show how results were released contrary to what was in 34,684 Result Declaration Forms.”Bobi Wine, who results show garnered some grass-root support since arriving on the political scene, told his backers that he was hell-bent towards pushing for an end to Mr Museveni’s 35 years at the helm of Uganda’s top leadership spot.“Our battle is just beginning and far from over,” he remarked, Friday, during a press conference at his home in Magere, Wakiso district.In avoidance of any clear case of history, the run to this year’s election claimed over 60 people in the face of police and army brutality in a politically divided nation that now has to brace for five more years of a revolutionary’s presidency.*The stats carried in this story are of the final batch of provisional results released by the Electoral Commission on January 16, 2021 (3:35pm Local EAT)dajuna@ug.nationmedia.com| editorial@ug.nationmedia.com

TSC: How Teachers Can Collect Pensions in Multi-Billion Payout

By Tonny Abet By Stephen Otage Government yesterday received 100,000 additional doses of Covid-19 vaccine which were donated by the Indian government. While addressing journalists at Entebbe International Airport after receiving the consignment on Sunday,...

TSC: How Teachers Can Collect Pensions in Multi-Billion Payout