Musoke-Kibuuka: A judge ‘punished’ for his frankness

“Do Not Open!” NCHE Tells Universities

Musoke-Kibuuka: A judge ‘punished’ for his frankness 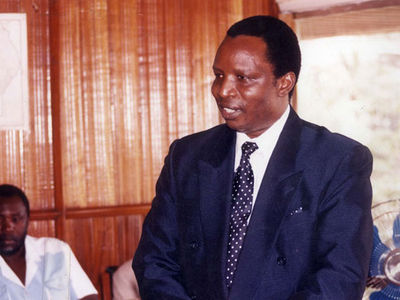 At the mention of Justice Vincent Musoke-Kibuuka’s name, one would quickly associate it with an outstanding arbiter in resolving election disputes without fear or favour.His candle burnt out last Thursday after he succumbed to kidney complications at Nsambya Hospital aged 71.After the 2011 General Election, Justice Musoke threw Vice President Prof Gilbert Bukenya out of Parliament for bribing voters to retain Busiro North seat in Wakiso District. Prof Bukenya’s victory had been contested by a member of Democratic Party, Mr Kasta Hussein Bukenya.“Section 61 (1) (c) of the Parliamentary Elections Act is very problematic. Even if one bribery allegation is proven beyond reasonable doubt, this alone affects the elections in a substantial manner,” Justice Musoke ruled in 2011.“In the result, the petition is dismissed as against the second respondent (Electoral Commission). It succeeds against the first respondent (Prof Bukenya) and the following orders are made; the election is set aside and the petitioner shall receive his costs from the first respondent,” Justice Musoke ordered.In the same year, Justice Musoke handled another controversial election petition of Rubaga North constituency. The petitioner, DP’s Moses Kasibante, had appealed the Mengo magistrate’s court declaration of his rival Singh Katongole Marwaha (NRM party) as the winner of the parliamentary election after a controversial vote recount. Mr Kasibante had won the polls but upon the vote recount on orders of then Chief Magistrate of Mengo Court, Mr Phillip Odoki (currently a High Court judge), Mr Katongole was announced winner. Advertisement

In his verdict, Justice Musoke ruled that the illegal recount conducted by the returnFebruary 28, 2011,  did not affect the declaration of Mr Kasibante as winner of the parliamentary election in Rubaga North.“It follows that because his declaration as winner (Mr Katongole) of the parliamentary seat was based upon the results of an illegal recount, which had no effect in law, the first respondent has never been validly elected Member of Parliament for Rubaga North Constituency,” Mr Musoke ruled.Advocate and veteran journalist Gawaya Tegulle in his opinion letter that ran in this publication in September last year praised Justice Musoke.  Mr Tegulle argued that despite Kibuuka serving as High Court judge for about 20 years with utmost professionalism, he was not promoted to Court of Appeal by the President because the court is strategically important to the State.“Judicial officers don’t serve till kingdom come; they eventually step down when retirement rings the bell. But there are those that you wish had stayed longer. One of those is a quiet High Court judge, Vincent Musoke-Kibuuka…” he wrote.  Because of his water-tight judgments in electoral petitions, his decisions were never overturned on appeal by higher courts.About Justice Musoke-KibuukaBorn in 1950, the 71-year-old jurist hailed from Masaka Sub-region. He was a graduate of Bachelor of Laws from Makerere University and was among the first students to join the Law School when it started in 1960s.He joined the Law Development Centre for his post graduate diploma in legal practice.  His first job was being a  junior state attorney in the Ministry of Justice in 1975. In 1976, he was promoted to State Attorney. He was again promoted to Senior State Attorney in 1979. He worked as a legal assistant to the Minister of Foreign Affairs from 1979 to 1980 and, thereafter, served as the private secretary to the Prime Minister from 1981 to 1985.Thereafter, Kibuuka was promoted to Principal State Attorney. He pursued a Master’s of Laws from Queen’s University Kingston, Ontario-Canada between 1989 and 1992. The Judicial Service Commission, appointed Kibuuka a judge of the High Court on February 24, 1995. He served for 20 years until April 5, 2015 when he opted for early retirement due to ill health.editorial@ug.nationmedia.com

By Monitor Team Government yesterday warned Ugandans using Virtual Private Networks (VPN) that it has acquired capacity to monitor and switch off the sites of the VPN service providers.Government also said they will hunt down...