I Didn’t Want to Be A  Singer — Kabako

Maro Bashed for Promoting Song Instead of Joining ‘Struggle’ 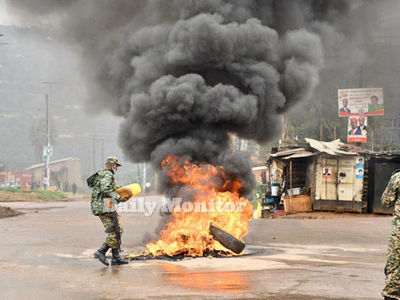 Uganda People’s Defence Force (UPDF) have warned politicians against flouting Covid-19 restrictions issued by government and its relevant agencies as well as the local laws.“If this defiance does not stop, we have a task to make sure that the laws are not flouted. We have not started implementing Covid-19 SOPs during the election period and we shall not stop,” warns the UPDF spokesperson, Brig Flavia Byekwaso.“No amount of pressure is going to bar us from doing the right thing,” Brig Byekwaso added.The army spokesperson was appearing on a political show hosted on state broadcaster, Uganda Broadcasting Corporation (UBC), late Wednesday night.Re-echoing bits of scientific truism, Brig Byekwaso said, “What happened on Wednesday is one of the things that are going to put the country at a high risk of the pandemic. It is so disheartening that the people who want to be leaders have not ‘appreciated’ what the country is going through.”Asked by show host Charles Odongtho – why security forces have kept a blind eye towards other massively attended political rallies, especially by the NRM supporters, Brig Byekwaso responded: “Two wrongs do not make it right. I was not there to see what Bebe Cool or Tanga Odoi did. They should be held responsible for what they did.” Advertisement

Brig Byekwaso further explained the precedent set by the likes of Tanga Odoi and Bebe Cool should not set a leeway for aspiring leaders who want to have a health population.

In the latest spate of UPDF cautions to politicians, army spokesperson, Brig Flavia Byekwaso warned them against flouting Covid-19 restrictions. PHOTO/COURTESYIn an attempt to justify events resulting from the Wednesday arrest of National Unity Platform (NUP) presidential candidate, Mr Robert Kyagulanyi aka Bobi Wine, “We started because they started,” she said.“You know when you want to do something, you first warn. We cannot continue postponing it [arrest] after we have kept warning and warning you. That is why it had to happen yesterday,” Brig Byekwaso explained Mr Kyagulanyi’s arrest.  Her remarks came just moments after her counterpart in Police, Mr Fred Enanga had uttered statements alluding to a Wednesday morning warning from the Inspector General of Police (IGP).“IGP Martin Ochola indicated that we are coming up with tougher measures to start arresting,” Mr Enanga said, adding that, “these are normal operations.”On November 3, incumbent president and National Resistance Movement (NRM) presidential candidate Mr Yoweri Tibuhaburwa Museveni- warned that his regime had intent to crackdown people, including politicians flouting Covid-19 guidelines and those who want to disrupt the supposedly peaceful election process.November 18 would see Mr Kyagulanyi and the Forum for Democratic Change president Patrick Amuriat become the first pair as victims of fate.The two presidential candidates were viciously arrested and detained in different locations on grounds that they had flouted Covid-19 restrictions, prompting at least three of the other 11 presidential candidates to suspend their campaigns amid wild-wide spread protests in several parts of the country. While Mr Amuriat was released last night, Mr Kyagulanyi was still in detention at Nalufenya by press time.dajuna@ug.nationmedia.com | editorial@ug.nationmedia.com

By Job Bwire Police have said the death toll in yesterday’s protests that broke out following the arrest of presidential candidate, Robert Kyagulanyi alias Bobi Wine, is now seven with 45 people nursing injuries.“As of yesterday...

By Alfred Tumushabe By Rajab Mukombozi Independent Presidential candidate Mr Willy Mayambala on Wednesday failed to campaign in South Western Uganda due to lack of fuel.He was expected to campaign in the districts of Mbarara,...

By Patience Ahimbisibwe The Electoral Commission (EC) on Wednesday settled fears of who is going to print next year’s presidential ballot papers after it awarded the contract to an Abu Dhabi-based firm, ending months of...

By Monitor Reporters Independent presidential candidate Lt Gen Henry Tumukunde has been blocked from accessing Bundibugyo District to address his supporters.According to the programme released by the Electoral Commission (EC), Gen Tumukunde was supposed to...