NRM teams up with DP to beat Nambooze in Mukono

NRM teams up with DP to beat Nambooze in Mukono 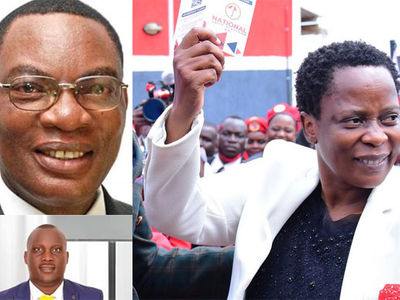 In a rare show of solidarity, a section of supporters and leaders of the ruling National Resistance Movement (NRM) have teamed up with their counterparts in the Democratic Party (DP) to unseat the Mukono Municipality MP, Ms Betty Nambooze. Ms Nambooze, who is seeking a third term in Parliament, together with 10 other legislators defected from DP to the National Unity Platform (NUP), citing lack of internal democracy in their party.Speaking on condition of anonymity, top NRM leaders in Mukono claim they cannot support their party flag bearer Abbas Ssozi because he cannot defeat Ms Nambooze.They, therefore, decided to rally behind Mr George Fred Kagimu of DP, who is Ms Nambooze’s main challenger.Other contenders are Mr Dunstan Eddy Mbogo of Forum for Democratic Change (FDC) and independents; Zirimala Kiggundu, Edward Balikuddembe, Hadijja Ndagire Nakanja and Seera  Nishaba . “When we rally behind Kagimu, it is going to be easy to defeat Nambooze. She has played a big role in dividing and creating enmity among people in Mukono and is also a stumbling block to the development of this area,” an NRM leader says. Advertisement

Mr Moses Ssendagire, a resident of Butebbe Village and an NRM supporter, concurs.  “Even though many Opposition diehards still need her (Nambooze) in that seat, I call upon all NRM supporters to come together and vote for Kagimu so that we kick her out,” he said. Mr Abed Ndawula, another NRM supporter and a resident of Kigombya Village, says he will vote for Mr Kagimu since he has performed well as a municipality mayor.“Mr. Kagimu is the only serious competitor in this race and if we don’t join hands to support him, Ms Nambooze will definitely retain that seat,” he says.Mr Jamada Kajoba, the Mukono Municipality deputy mayor, confirms that some NRM supporters are rallying behind Mr Kagimu after realising that he is suitable replacement for Ms Nambooze. “Kagimu has served well as a mayor and he has accommodated all people from different parties, so we should reward him by sending him to Parliament,” Mr Kajoba says.However, Ms Alice Nazziwa, a resident of Watoni Village and member of NUP, says it will be a miracle if Mr.  Kagimu defeats Ms Nambooze . “She is a kind of lady who cannot disappoint us in Parliament as many MPs do. So, we want her back and we are seriously campaigning for her,” she says.Mr Emmanuel Mbonye, the district speaker, says the race is tight because the two main contenders have overwhelming support.“If people want propaganda, let them retain Ms Nambooze, but those who want services delivered, Mr Kagimu is the right candidate,” Mr Mbonye says.Ms Nambooze was not readily available to comment on the matter, but her husband, Mr Henry Bakireke, claimed they also have information that NRM top members in the district are financially facilitating Mr Kagimu to disorganise their camp ahead of the polls.“The NRM people are the ones who convinced Mr Kagimu to contest against my wife, we even have information that they bought him a vehicle to help him during these campaigns, but we are not shaken,” Mr Bakireke claimed.  We could not verify the claims.During a recent campaign meeting, Ms Nambooze said she brought Mr Kagimu into politics and massively campaigned for him to become the mayor and wondered why he has tuned against her.However, Mr Twahir Ssebagala, the district NRM chairperson, says party members supporting Mr Kagimu are doing it out of their own will.“People have different interests, but as a party, we have our own candidate and there is no need of supporting a rival candidate,” he says. Mr Kagimu says he decided to challenge Ms Nambooze because he wants to deliver services.“Mukono Municipality needs politics of service delivery and lobbying and that is what I am promising by people,” he says.Previous electionsMr George Fred Kagimu has served as Mukono Municipality mayor since 2016. Ms Nambooze first served as Mukono North MP in 2010 after beating her rival, the Rev Peter Bakaluba Mukasa of NRM.The Supreme Court found the Rev Mukasa guilty of having rigged the 2006 polls and annulled his election. She later shifted to the then newly create Mukono Municipality where she emerged winner. During the 2016 General Election, Ms Nambooze who was on a DP ticket, won the race with 35,341 votes, followed by Ms Fatuma Ndibasa Nabitaka (NRM) who polled 23,129 votes.

Kasuku attacks Bebe Cool brands him as a ‘selfish’ person

Kasuku attacks Bebe Cool brands him as a 'selfish' person