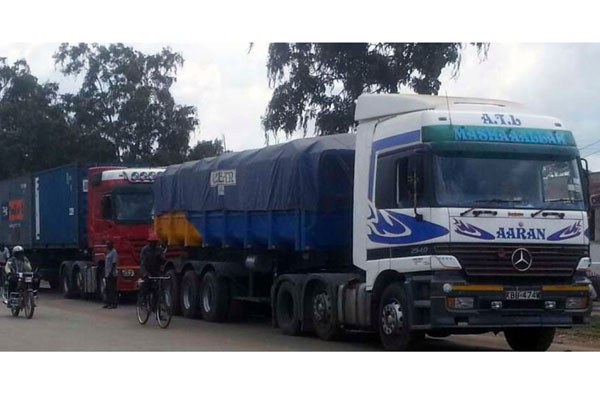 Kenyan truck drivers say thugs mounting illegal roadblocks on South Sudan’s main highway give them nightmares every time they have an assignment in that country.
The thugs, often gunmen, have been looting, maiming or killing drivers, and sometimes burning their vehicles. The excuse used to be the lawlessness created by the country’s enduring war since 2013 but after it formed a government of national unity last year, the question of the cause of the violence remains.
“We are used to roadblocks mounted by the police. This is routine in Kenya and Uganda. In South Sudan, you can’t be sure if they are police or thugs,” Mr David Masinde, chair of the Kenya Drivers Association, told the Nation on Wednesday.
As head of the official lobby for long distance drivers in the country, he has had sleepless nights over the past one week. Two of his colleagues were killed in a horrible incident along the Nimule-Juba Highway, South Sudan’s main supply artery, but which is now a dangerous road.
“Their trucks were set on fire. Two of the drivers were burnt beyond recognition. Two others went missing. Thanks to God, one of them has contacted us saying he is safe,” he said.
The incident brought to 10 the number of drivers brutally killed along the highway since the start of March. Six of them were Ugandans while the nationality of the other two remains undetermined.
Advertisement

Important highwaySouth Sudan relies on the highway that runs from the Nimule border with Uganda to Juba for supply of food, petroleum products and other imported goods from Kenya and Uganda or beyond. It is one of the few tarmacked roads in the country but the traffic also attracts criminals.
Juba-Nimule, South Sudan’s first ever highway, was built in 2012, just two years after the country gained independence from Sudan after 21 years of brutal civil wars.
The 192-kilometer road was built using a grant from the government of the United States.
The road, known as Highway A in Juba, continues southward towards Nimule as Highway A43.
Juba-Nimule Highway connects the capital of South Sudan to the border with Uganda, the main route Kenyan drivers use to ferry transit goods to South Sudan.
Since conflict broke out in 2013 and 2016, many South Sudan border highways were closed due to insecurity, leaving Juba-Nimule Highway as the only route through which the country receives goods.
The drivers now say they will be dumping the goods at the border warehouses in South Sudan until their security is guaranteed. The outcome could be delayed deliveries and suffering for businesses.
Security not guaranteedDennis Ombok, chief executive of the Kenya Transporters Association, the lobby for truck owners, said they advised members to avoid the highway as “there is no guaranteed security”.
“Transporters are advised to withdraw their services with immediate effect until security is guaranteed. [To] those already on the way, we advise that you arrange for your clients to collect their goods at the customs yard at the Elegu border,” Mr Ombok said in a notice to members.
Ugandan truck drivers also announced that they will stop transporting cargo to South Sudan due to rising insecurity along major highways. Their lobby said on Wednesday that eight members had been killed along Yei-Juba road.
While appealing for heightened security, Mr Masinde said: “We are ambassadors of Kenya when we are out there. We need help from the government. The South Sudan highways are especially dangerous. Perhaps regular security escorts will be needed.”
He added: “The incident in which our two colleagues were killed involved a road block at which they stopped thinking they were being regularly checked.  It had actually been mounted by gunmen.”
Last week, Kenya’s Foreign Affairs ministry said stranded drivers should contact the embassy in Juba for assistance. In the meantime, however, it advised drivers not to use the highway.
“The Government of Kenya is concerned by growing attacks against Kenyans and their interests in South Sudan,” a statement from the ministry said.
“The government is working closely with the Government of South Sudan to ensure that Kenyan interests are protected and that perpetrators of attacks against Kenyans are prosecuted to the fullest extent of the law.”
Rebel groupsSouth Sudan may have a unity government but the UN admits sporadic violence, illegal guns and grumbling rebel groups, who have refused to sign the peace deal, have ensured continual insecurity.
A report released last week by the UN Mission in South Sudan (UNMISS) said detached militia groups were responsible for as many as eight in 10 civilian deaths in South Sudan last year.
The UNMISS Annual Brief on Violence Affecting Civilians, documented the killing of 2,421 civilians in 2020, more than double the previous year. Just over 1,500 people were injured, up from 866.
“While the figures represent a significant increase in violence compared to 2019, the clashes were concentrated in just 13 per cent of the country’s 540 payams, and largely involved community-based militias rather than conventional parties to the conflict,” reads the UNMISS report.
It did not specify whether truck drivers were included in the tally. There are suggestions the militia are maintained by political elites for personal interests.
In September 2016, at least seven people were killed in attacks on vehicles along Juba-Nimule road.
Three months after the September attack, another attack  at Ame Junction left at least five people dead and many wounded. In that incident, gunmen ambushed a passenger bus.
Past incidentsAfter the 2016 clashes, the then Salva Kiir government directed the National Security Service to provide escorts for  all passenger buses plying the Juba-Nimule highway.
Uganda’s military also guarded their drivers at the height of the war.
Yet in June 2017, a convoy carrying civilians, escorted by the then Sudan People Liberation Army, was ambushed by opposition forces along Nimule-Juba Highway.
The incident left at least 14 people killed, including high-ranking military officials allied to the regime in Juba.
In September 2020, an attack on a passenger bus along the highway left two people dead and five reportedly abducted by the attackers.
In August last year, the Juba police service said it arrested eight suspects in connection with last week’s attack on a passenger vehicle along Juba-Nimule Highway.
Nobody has been prosecuted to date, but officials in Juba have promised to investigate the attacks.