Bobi Wine Uses Juju, He has A Shrine – Promoter Bajjo

Yiga Wanted to Marry Me, But My Parents Refused — Maggie Kayima 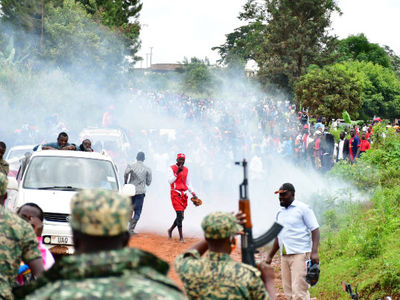 Opposition presidential candidates have complained to Electoral Commission (EC) about police brutality and being denied access to the mass media during the campaign trail. Six of the 11 candidates, who attended yesterday’s meeting with EC, said they had been teargassed and brutalised by police. Only Mr Willy Mayambala declined to speak to the media after the meeting. The EC had invited the candidates for a meeting at its headquarters in Kampala to warn them against violating standard operating procedures (SoPs) for prevention of Covid-19 during the campaigns.  The EC said some candidates were addressing crowds instead of controlled meetings, were not enforcing wearing of masks and other SoPs during the campaign trail. It said such violations could trigger an epidemic spread of the coronavirus, and warned that it will take action against non-compliant candidates.    The National Unity Platform (NUP) secretary general, Mr David Lewis Rubongoya, said their candidate Robert Kyagulanyi, alias Bobi Wine, has been teargassed in every district he has gone to since he started the campaigns about two weeks ago. His complaint was echoed by Forum for Democratic Change (FDC) representative Bob Barigye, who warned that the party will defy some of the election guidelines they believe are intended to stop change of leadership through a ‘peaceful campaign’. All the candidates Daily Monitor spoke to yesterday said people in places where they have so far campaigned were not given masks contrary to government claims that they issued them.“We are going to defy some of these things. We come here to dialogue but EC officials come with a position. They have told us to give out masks. That is the responsibility of government. It has exposed them that they didn’t give out masks. Advertisement

They are telling us that we hold meetings of not more than 200 people. This is impossible. We are going to defy some of these [rules],” Mr Barigye said. He added: “The police are too brutal. You don’t negotiate. You don’t dialogue. Even in instances where you would have talked to people, you don’t. The only talking is tear gas. We are disappointed in you, but we are not going to sit back and cry.”ComplaintsIndependent presidential candidate John Katumba accused police of blocking him from campaigning in Maracha, Yumbe and Koboko districts while his colleague, Mr Joseph Kabuleta, who was represented by his agent, Mr Denis Onyigi, reported of impassable roads. The EC chairman, Justice Simon Byabakama, said they will do what is within their means to ensure candidates and their supporters are protected from contracting the coronavirus. Justice Byabakama said the meeting was held with presidential candidates and their agents who have flouted the Covid-19 SoPs. The candidates that attended the meeting include Mr Katumba and Mr Mayambala while Mr Kabuleta, Mr Kyagulanyi, Mr Amuriat and Lt Gen Henry Tumukunde sent representatives. However, Justice Byabakama said candidates who didn’t show up will be invited at a later stage. He did not give a specific date. He said their mobilisers were not following the Covid-19 rules. Mr Byabakama denied that the electoral guidelines are being applied selectively. He asked candidates to take individual responsibility to protect themselves and their supporters against covid-19. “We are not short of penalties. Negotiation will be our primary tool, but where that doesn’t work out, the commission will be left with no option but to apply draconian methods. For now, we have urged the candidates that if you don’t comply, we will use other means to ensure you comply and I don’t want to say the other means,” Justice Byabakama said. He added: “I want to urge the candidates, especially those inclined to defy [the rules] that it serves no purpose if you cooperate with EC and follow the SOPs in place to stop the spread of the virus. You will not have a problem with law enforcement officers. You won’t have a problem in carrying out campaigns in a manner prescribed.”Police reaction The police director of operations, Mr Edward Ochom, asked candidates to follow the EC campaign schedule. He cited FDC team who have insisted on being in Kitgum today yet the timetable shows NRM’s Museveni is the one expected to be in the district. He said police have been using non-lethal methods to disperse crowds but they can also use batons and live bullets. “How do you expect police to behave? If they insist, we have no option but to disperse them. There are particular parties which don’t want to listen. Why are others not teargassed? Why is it NUP and FDC? You saw what happened in Mbale. Whatever is done must be done in an organised manner. In this Covid-19 era, it is our duty not to allow mass rallies,” Mr Ochom said.“Our officers have tried to restrain themselves yet many of our officers have been hurt. The best we have done is tear gas,” he added.pahimbisibwe@ug.nationmedia.com

Residents of Busoga have asked National Unity Platform (NUP) candidate Robert Kyagulanyi, alias Bobi Wine, to tackle poverty and the sugarcane crisis in the sub-region.The locals say many people have been impoverished due to limited...

By Tobbias Jolly Owiny President Museveni has said political parties built on tribal lines can never win an election in Uganda because no tribe can guarantee more than 50 per cent of the total valid...

By Monitor Reporters By MONITOR TEAMKASESE/BUNYANGABU- Independent presidential candidate, Lt Gen (Rtd) Henry Tumukunde, has warned security against brutalising his supporters during his campaigns.Gen Tumukunde started his campaign trail in the Rwenzori sub-region yesterday with...